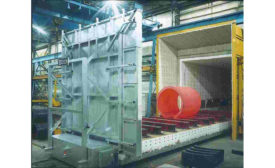 Can-Eng Furnaces International Ltd. has been awarded a contract to design and manufacture two 50,000-pound/hour car-bottom furnaces for one of the world’s largest metals and mining companies. These custom-engineered furnaces will support the manufacture of critical metal hot-rolling machine components used in the production rolling of high value-added automotive steel sheet and plate. The two systems, although located side by side, will utilize completely independent control systems to allow flexibility for schedule and maintenance. Both furnaces will be interconnected to the larger plant-wide system for data acquisition and trending capabilities.

ArcelorMittal will invest approximately $1.2 billion in decarbonization technologies at its Asturias plant in Gijón, Spain. The project will reduce CO2 emissions at the company’s Spanish operations by up to 4.8 million metric tons, which represents approximately 50% of emissions, within the next five years. At the heart of the plan is a 2.3 million-metric-ton green-hydrogen direct reduced iron (DRI) unit, complemented by a 1.1 million-metric-ton hybrid electric-arc furnace (EAF). This starts the transition of the Gijón plant away from the blast-furnace and basic-oxygen-furnace steelmaking production route to the DRI-EAF production route, which carries a significantly lower carbon footprint. The new DRI, which ArcelorMittal says will be the first of its kind in Spain, and EAF will be in production before the end of 2025.

U.K.-based Wallwork Group invested approximately $900,000 to purchase two Rübig plasma nitriding furnaces for the heat treatment of new and replacement components in the aerospace and automotive industries. The first furnace is scheduled to be installed in Wallwork’s Cambridge plasma nitriding center in August. The company is also adding a dedicated area for inspection of case depth, structure and other quality aspects of the nitriding process at the facility, which will have six operational plasma nitriders. 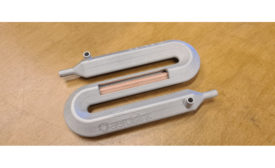 Desktop Metal acquired Aerosint, a provider of multi-material deposition systems for powder-based additive manufacturing (AM). Based in Belgium, Aerosint offers a powder deposition system based on a proprietary digital process that selectively deposits two or more powders to form a single, thin powder layer containing multiple materials. The company’s patented selective powder deposition technology enables full three-dimensional control of material placement during printing. It can be integrated into any powder-bed AM process, such as laser powder-bed fusion, binder jetting, high-speed sintering or selective laser sintering. This multi-material approach to powder deposition is designed to support high-speed printing of a broad range of metals, polymers and ceramics.

Air Liquide to Supply Industrial Gases to Steelmaker in China

Air Liquide and Jiangsu Shagang Group, the largest private steel enterprise in China, signed a long-term agreement for the supply of industrial gases in Jiangsu Province, China. Air Liquide will invest approximately $118 million to build an air-separation unit (ASU) on the site, where it already operates two other ASUs. Under a 20-year contract, Air Liquide will build, own and operate the ASU, which has a daily capacity of 3,800 metric tons of oxygen. The company says it will be the largest single ASU for the steel industry in the world. When it starts up at the end of 2023, it will bring the total installed oxygen capacity to over 8,000 metric tons per day on the site. 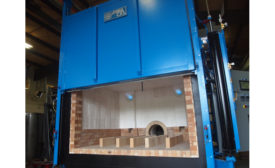 Armil CFS Inc. shipped two natural-gas-fired box furnaces with integrated afterburners to a West Coast manufacturer of aerospace components. The furnaces, which have an operating temperature range of 450-1800°F with +/-25°F uniformity in the work zone, will be used to burn out and preheat investment casting molds. The Tru-Heat furnaces have an inside chamber size of 8 feet wide x 7 feet deep  with a working height of 4 feet. For energy savings, they are programmed with weekend mode and automated afterburner idle.

Rio Tinto started operations at a new commercial-scale demonstration plant to produce high-quality scandium oxide at its Rio Tinto Fer et Titane (RTFT) metallurgical complex in Sorel-Tracy, Quebec. Six employees have been hired to operate the plant, which uses a process developed by RTFT to extract high-purity scandium oxide from the waste streams of titanium dioxide production without the need for any additional mining. According to Rio Tinto, customers will benefit from a North American supply of scandium oxide as an additive to produce high-performance alloys. Commissioning work has started as production ramps up to a capacity of 3 metric tons of scandium oxide per year.

Solar Manufacturing Inc. of Sellersville, Pa., announces the receipt of US Patent No. 11053560 issue date July 6, 2021. The patent covers the use of a full isolation power transformer for use with a 600-HP, 460-volt motor and with an ionizing gas (such as argon) to prevent electric-motor ground fault and failure, with additional solid-state circuit protection, in conjunction with a vacuum furnace gas-quench system. 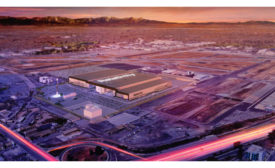 Relativity Space, the first company to 3D print an entire rocket, announced a major expansion of its operations in Long Beach, Calif., with a new, 1,000,000-square-foot headquarters factory at Goodman Commerce Center. Relativity Headquarters will have capacity for over 2,000 employees, a metallurgical laboratory, DMLS printers and a mission control center. It will also have dozens of the company’s proprietary Stargate 3D printers, which it says are the largest metal 3D printers in the world. With software changes, Relativity’s Stargate printers are capable of printing both Terran 1, the world’s first entirely 3D-printed launch vehicle, and its fully reusable, entirely 3D-printed rocket, Terran R. Move-in is scheduled for January 2022. 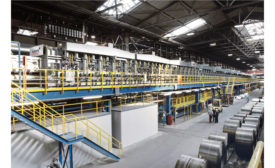 Tenova received a contract for the supply of a decarburization and coating line (DCL) from VIZ-Stal (NLMK Group) for its plant in Ekaterinburg, Russia. The line will provide one of the important stages of grain-oriented (GO) electrical strip production. The contract includes the engineering, supply and supervision services of the heat-treatment furnace; mechanical and process equipment; and the related electrical, measuring and control systems. The DCL line is scheduled to start production by the end of 2021.