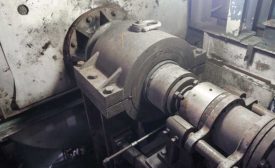 Toward the end of 2019, the plant engineer at South Carolina-based PBI® Performance Products Inc. made a startling discovery. The Graphalloy bushings within their 38-year-old reactors had been operating without failure for well over two decades!
Larry Canterbury Eric Ford
No Comments

The PBI facility, as part of their planned maintenance period, worked on one of the two reactors late last year. During the cleaning process, high-pressure water damaged one of the bushings on one of the reactors. Two of these specially made GRAPHALLOY® bushings are used in each reactor, which makes the polymer used to produce the fibers at the plant.