Nucor Steel has an extensive special bar quality (SBQ) steel program that dates back to the conversion of its plants in South Carolina, Tennessee and Nebraska to handle the product decades ago. Additive Drives the Adoption of CT for Nondestructive Thermal Inspection

Computed tomography (CT) provides unparalleled insight into a 3D structure produced by additive manufacturing, including its density at every point throughout its volume.
Meghan Meinert
No Comments

Many components and assemblies have internal features that are difficult to inspect, none more so than additively manufactured (AM) parts. Conventional quality control requires samples to be sectioned and subsequently scrapped. However, the advent in the 1980s of X-ray computed tomography (CT) for industrial material analysis and nondestructive testing heralded a new era for inspection of such parts, both internally and externally. 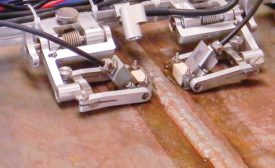 One of the most challenging jobs in nondestructive testing involves the inspection of pressure vessels for high-temperature hydrogen attack, or HTHA.
Dominic Giguere
One Comment

HTHA occurs in low-alloy carbon steels that are subjected to high pressure and high temperature, typically above 205°C (400°F). In this environment, hydrogen can dissociate and react with carbides in the steel to form methane.