What Thermal Processing is Involved in Smithing a Flask?

The beautiful powder flasks seen in this blog are the result of a dedication of time and talent and a labor of love. These are not historic artifacts from a bygone era, but artisans manufacture them using techniques similar to those utilized by craftsmen over 200 years ago.

Next to the rifle, the gunpowder horn was the American frontiersman’s most treasured possession. Typically made from a cow’s horn and fixed to a shoulder strap to fit securely against its owner’s side, the powder horn kept the soldier’s or hunter’s gunpowder dry and at the ready. The owner often personalized these horns by carving their name or the image of a deer into it. This would be done with their hunting knife while passing the time waiting for dinner to come by.

Elaborate flasks like Figure 1 would have been commissioned by European royalty and nobles to add flair and uniqueness to a utilitarian object. This one is made from sterling silver, walnut and velvet. It is actually a combination of two designs from centuries ago. 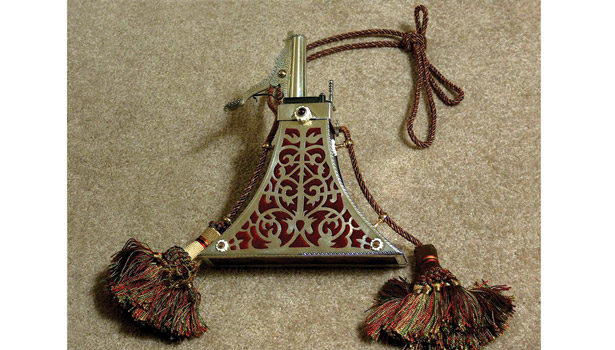 One of the pioneer-day techniques utilized in these reproductions is thermal processing. Thermal processing of a replica powder horn might include melting, casting, rolling, forming, annealing, soldering, hardening and tempering. The antique mill (Fig. 2) is actually utilized for some of this work.

To produce the French-style powder flask – called a musketeer – like Figure 1, sterling sheet stock is purchased from a refinery for the sides. Each of the separate parts is uniquely created by the master craftsman, including the spring for the closure mechanism. Springs of this type are fabricated from music wire. The wire is annealed, formed into the necessary shape, hardened and tempered. The hardening process utilizes a torch fueled by natural gas and oxygen. A minimum amount of oxygen is used to avoid over-oxidizing or decarburizing the part.

One of the key precious metals used in these designs is sterling silver, which is 92.5% silver with the balance being copper. As most of us know, silver tarnishes. For this reason, a modern sterling called Argentium is often utilized. The silver content remains the same, but some of the copper is replaced by the metalloid germanium. In addition to tarnish resistance, germanium also imparts precipitation-hardening properties and improves ductility. 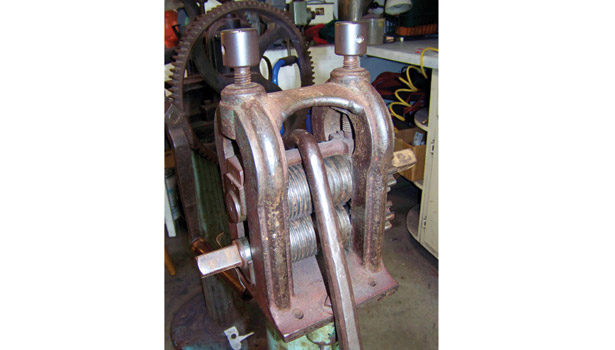 The chain seen in Figure 3 is made from sterling silver in a labor-intensive process. Scrap sterling was melted down and cast into a small ingot. This was rolled into a square “wire” using the antique mill shown. The wire was then annealed and re-rolled to the flatter shape seen here. Annealing is done by heating the metal to the uniform bright-orange color followed by a slower cool by setting it on a piece of firebrick. At this point in the process, the wire was about 6 feet long. It is then wound around a rod, which determines the ID of the chain links. The turns are separated into individual links by cutting along the length of the wire. These links are then assembled and soldered together followed by intricate designs being engraved on each link.

For those who might have ongoing interest in the art of hornsmithing, the Pennsylvania-based Honourable Company of Horners has 265 members throughout the U.S. and Canada and as far away as Germany. Founded in 1996, the organization allows first-time members to join as freemen and move up in ranks to journeyman or master by demonstrating their horn-making skills. 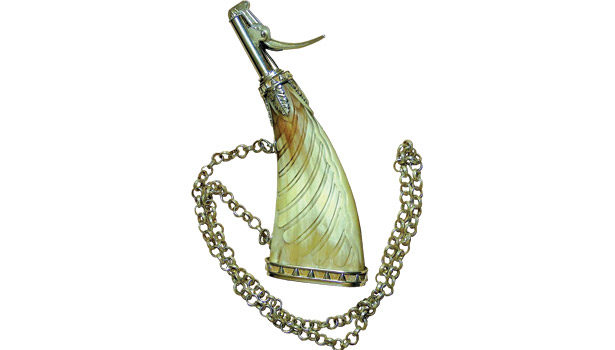