Shifts in measured hardness due to elevated temperature could lead to false acceptance or rejection of heat-treated parts.

Metals have long been employed for various purposes, thanks to the many different potential proper-ties that are made possible due to alloying and heat treating. In particular, steel is used in a wide range of applications because properties such as tensile strength, ductility and hardness can be adjusted to ideally suit the needs of many varied applications. Hardness, while not a primary attribute of steel, can be correlated to tensile strength and ductility, which means it can be used to determine its suitability and performance for a given application.

Heat treating is commonly used to bring the properties of steel into a desired range. However, the required process of heating and cooling in a controlled manner is time-consuming, especially for large items that tend to retain heat for long periods. Production schedules are often tight, leaving little time for necessary testing and possible re-work. Because of this, many heat treaters want to perform any required hardness testing before the item in production returns to the ambient temperature required by most hardness-testing standards. Furthermore, portable hardness testers are attractive because the part can be tested in situ, eliminating the time required to transport the part to a laboratory for testing (Fig. 1). 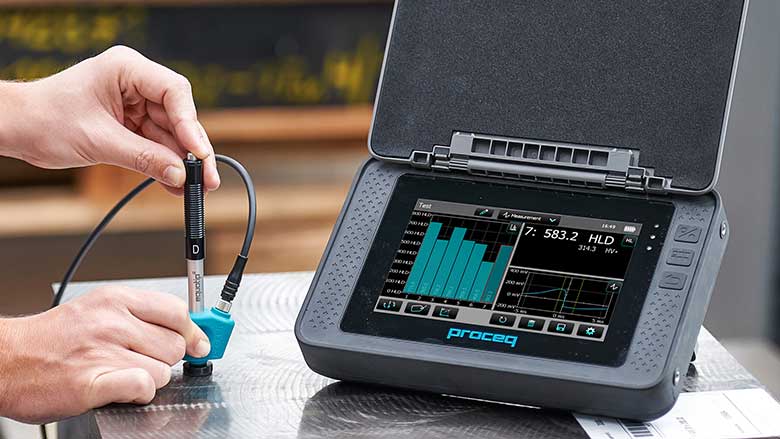 Fig. 1: Leeb hardness testing is being performed on large steel block prior to machining. (image courtesy of Screening Eagle Technologies)

Hardness testing is loosely defined as the ability of a material to resist deformation by a harder body, known as an indenter, which is generally diamond, ceramic or tungsten carbide in the most common hardness tests. During a hardness test, the indenter is pressed into or launched against the surface under test in a prescribed and controlled manner, which results in a plastic (permanent) deformation (indentation) of the surface that provides a measure of hardness. Hardness testing is therefore highly dependent on the interaction of the indenter with the metal surface. However, this interaction of indenter material with the metal surface changes with temperature due to changes in metal. 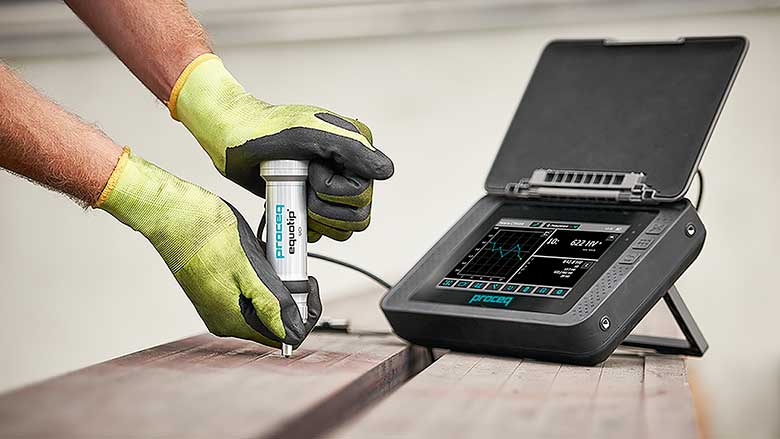 Fig. 2: A UCI hardness test is being performed on steel bars after heat treatment. (image courtesy of Screening Eagle Technologies.)

The Leeb test method is highly portable and very user-independent. The Leeb tester launches an impact body against the metal surface and measures the velocity of the impact body at a precise moment – just prior to and just after the impact. The tip of the impact body is either tungsten carbide, polycrystalline diamond or ceramic. The impact with the surface leaves an indentation, with the ratio of the rebound velocity to the impact velocity directly related to the size of the indentation. Thus, the ratio of velocities is the measure of hardness and the basis of the Leeb hardness scale. Leeb hardness results can be correlated to common benchtop test methods like Rockwell, Brinell and Vickers.

UCI uses a Vickers indenter mounted on the tip of a calibrated steel rod. This rod is then vibrated at an ultrasonic frequency that creates a resonant vibration of the rod, and this frequency is measured as the initial frequency. The diamond-tipped rod is then pressed into the surface until a specified test force is achieved, typically 1 kg, 5 kg or 10 kg (Fig. 2).

It was also decided to collect data for three different levels of hardness – soft, medium and hard – representing a range of hardness commonly used in industry. This choice was made because it was expected that data taken at different hardness levels might reveal a change in indenter-steel interaction due to the depth of the indentation manifesting as a change in the effects of elevated temperature on the measured hardness.

Both the Leeb and UCI test methods require a minimum mass and thickness, so commonly available Leeb test blocks of three different hardness levels conforming to the specifications of ASTM test method A956 and made from the same tool-steel alloy were chosen. The homogeneity of the steel and polished surface of the test blocks limited scatter in the data from those two important variables. Since hardness cannot be measured at the same spot twice, the minimum spacing between indentations was kept according to the requirements of the test methods. Following ASTM A956 (Leeb) and A1038 (UCI), a series of five indentations constituted a test, with the five indentations spread across the test surface.

The blocks were heated in a simple convection oven until they achieved a temperature of approximately 350°F (180°C). Each block was removed from the oven one at a time. Temperature and hard-ness were measured as the block cooled, and the block was returned to the oven for reheating once it reached ambient temperature. 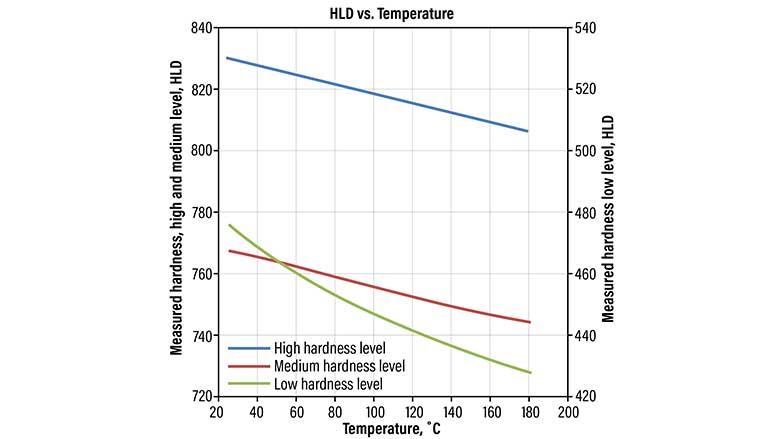 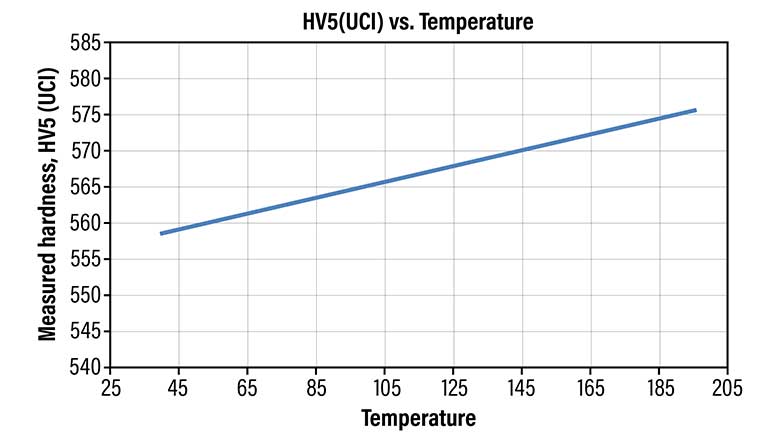 The Hardness Leeb D (HLD) data (Fig. 3) shows an inverse relationship between the measured hard-ness and temperature, with measured hardness decreasing with increased temperature. This is expected for this test method and roughly follows the decrease in Young’s modulus that occurs as steel temperatures increase.

The medium- and high-hardness-level blocks show a fairly linear inverse relationship between temperature and measured Leeb hardness, with similar slopes for both in the temperature range of this study. Both medium- and high-hardness levels also showed a similar difference between elevated temperature and ambient temperature, with an average shift of 21 HLD for the medium level and 24 HLD for the hard level. When correlated to the Rockwell C (HRC) scale, this represents an approximate de-crease of 2.5 HRC at 350°F (180°C) compared to hardness measured at ambient temperatures.

Perhaps the most interesting behavior is seen at the low-hardness level, where measured hardness already begins to rapidly change with increased temperature. While the hardness measurements on high- and medium-hardness levels stayed within tolerance until about 122°F (50°C), the low-hardness-level block was already measuring out of tolerance before reaching 104°F (40° C).

The results from the UCI test show a fairly linear increase in measured hardness with temperature (Fig. 4). This is the opposite of the Leeb results and, on the surface, is a bit counterintuitive since steel softens at elevated temperatures. However, the result is as expected when the science of the test method is understood.

The UCI test method depends on the interaction of the diamond tip with the surface under test. As steel is heated, its Young’s modulus decreases, which increases the contact compliance with the dia-mond indenter. Increased contact compliance results in less of a frequency shift, thereby resulting in an increase in hardness measured by the UCI method. It is important to note that the increase in measured hardness from 104°F to 374°F (40°C to 190°C) corresponds to an approximate increase of only 1 HRC.

The ASTM standard for UCI (A1038) does not specify a temperature range or require a correction for temperature. It only warns that the temperature of the test piece can influence the test results. The data presented in this article indicates that the ASTM A1038 standard could be improved with more restrictions or information about temperature.

The above results demonstrate a shift in measured hardness due to elevated temperature that could be enough to lead to false acceptance or rejection of heat-treated parts if they are tested while still at an elevated temperature. It is important to note that the data presented here is only valid for the steel alloy that was tested because of the complex relationship between the hardness test methods used and the unique combination of material properties that exist for each alloy. Any temperature depend-ence of hardness measurements should be confirmed by the user for each alloy, temperature range and test method of interest.

For more information: Tom Ott is technical solutions manager at Screening Eagle USA in Aliquippa, Pa. He can be reached at 800-839-7016 or tom.ott@screeningeagle.com, or visit www.screeningeagle.com.

All images provided by author except where noted.