These mixed reviews, recommendations and inconsistent outcomes have created skepticism among those who are considering DCT. The roots of inconsistency affect both conventional heat treating (CT) and DCT. The advantage using a short-cycle DCT followed by one temper (SDCT+T) to replace LDCT+T is proposed.

In 1999, the newly formed ASM subcommittee failed to acknowledge three research studies that used SDCT+T. “Role of Eta-Carbide Precipitation in the Wear Resistance Improvement of Fe-12Cr-Mo-V-1.4C Tool Steel by Cryogenic treatment”[1] was published by the Iron and Steel Institute of Japan in 1994. “Formation of Fine Eta Carbides in Special Cryogenic and Tempering Process Key to Improved Properties of Alloy Steels”[2] was published by Industrial Heating in 1997. Another study using very SDCT+T exhibited no signs of thermal shock or cracking. “Increasing Hardness through Cryogenics”[3] was published by Gear Technology in 1997.

Most of the committee membership advocated LDCT+T using a gases-nebulizing atmosphere or cold-box dry chamber. This committee was made up mostly LDCT+T equipment manufacturers and service providers. However, Nu-Bit Inc. – using the NBP Process[4], a patented process using an incremental step quench into a liquid-nitrogen bath until part reached liquid-nitrogen temperatures – recommended SDCT+T.  The committee ended up recommending LDCT+T and called for technical papers to support a long-cycle DCT.

Since 1999, researchers investigating LDCT+T for specific steels have collectively failed to establish LDCT as a standard practice during heat treating.[5,6]

Manufacturers using as-quenched 06 steel for making master gauges for the auto and aerospace industries used a -120°F cold-box freezer to extend the quench, increase hardness and stabilize the material. The Timken Company thought DCT might be helpful in the gauge-manufacturing process. The company’s old process had great results, extending the quench using a -120°F cold-box freezer.

This process historically has produced masters that have maintained size within five one-hundred-thousandths of an inch, 1/60th the width of a human hair, and angle taper within 3 seconds of a degree. The masters maintain stability for more than 30 years. If Timken were to implement a new process, it would have to match or exceed these results.

The group was getting mixed reviews in their research of cryogenics and cryogenic vendors. Ironically, it was a copy of a newsletter produced by the company’s communication team that explained how Nu-Bit’s NBP add-on process had increased the life of broaches phenomenally at Timken’s St. Clair plant in Eaton, Ohio.

With the help of the Timken Research’s Material Science Department, testing was conducted to determine the percentage of retained austenite. The company’s current process resulted in retained-austenite levels between 5.5% and 8.5%. The NBP-process tested results had retained-austenite levels between 4.0% and 4.5%. This demonstrated that the new cryogenic process was as good or better than the existing process.

Goddard Enterprises, a machine shop in Boulder, Colo., sometimes makes small, intricate parts using the wire-EDM process. Some of these parts have tolerances of ±0.0002 inch. One of the parts Goddard Enterprises makes is a 440 stainless steel (58-60 HRC) load comb for the computer disc-drive industry.

In the past, the company would do a triple draw during heat treatment to stabilize the material. This helped the warpage problem, but the hardness dropped below the desired results. Another way the company tried to compensate for part movement was to add several roughing cuts. This worked, but it was not a fast process and would increase the run time 30%. There was also more time required to program the added cuts.

After trying cryogenic treatment, the hardness was good, and Goddard Enterprises could go to a single rough-cut with three finish cuts. This simplified the whole process, and the scrap rate was reduced to almost zero. The cryogenic process used was the NBP process, SDCT during heat treatment.

LDCT has a very high propensity to delay the as-quenched condition of a part waiting for LDCT freezer availability. Most heat-treat operations that use batch or in-line hardening and tempering will find that LDCT will disrupt production throughput. Lengthy delays can result in the microstructure of the part losing austenite to lower bainite, which will decrease hardness as well as other properties. In addition, a lengthy delay may cause cracking of a highly stressed part from the prior quenching cycle.

A typical ASM Heat Treaters Guide recommends[9] that after quenching by any method, the as-quenched condition to handling temperature, around 150°F (65°C), should be tempered immediately, usually interpreted as within 5-15 minutes to lessen previous quenching stresses and minimize cracking. If delayed, steels should be held at 150°F (65°C) or be reheated using a snap temper and held at 275-300°F (135-150°C) until DCT.

However, this snap temper should be short-cycled if lengthening may convert austenite to lower bainite. There is a time duration mismatch when adding a short snap temper to LDCT. Researchers investigating LDCT fail to factor in the obvious possibility that LDCT can be a bottleneck processing step during heat treatment, whereas any time delay in further processing of the as-quenched condition could change hardness, strength, toughness and wear resistance in tool steels.

As-quenched part distortion, warpage or bowing are usually caused by part fixturing during austenitizing and quenching; not using press quenching; quench mediums; quench-medium temperatures; selected cooling-rate parameters; internal or surface stresses prior to austenitizing; or incorrect chemical analysis of a steel.  When these problems exist in the as-quenched condition, DCT may amplify or worsen these conditions.

A successful austenitizing and primary quench cycle is verified in the as-quenched condition. Process control is very important for any heat-treat process, including one using DCT. For this reason, most heat treaters attempt to verify heat-treating parameters, including hardness, for the purpose of assuring properties are met.

The lack of carbon infusion into austenite during high heat and austenite lost to pearlite or bainite during quenching will decrease hardness. Achieving the expected as-quenched hardness will increase consistency. Most heat treaters do not have in-house metallurgical capabilities or in-depth metallurgical know-how. However, heat treaters routinely measure and record as-quenched hardness. The heat-treat attendant will verify any standardization of DCT by measuring hardness before and after DCT and tempering.

As a function of time at temperature (aging) at liquid-nitrogen temperatures of -320°F, LDCT will precipitate a volume of fine η-carbides. After 36 hours or more, η-carbide grain size will coarsen η-carbides, which will affect property outcomes.[10] Many studies combine LDCT+T to measure % volumes of η-carbides or a steel’s property outcome.[5,6] It is hard to distinguish where η-carbide volumes fractions are formed.

There are no signs of thermal shock or cracking using SDCT+T after carburizing 9310. In carburized steels, such as 9310, the carbon level in the carburizing region becomes either equal to or higher than the carbon level in tool steels. This study used 4-inch-long bars in 1-inch-diameter samples and coupons machined from 0.40-inch-thick discs with teeth hobbed into them. The SDCT, NBP process used immersion for 15 minutes in liquid nitrogen. The transfer time from quench to deep freeze was less than 2 minutes. Samples were then tempered. Figure 1 shows maximum hardness resulted with improvement in temper resistance. Figure 2 shows a 50% increase in fatigue life and a 5% increase in load-bearing capacity. 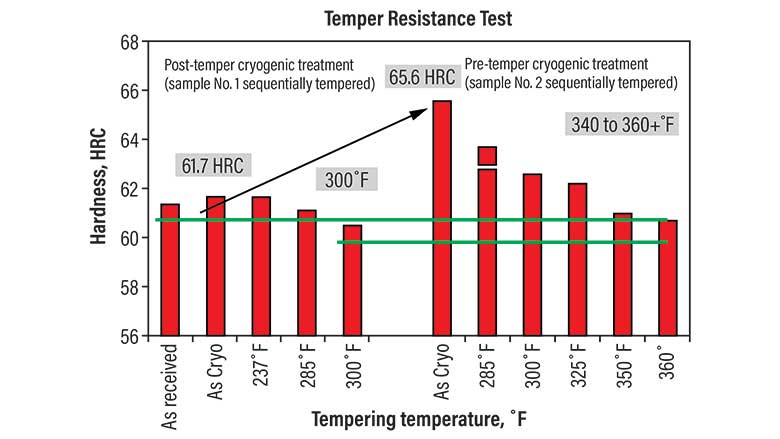 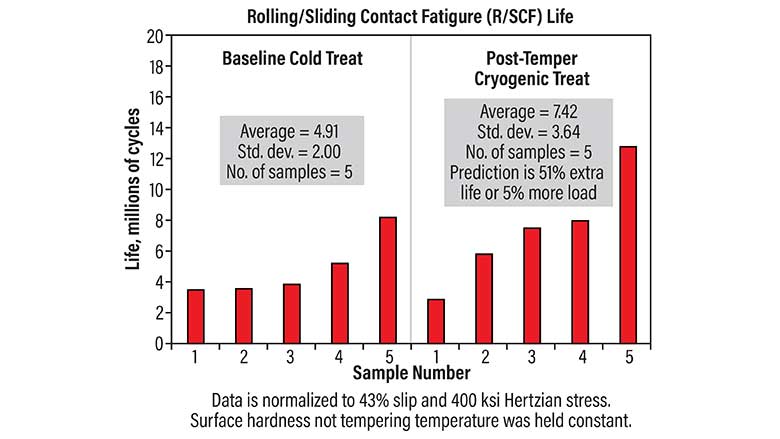 Role of Eta-Carbide Precipitation in the Wear Resistance Improvements of Fe-12Cr-Mo-V-1.4C Tool Steel[1]

The variation of the wear rate with sliding speed is shown in Fig. 4. The wear rate versus sliding distance is shown in Fig. 5. Unlike cold treatment, cryogenic treatment promotes preferential precipitation of fine η-carbides. Figure 6 shows the electron diffraction pattern taken from the tweed-like structure of cold treatment after tempering. Figure 7 shows the electron diffraction pattern from the martensite matrix and η-carbide after tempering. The mechanism that cryogenic treatment contributes to wear resistance is through the precipitation of fine η-carbide rather than the removal of the retained austenite. 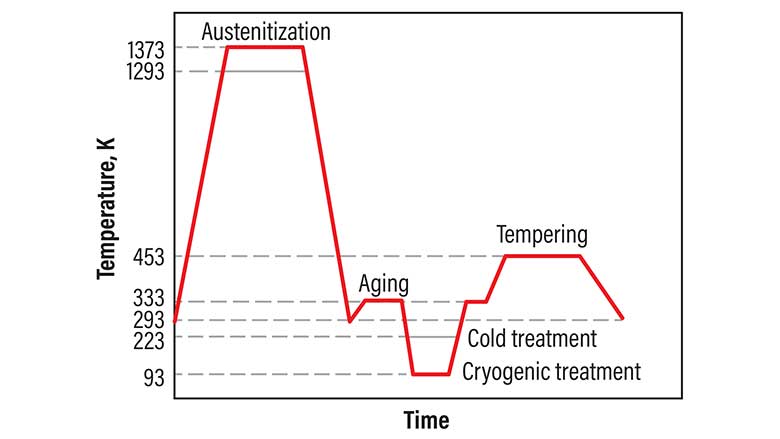 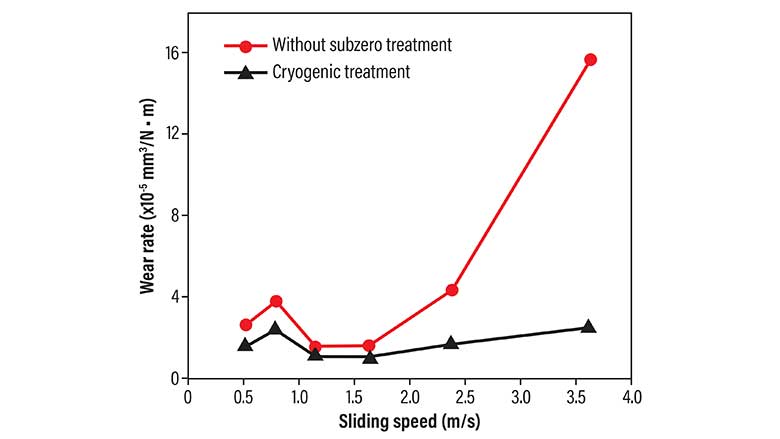 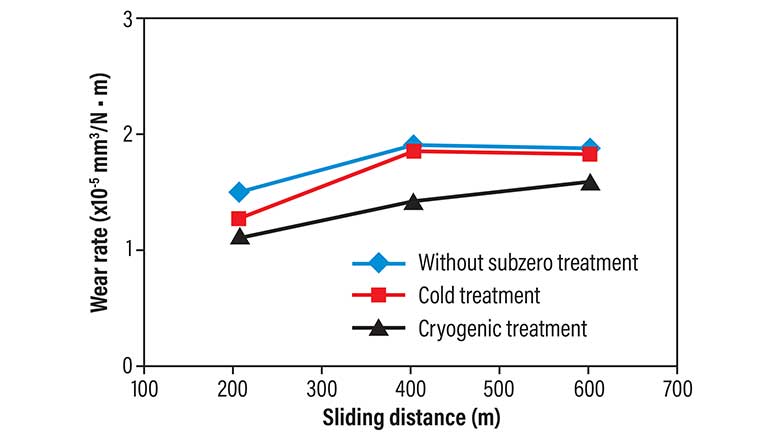 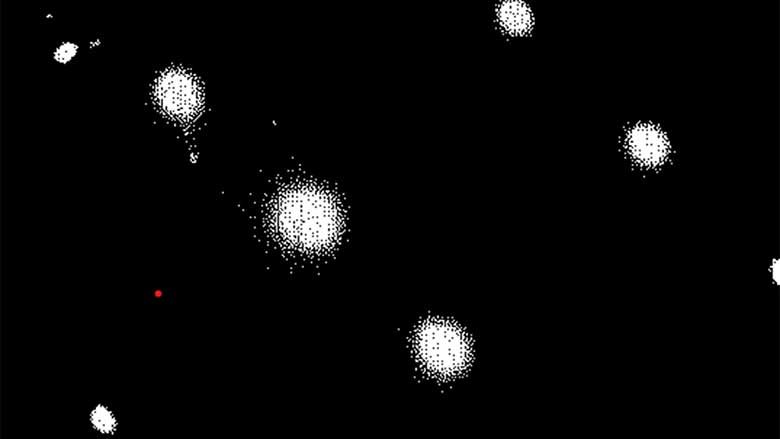 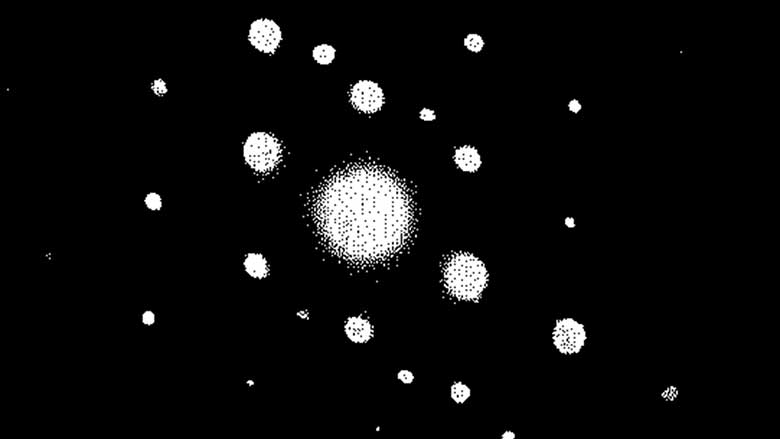 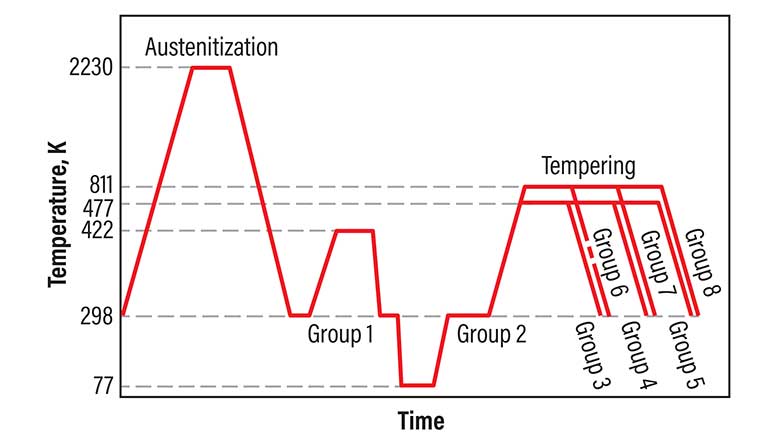 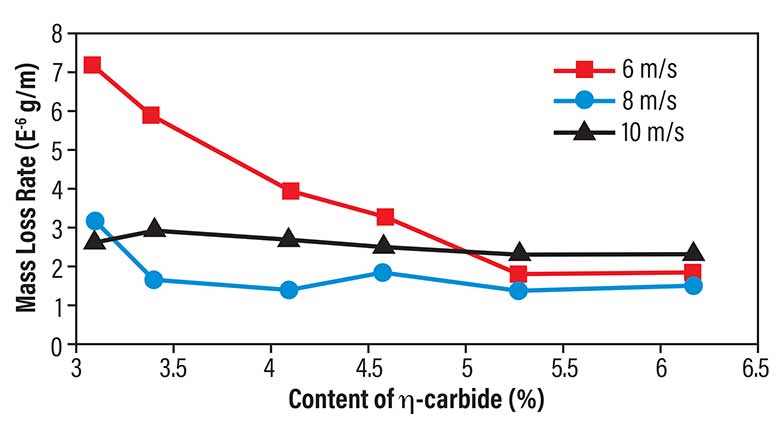 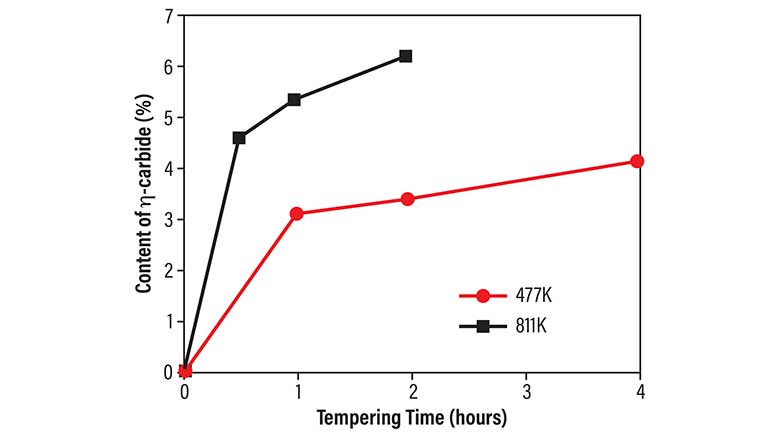 The cryogenic treatment used for T15 tool steel was SDCT+T. All specimens were austenitized at 1494K (2230°F) for 10 minutes, oil quenched and then held at 422K (300°F) for 30 minutes before any further treatment to eliminate all previous thermal effects on the material.

Figure 8 shows the heat-treatment cycle of experiments. Table 1 shows the thermal treatment of groups of specimens tested. Table 2 shows O-stage η-carbides are at as-quenched and at as-extended-quenched condition SDCT without tempering and % η-carbide precipitation after SDCT+T. During tempering after SDCT, the content of η-carbide increases with tempering time at both 477K (204°C or 400°F) and 811K (538°C or 1000°F). This indicates that η-carbides precipitate during the tempering process only and that the longer the tempering time, the more η-carbides precipitate. Figure 9 shows the mass loss rate versus the content of η-carbides in tempered groups. When η-carbide content reached 4.8% or higher, the mass loss rate was the lowest for all speed rates. 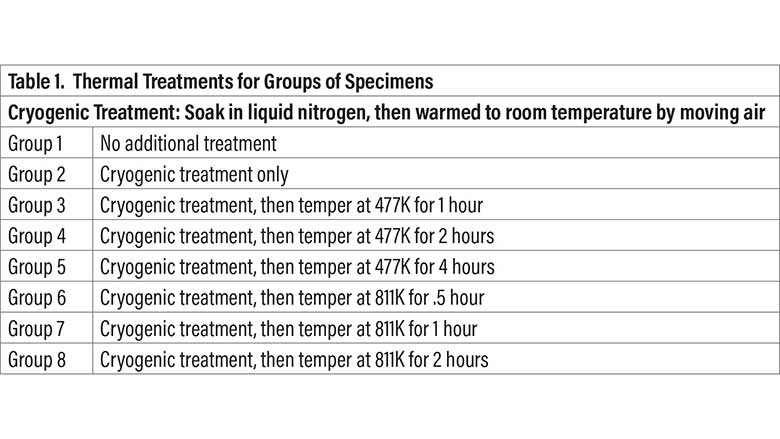 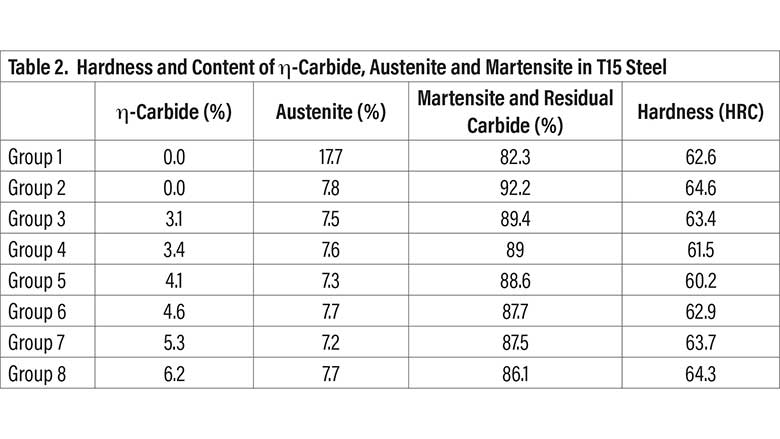 Standardization using DCT is achievable if:

Transformation of austenite to martensite is a temperature event. When using DCT, the martensitic lattice dramatically changes at deep-cryogenic temperatures, setting up η-carbide precipitation during aging.

Researchers investigating LDCT fail to factor in the obvious possibility that LDCT can be a bottleneck processing step during heat treatment. Any time delay in further processing of the as-quenched condition can change the final expected hardness, strength, toughness, wear resistance and other properties in tool steels.

Heat-treat attendants should verify any standardization of DCT by measuring hardness, including before and after DCT and tempering. Heat-treat attendants should not over-temper when using DCT. Typically, tempering guidelines have been set in ASM’s Heat Treaters Guide for a given steel. Following these guidelines can nullify any expected gains from DCT.

For more information: Dennis J. Kamody is currently a deep-cryogenic consultant. He was founder and president of Nu-Bit Inc. and has three patents on deep-cryogenic processing. He also has 10 years of experience with tool steels used in tool-and-die making as a maintenance manager and heat-treating manager. He can be reached at dkamody@comcast.net or 412-606-8780.

All graphics provided by the author.