Nickel-brazing is unique in the brazing world in that each of the nickel-based brazing filler metals (BFMs) available for use today depends on the use of temperature-lowering ingredients (i.e., temperature-depressants) such as boron, phosphorus and/or silicon to enable the BFM’s usefulness for joining stainless steels and many other superalloys for critical aerospace applications.

Unfortunately, boron, phosphorus and silicon act as “hardeners” in the nickel-chromium alloy structure and can reduce the ductility of a nickel-brazed joint to zero if that joint is not brazed properly. By properly I mean that the gap clearance of a nickel-brazed joint should be kept very small – 0.000-0.002 inch (0.00-0.05 mm) thickness or less – if truly ductile behavior in end-use service is desired.

Fig. 1 shows an award-winning photomicrograph of a nickel-brazed component that was published in the December 1967 issue of Metal Progress magazine, a publication of the American Society for Metals (the organization’s name has since been changed to the American Society for Materials). The photomicrograph shows the microstructure of a variable-clearance brazed joint between a free-machining 18-8 stainless steel component at the top of the photo and a Vanadium-Permendur component on the bottom.

The BFM used was the nickel-based AMS 4777 (also identified as AWS A5.8, Class BNi-2). It can be seen that the BFM fills three different gap-clearances: a large slot at the right side of the assembly, a wide joint gap in the center of the photo and a very thin joint at the far left of the photo.

Although there is a shrinkage-crack visible in the center of the BFM pool at the right side of the photo, the rest of the BFM material in the horizontal joint along the center of the photo is solid. It exhibits no cracks, voids or depressions. Instead, it shows a smoothly polished and etched centerline structure along the entire horizontal length of the joint. This centerline material is rich in zero-ductility chromium-borides. It is interesting to note that no such continuous centerline eutectic material is shown in the very thin vertical portion of the joint at the far left of the photo.

Unfortunately, as mentioned earlier, all of these temperature-lowering, eutectic-forming elements in nickel-based BFMs are also hardeners; that is, the phase structures resulting from solidification of these elements have virtually zero ductility. Thus, the last phases to solidify (in the center of the joint) will be hard and non-ductile. If the joint is thicker than only about 0.004 inch (0.10 mm), these hard centerline eutectics can actually form a continuous line down the center of the joint (as shown in Fig. 1) and cause the joint to become very prone to cracking under any kind of thermal or mechanical stress or strain in service. 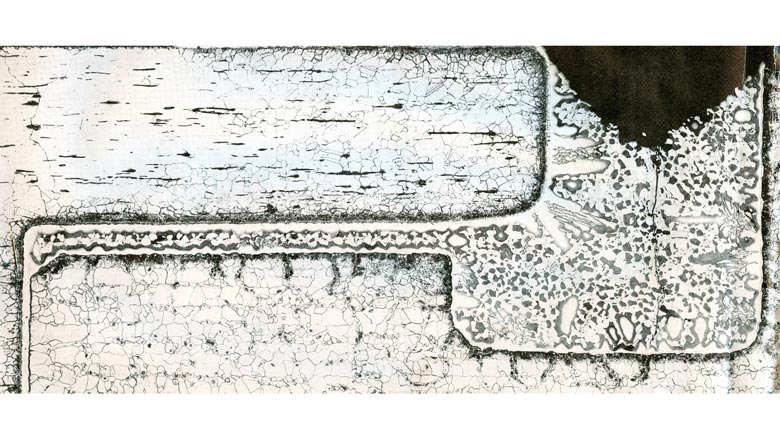 Look again at the thin, vertical portion of the joint shown on the far left side of the photo in Fig. 1.  Because that joint is very thin (less than 0.003 inch/0.075 mm), the amount of eutectic “hardener” that remains in that portion of the joint is minimal. Most of it will readily diffuse into the base metal on either side of that thin joint. The diffusion of the very small amount of BFM in that thin joint is such that there is physically not enough of that temperature-lowering additive remaining in that thin section to enable the formation of any kind of continuous centerline eutectic. Therefore, this thin joint can behave in a very ductile fashion in service.

It is very important for all users of nickel-based BFMs to realize that joints should be very thin in order to prevent the formation of continuous centerline eutectic structures. These structures will be very hard and prone to cracking in service due to high concentrations of boron, silicon or phosphorus. 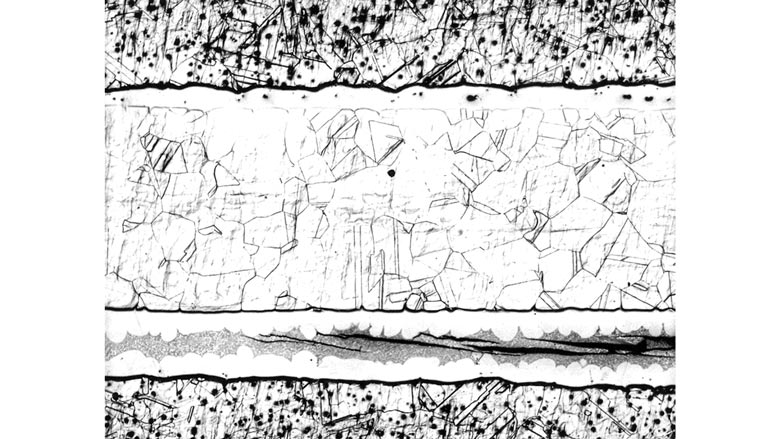 Fig. 2. Round pin brazed into hole. As typically happens, the pin will drift to one side in the hole, resulting in a tight joint on one side and a wide-gap joint on the other. In nickel-brazing, this can result in the formation of a continuous centerline eutectic in the wider section of the joint, as shown.

To further illustrate this concept, look at the photo in Fig. 2, which shows a polished cross section of a round-pin that was nickel-brazed into a larger-diameter round hole. Note how the solid-pin drifted to one side of the hole, causing the joint on the right side of the photo to be thin, with just a few spots of what is called a “non-continuous centerline eutectic.”

Those darks spots appearing in the joint on the right side of the photo are not voids. They are actually dark-etching centerline-eutectic phases surrounded by ductile nickel-chrome solid solution material. By contrast, the left side of the photo shows a wide joint that results in the formation of a continuous centerline eutectic structure, which cracked extensively in service as shown clearly in the joint on the left side of the photo. Fig. 3 shows a photo from a nickel-brazed component that actually failed in service because of a crack that progressed right through the center of the joint. The cross-section photo clearly illustrates the problem of centerline-eutectic cracking under thermal/mechanical shock in service when the joint clearance is large enough to cause the formation of a continuous, hard centerline structure down the center of the joint.

To control the formation of hard, continuous centerline eutectic phases when nickel-brazing, joint clearances should be kept to about 0.000-0.003 inch (0.00-0.08 mm) thick at brazing temperature. Joint thicknesses greater than this run a high risk of forming a continuous centerline eutectic structure, which will be highly prone to cracking in any form of robust service.

Dan Kay operates his own brazing consulting practice in Connecticut (since 1996) and has been involved in brazing for almost 45 years. He received his BS in Metallurgical Engineering from Rensselaer Polytechnic Institute and his MBA from Michigan State University. Dan has been writing brazing blogs for www.industrialheating.com for 13 years.

When should nickel plating be used?