There is a plethora of automotive news this month. Never before have I seen so much significant news coming out of the auto industry. We will do our best to parse it in this column and in the podcast.

Quite frankly, most of the news – the good, the bad and the ugly – is related to electric vehicles (EVs). According to calculators from the EPA, EV emissions are 25-60% of the comparable ICE-vehicle, which depends on where (how) power is generated. In Poland, an EV actually generates more carbon emissions than an ICE vehicle. In France, there is a 96% carbon savings.

Automakers are concerned that the rapid (possibly legislated) move to EVs is “beyond the limits” for them. They will either need to charge higher prices and sell fewer cars or accept a lower profit margin. Either option leads to cutbacks. The UAW has estimated that the shift to electrics could result in a loss of 35,000 union jobs. Additionally, the Motor & Equipment Manufacturers Association estimates that the U.S. auto-parts industry could lose as much as 30% of its workforce, which equates to nearly 300,000 jobs.

The automotive industry is globally investing $500 billion in new plants and technology. Scott Keogh, chief executive of Volkswagen Group of America, told The New York Times, “It’s one of the biggest industrial transformations probably in the history of capitalism. The investments are massive, and the mission is massive.”

Similarly, Andy Palmer, a former Nissan executive who helped launch the first mass-produced electric car said, “It’s like moving from the horse to the car. It’s that seismic.” Editorially, I ask you, what could possibly go wrong?

There is no doubt that portions of our industry (e.g., forging) will be negatively affected by a switch to EVs due to a drastic reduction in the number of parts needed. EVs use as few as 17 parts compared to hundreds in the typical ICE vehicle.

These are not reasons to stop the EV evolution, but these and other factors could justify slowing the transition. With so few EVs in the system right now, we really don’t understand the long-term impacts of a rapid switchover. Here are just a few.

One voice of reason is concerned about the recent electric push by the U.S. In early April, Senator Joe Manchin (D) of West Virginia said that he “will not sign up for an aggressive EV push (by this administration).” His objections were based on the fact that proposals have not addressed who will get the revenue from the electricity used to charge EVs with taxpayer-funded charging stations, and U.S. critical-mineral supply chains are underdeveloped. Manchin is quoted as saying, “I will not sign up (to transform) our energy and transportation system around EVs that have to be dependent on foreign supply chains.”

One foreign country taking control of the EV industry is China. Did you know that Tesla’s factory in China now produces more cars than its California plant? China makes some of the batteries that power these cars, and the minerals that power the batteries (e.g., lithium and cobalt) are largely mined and refined by Chinese companies. China controls 80% of the lithium-battery supply chain, including the metal refineries. You can learn more about China’s cobalt and nickel “monopolization” in the podcast.

Europe is developing their lithium-ion capabilities as well. The continent is expected to have 28 factories producing lithium-ion cells by the end of the decade. Production capacity is due to increase by 1440% from 2020 levels. Last June, an expert advised a U.S. Senate committee that China’s battery development is 16 times greater than the U.S. To address this, senators are currently trying to get lithium production pushed forward via the Defense Production Act. 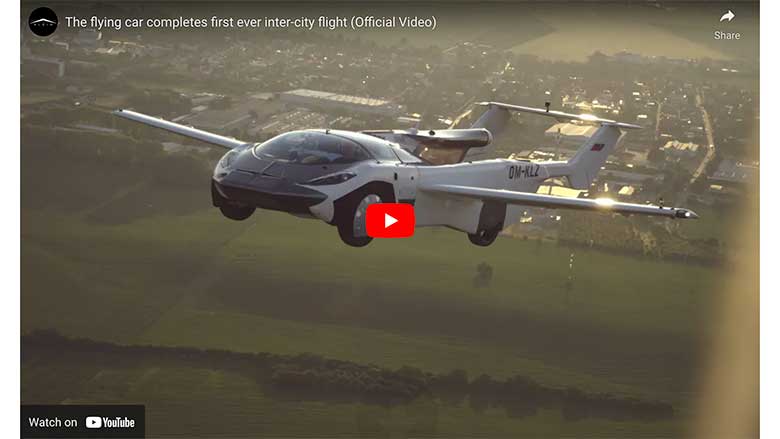 What does the future hold?

Here’s what is ahead for EVs.

With all of this EV development and investment, we expect that battery and autonomous technology will also see gains.

No discussion of automotive future is complete without mentioning the flying car. A Slovakian company, Klein Vision, has created the AirCar, which was awarded a Certificate of Airworthiness by the Slovak Transport Authority. This gives the AirCar official approval to fly around its home country.

The Iron Furnace: Seed of the Industrial Age

Automotive on a Roll