One of most important technical issues that a fracture analyst must deal with is evaluating whether the crack was ductile or brittle. Here we are talking about visible characteristics revealed to the human eye, and we are strictly discussing structures with features that are readily viewed with the human eye.

“Ductile versus brittle” is arguably the most essential characteristic of what is called mechanical behavior. That’s because even if the material is very strong, it may not get to act strong if it’s also brittle. A faster-than-anticipated load event or traces of corrosion may prevent the full strength from manifesting.

Charpy V-notch (CVN) testing is a popular way to evaluate toughness in steel products.[1] Toughness is a result of both strength and ductility. The CVN test allows us to make multiple measurements of different characteristics that allow us to tease out the contribution of the ductility to the apparent strength.

Figure 1 shows two sets of steel Charpy V-notch test coupons. The untested coupons are 10-mm square bars 50 mm long. A v-shaped notch is cut parallel to the small ends in the center of the length. We see the faces of the “v” notches on the outer edges of all of the broken fragments (marked VF).das 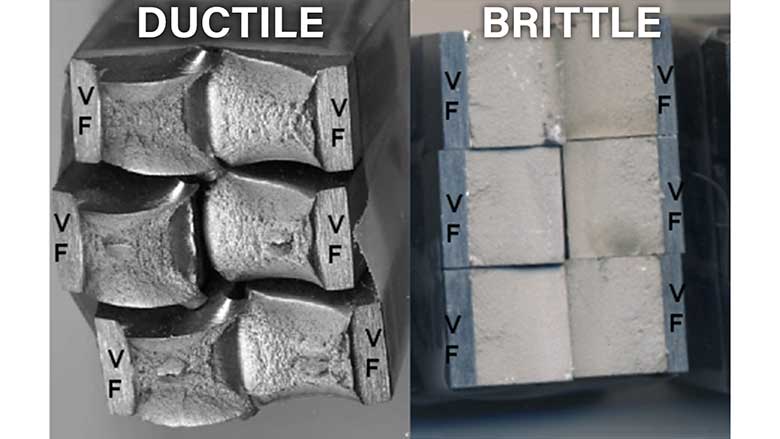 The bars were broken by hitting them with a freely swinging hammer on the surface opposite the notch. We can see that the ductile column has noticeable deviations from the nice 10-mm square bar described as the starting point for these tests. The brittle coupons have very smooth crack surfaces and very little evidence of deformation. They still appear nice and square.

When we complete the impact test, we read how much energy was absorbed by the deformation and fracture processes by noting how much lower the hammer swung back up after falling down to the position where it encounters and breaks the test coupon. The value is shown in foot-pounds or Joules.

But we’re not done! We also perform a measurement of the widest portion of the deformed bar. That allows us to calculate a lateral expansion percentage, which is one measure of ductility. Zero lateral expansion is as brittle as it gets.

Finally, the technician may examine the fracture surfaces to determine the “% shear.” Shear technically implies ductility at both macro and micro scales, although the test method does not require any-thing more than a visual check using the eyeballs. Shear is evaluated by the presence of shear lips. The shear lips on the brittle coupons are non-existent. The % shear would be zero. Those on the ductile coupons are very large. They take up around 35-60% of the fracture cross section.

Figure 2: The protruding (up) shear lips are matched by recessed (down) shear lips on the left of each pair of fracture surfaces. The far-right image is difficult to interpret. The second from the left actually has a shear lip that is half up and half down on the right side. The coupons tested at a warm temperature have about 25% shear, while those on the left have about 10%. 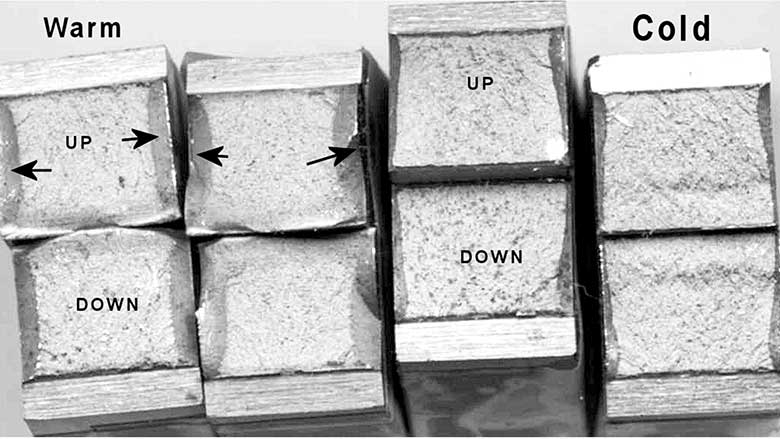 Figure 2 shows a set of coupons with an intermediate ductility value. Figure 2 highlights another im-portant feature of ductility. It’s facilitated by higher temperatures and impeded by low temperatures.

Charpy tests are one type of mechanical tests. Mechanical behavior overall is defined by the numerical outputs of this and other strength-measuring tests we subject any structural material to. Like the Charpy, the tensile test provides numerical values that characterize both the strength (pounds per square inch, or MPa) and the ductility (measured in % elongation or % reduction in area for cylindrical test bars). Tensile test results are easier to use in a design because the tensile strength in pounds per square inch, or MPa, directly helps engineers calculate the loads that the structure will be able to sup-port.

If something goes wrong (such as a loading spike) and if the specified structural steel had minimum Charpy requirements (assuming the material met the requirements), a bit of a safety factor is ensured. This was not the case, it was determined, for a very long series of castings made for the U.S. Navy. The metallurgist at the foundry decided that she knew better. When the test bars failed to meet the requirements, she lied and said that the castings met all requirements.[2] She is now facing prison time, and she and her employer will have to come up with a chunk of change to cover the fines associated with this criminal activity.

Understanding whether a broken part displayed ductile or brittle behavior is key to understanding the job of mechanical and civil engineers involved with design of structures. Materials that display ductile behavior surprise us with disaster less frequently than those that are inherently brittle.

All images provided by the author.

The Beauty and Mystery of Minerals (part 3)

Debbie Aliya is the owner and president of Aliya Analytical, Inc. in Grand Rapids, Mich., and specializes in failure analysis and prevention. She has a BS in Metallurgy and Materials Science from Carnegie Mellon University and an MS in Materials Science and Engineering from Northwestern University. She is also an IMT associate.

What is failure analysis? (part 2)

What is failure analysis? (part 1)

How is Failure Analysis Done?

What is a Thorough Component Failure Analysis? (Part 3)