Hard to believe that Major League Baseball’s (MLB) Spring Training is right around the corner. While MLB does not use aluminum bats, they came on the scene about 40 years ago. Much is proprietary about the material and its processing, but we will do our best to discuss it.

The documented history of the baseball bat goes back to a game played on June 19, 1846, in Hobo-ken, N.J. Trial and error found that a round bat worked best, as did those made from wagon-tongue wood. The first bat size restrictions were imposed in 1859. Bat length was restricted to 42 inches in 1869, and the diameter settled on 2.75 inches in 1895. Many other developments in wood bats occurred over the years leading up to the introduction of the aluminum bat.

Although Easton introduced aluminum bats in 1970, the NCAA did not sanction them until 1974. The basic difference between wood and aluminum is breakage and weight. Aluminum bats can be lighter than wood with weight-distribution technology allowing faster bat speed. Some sources say balls travel farther with aluminum, and some say wooden bats get greater distance.

The making of an aluminum bat begins with cut-to-length tubing shipped from the aluminum mill to the bat manufacturer. The wall thickness and the heat treatment affects the amount of elastic deformation the bat will experience during impact. Today’s high-performance bats typically range from 0.5-0.75 inch thick. While the common bat alloy (C405) chemistry has remained the same since its introduction over 20 years ago, the heat treatment has improved, resulting in a stronger bat.

Although the detailed processing is proprietary, the tubing is placed on a tapered mandrel and inserted through a die. This forms the wall of the bat to a taper. The metal is then annealed and moved on to the swaging process. Two opposing dies rotate around the bat at high speed, further shaping it and reducing its diameter to the proper size. The bat is then cleaned, heat treated and aged. The final high-temperature thermal process is the welding of the knobs on the grip end. The bats are finished by polishing, anodizing and silk screening.

Aluminum-bat development has centered on heat-treatment improvements and alloy additions. An addition of scandium – a rare, expensive and lightweight metal – has resulted in a strength improvement of about 10% over C405. This occurs as a result of the precipitation of Al3Sc, which also enhances weldability.

A discussion of aluminum bats would not be complete without mentioning the safety controversy. The concern is that balls come off an aluminum bat faster than a wooden one, which can injure a player, particularly a pitcher. It is interesting that many believe the aluminum bat is safer because wooden bats can break/splinter.

The marketing of aluminum bats themselves and its technological developments would lead anyone to conclude that hits off metal bats are harder and faster. Assuming aluminum bats continue to be used as in the past, maybe we can stop improving the alloying and heat treatment. It seems to already be good enough. 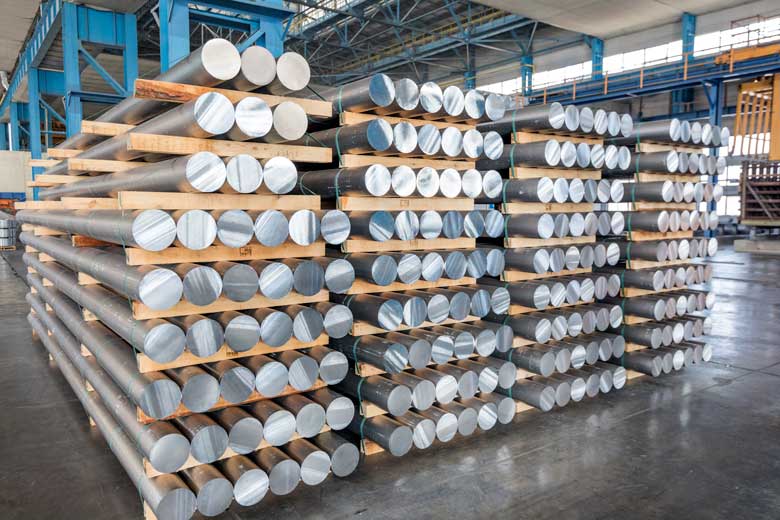 Owing to aluminum’s beauty and workability, Apple has used it in a variety of its products. Extrusion is an important manufacturing process for many of these products, and the extrusion process is the key thermal treatment for many of these alloys.

In this process, billets of aluminum are heated to temperatures ranging from 700-930°F. The material then goes through an extrusion press with pressures ranging from 100 to 15,000 tons. A soft alloy taking on a simple shape can be extruded at a rate of 180 feet/minute or more. Some aluminum alloys require further thermal treatment, but many used for extrusion are designed to be used as-extruded.

Something we take for granted today is the aluminum beverage can. Less than 60 years ago, the first two-piece, drawn-and-ironed can was produced. That same year (1963), Iron City beer in Pittsburgh was the first to utilize pull-top technology on 300,000 cans. Royal Crown Cola was the first soft-drink producer to utilize all-aluminum cans in 1964. By 1985, aluminum became the most popular beverage package, and the aluminum bottle can was introduced in 2000.

Nonferrous is Not Just Aluminum

There was a day, not that long ago, when the “woods” in your golf bag were actually made from wood – primarily persimmon and maple. As a hint to my age, I started golfing with a used set of clubs and real woods. At that time, your irons were mostly forged. Investment-cast irons and woods first came on the scene in the late 1960s and early 1970s but were slow to be accepted because casting technology was not well-developed. Technological developments have improved the ability to cast thin-wall clubs accurately and repeatably, resulting in 85% of all golf clubs now being cast.

The weight distribution of clubhead mass is crucial for ball trajectory. For this reason, forged-steel clubs are more difficult to hit because the weight cannot be distributed around the perimeter of the club. Forgings, therefore, are better for the advanced golfer because there is much less room for error.

Aluminum was used for early metal woods beginning in the 1970s. It is light and can be made to the maximum-allowable size for drivers. Early aluminum clubs scratched and dented easily, which gave aluminum a bad reputation that lingers today, even though the materials and thermal processing have improved over the decades. 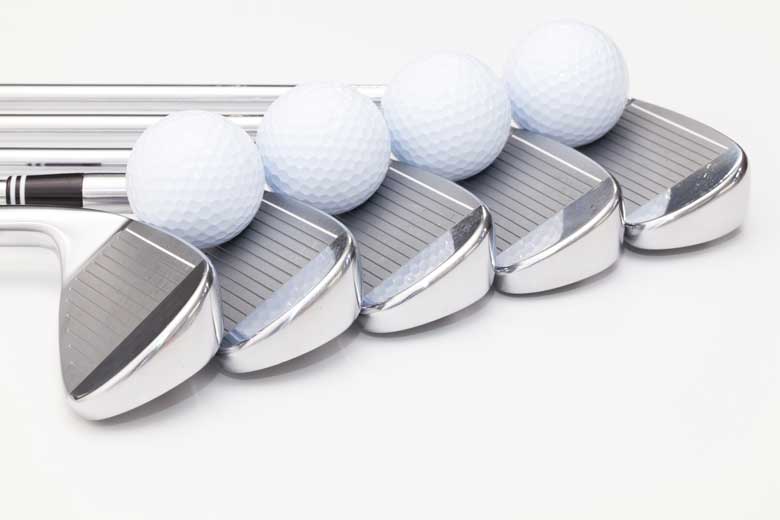 The aerospace industry provided the technology necessary for titanium to be used for driver heads. The first titanium clubs were made in the early 1990s, and the strength-to-weight ratio makes titanium a logical material choice for a driver. This means that a club made of titanium has the strength of one made from steel but weighs half as much. This allows the size of the club to increase while maintaining the weight. This larger head gives golfers more confidence in striking the sweet spot.

The most common alloy used for an all-titanium club is 6/4 titanium, which is 90% titanium, 6% aluminum and 4% vanadium. A heat treatment keeps these alloys elastic. If a higher grade of titanium (be-ta) is used, it is normally for the face-only and not the entire club. Since titanium is more elastic and stronger than steel, the USGA believes that – for the very-high club speeds of pro-level players – a thin titanium club face increases the trampoline effect of the ball springing off the club face.

Titanium is not normally used for fairway woods because the club would need to be too large. The majority of these woods are cast from 17-4 stainless. In some cases, a 17-4 stainless club body is used with a face of beta titanium.

Investment casting is one of the high-temperature thermal processes involved in making golf clubs. Because of the criticality of clubhead weight distribution, designers and their casting suppliers must pay close attention to the club’s center of gravity, thickness tolerance and weight.

The investment-casting process begins with a prototyped and tested design. Production-quantity molds are then built and tooled. Similar to what we have discussed previously for jewelry-making, the lost-wax process is used to create the ceramic molds for investment casting.

The empty ceramic shells are then preheated to about 2000°F (1093°C) to prep them for the liquid stainless steel at 2500°F (1370°C). After pouring and solidification, the brittle ceramic shell is removed from the metal casting. Final removal of clinging material is performed via sandblasting.

Another thermal process playing an important part in club design is heat treatment. Material selection is vital as well, and the heat treatment used depends on the material chosen. Higher-end clubs use more exotic alloys in order to develop an optimum combination of properties. As mentioned, stainless steels such as 17-4 and 431 are commonly used. These alloys are also hardened and have higher hardness than other steel club materials. The higher hardness transmits the maximum energy from the club to the ball, making the ball fly farther.

Nonferrous materials are practically ubiquitous even though many applications have been developed in less than a lifetime. No doubt more material and thermal-processing developments are in our future. We are certainly seeing this in additive manufacturing on a regular basis.