There are a number of very important steps that must be followed in order to ensure good brazing, one of which is that the parts to be joined must be clean before being assembled for brazing.

Unfortunately, too many brazing shops overlook this important criterion. Instead, they depend on the brazing furnace to burn off any lubricants or to dissociate any oxides present on the parts, thus saving time (in their opinion). Their reasoning seems to be: “Oh, don’t worry about that. The furnace will clean up the parts.” Or they think: “Don’t worry about that. Just put more flux on the parts.” The latter is said if they are torch brazing or induction brazing out in air. 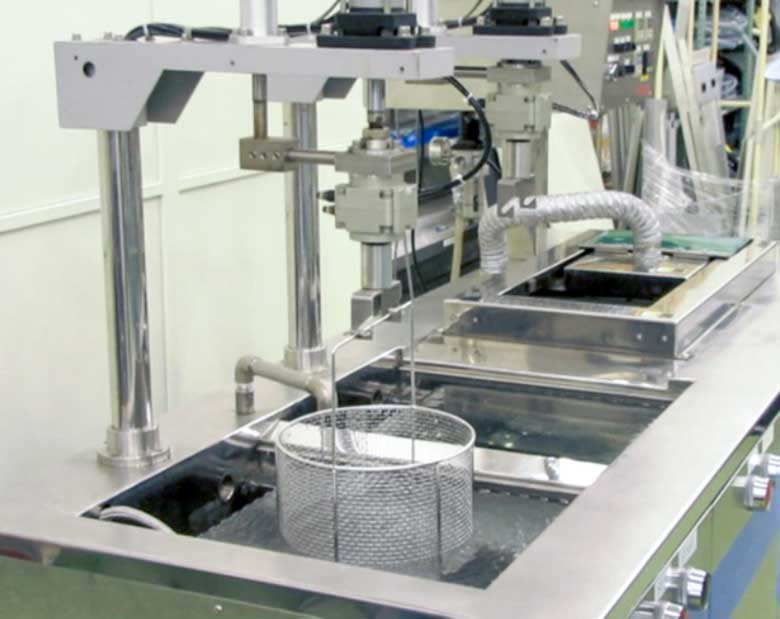 Fig. 2.   Ultrasonic cleaning tanks can be small tabletop units or large tanks sitting on a shop floor (pictured). Always get a heavy-duty type of unit, if possible, rather than a cheaper model since it will effectively last longer and pay for itself.

Both statements are incorrect, and the actions can result in poorly brazed assemblies that either leak in service or do not have sufficient braze-strength to handle the service conditions to which they are going to be subjected.

When a part fails to meet service requirements, the brazing personnel are surprised and often can’t understand why the parts failed since the outside surfaces of the parts came out of their brazing fur-nace looking shiny, clean, and bright. Based on the nice-looking outside surfaces of the parts, should they not assume that the inside of the brazed joints were also similarly cleaned and therefore probably brazed well? Unfortunately, no!

The inside surfaces of a brazed joint are called the “faying surfaces” and are usually assembled with very little gap clearance between them – typically in the range of 0.001-0.005 inch (0.025-0.125 mm). Such a clearance should be very good for capillary flow of the molten brazing filler metal (BFM) into that gap between those faying surfaces if they are clean.

However, such gap clearances are actually far too tight to allow any gaseous atmosphere (or vacuum dissociation process or brazing flux) to get into that very thin gap to clean those surfaces – i.e., to ef-fectively be able to react with, and dissociate, any lubricants or oxides inside the joint and remove them from the joint in order to allow those inner faying surfaces to be clean enough to allow the molten BFM to be drawn into the joint by capillary action. Such cleaning of pre-assembled, dirty parts is virtu-ally impossible.

That is why I use the expression “cleanliness is next to godliness” when I talk or teach about brazing preparation. The faying surfaces must be cleaned thoroughly prior to being assembled for brazing.

The BFM will not bond to or flow over oils, dirt, grease, lubricants or oxides. If any of these contami-nants are present on the faying surfaces during a brazing process, the molten BFM will not respond properly and braze failures will be common.

Match your degreasing solution to the type of lubricant you are trying to remove!

It is important for any brazing shop to check the cleanliness of parts coming to them for brazing, irrespective of whether those parts were shipped to them from an outside supplier or from another part of their own shop. Table 1 shows the items that need to be checked so that your brazing shop knows what contaminants they are dealing with and what has to be removed from the surfaces prior to brazing.

Table 1.  Preparation of Surfaces for Brazing


Parts must be cleaned to remove the following:


Proper Cleaning is a Two-Step Process

These two steps of proper cleaning are degreasing (removing oils, fingerprints, lubricants, etc. from each surface to be brazed) and removing surface oxides that are on the metal surfaces underneath those surfaces oils. Let’s look in more detail at each of these two factors.

As shown in Table 2, the removal of any oils and lubricants depends on the types of oils/lubricants you are dealing with. Namely, are they petroleum/mineral-oil based, or are they aqueous (water) based.  Degreasing fluids are not necessarily going to be effective at removing all types of oils and lubricants. It is very likely that you will need to use a different type of degreasing solution to match the type of oil/lubricant that you are trying to remove. One-size-fits-all does not work when cleaning parts prior to brazing.

I have visited many brazing shops that have experienced greater-than-normal rejects from their braz-ing furnaces or their torch/induction brazing operations. In many cases, their cleaning processes prior to brazing were not good or were being improperly used. 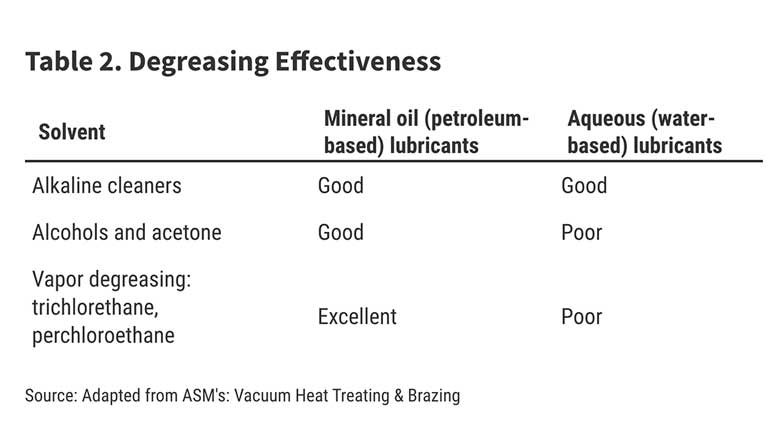 For example, it was discovered that shop personnel had been using alcohols and acetones for many years to remove standard lubricants from the surfaces to be brazed (which worked fine). However, they did not realize that their pre-braze cleaning procedures were no longer effective when their sup-plier switched over to using only water-based (aqueous) lubricants. The alcohols and acetones used were no longer effective at removing oils/lubricants from the surfaces to be brazed (as shown in Table 2), resulting in increased braze failures in their shop. The same was true for other shops that had been using vapor-degreasing processes when the lubricants had been switched to water-based products.

Beware of synthetic, silicone-based lubricants. These lubricants, if allowed to dry on the surface of parts, can render them nonbrazeable. Silicones are not a good actor in brazing, and they must be kept away from your brazing areas. A number of shops have found that they need to either burn off or machine off any of the hardened silicone-based lubricants from the faying surfaces of parts they received from a supplier since attempts to braze those surfaces did not work even after normal de-greasing processes were tried. They did not realize the difficulty that silicone-based lubricants presented.

There is a big difference between silicon and silicone. Silicon is a naturally occurring chemical element (Si) in the Earth’s crust and is a widely used in many metals, including in the manufacture of many aluminum-based and nickel-based BFMs. Silicone, on the other hand, is a man-made synthetic polymer commonly found in many rubberized products used in our homes, as well as in many lubricants.

As was mentioned earlier, the removal of any oxides from surfaces that are to be brazed is essential since molten BFMs will not bond to oxidized surfaces. Surface oxides can come from many sources, and they must be completely removed from all brazing surfaces prior to being assembled together for brazing. Many metals easily react with oxygen at room temperature to form surface oxides. Iron, steel, aluminum and titanium alloys are common examples.

Perhaps the oxides have been added to the surface via surface prep, such as grinding, grit blasting, etc. Aluminum-oxide is a common material used for grinding wheels or grit blasting, and residues from those processes will remain on the surfaces, potentially ruining any hopes for effective brazing. Tum-ble-deburring, likewise, leaves a surface film from the tumbling media that is used.

As shown in the last line of Table 2, the water that you use in your cleaning operations is very im-portant.  I strongly recommend that you use deionized water in your shop and not well water or city water. City water can go bad on occasion, whereas having your own water deionizer in your shop is an excellent safety measure. Well water may be great for drinking, but it contains minerals (calcium oxide, magnesium oxides, etc.) that are strong braze-inhibitors.

The equipment you use can be simple or formidable, depending on your budget. Cleaning can be done in a simple bowl on your workbench; in a larger, floor-mounted aqueous cleaner (Fig. 1); or perhaps via ultrasonic cleaning methods, such as that shown in Fig. 2. Ultrasonic cleaning baths are probably the most effective means available today for removing surface contaminants. The liquid in the ultra-sonic tank should be a degreasing fluid compatible with the type of oil/lubricant you are trying to re-move.

Proper cleaning of components to be brazed is essential prior to their being assembled together for brazing. Once the parts are assembled for brazing, any contaminants still trapped between the faying surfaces of the joint cannot be effectively removed. This will then prevent successful brazing, resulting in increased re-work, scrap, rejects, failed parts, delays in shipment, increased costs and even a bad reputation in the brazing industry for your shop.

Dan Kay operates his own brazing consulting practice in Connecticut (since 1996) and has been in-volved in brazing for almost 45 years. He received his BS in Metallurgical Engineering from Rensselaer Polytechnic Institute and his MBA from Michigan State University. Dan has been contributing brazing blogs for industrialheating.com for 13 years.

What is the real purpose of a braze fillet? (part 3)

What is the real purpose of a braze fillet? (part 2)

Is a strong vacuum good enough to ensure good brazing?

Is Refrigeration of Brazing Paste Needed?