Automation within forges and heat-treating facilities often consists of individually controlled processes for individual pieces of equipment, such as furnace heating or press operation cycles. Individual processes can be controlled at a Level I protocol. Full cell automation consolidates these automated steps and implements a central Level II control system, which is designed using a combination of Windows services and model-view-controller (MVC) architecture.

Automation has been present in the gas-fired heat-treat and forge marketplace for many years. The current state of automation within these markets commonly consists of individually controlled processes, such as furnace heating cycles, material movement, press operation and quench cycles.

A full cell automation approach, which consolidates all of these automated steps into a closed-off cell, is uncommon in the domestic marketplace today. The future state of heat-treat and forge automation is trending toward connecting the individual processes within a single closed-off work cell and implementing an end-to-end process-control system.

There are many advantages to full cell automation, such as safety, productivity and quality. With all moving equipment fenced in, most of the safety hazards could be contained away from human interaction. Productivity and quality are also maximized since heating times, door-opening times, quench times and movement times are consistent. The automated system can track individual parts as they make their way around the process, allowing for quicker part failure detection and troubleshooting of the issue, while automated data collection and production reports provide information that suppliers can present to their customers.

Prior to full cell automation, it is worth discussing the different items that make up a typical cell. These are called Level I devices. Furnaces, manipulators, robots and quench tanks will all have programmable logic controllers (PLCs) that run the device. These will be programmed to control the device, but they generally do not have knowledge or awareness of the other devices in the cell. The interaction between them is usually manually driven through human interaction.

Full cell automation requires the implementation of a central Level II control system, which is designed for full cell automation using a combination of Windows services and model-view-controller (MVC) architecture. This provides the best blend of technologies that enables immediate communications between industrial equipment such as PLC-controlled furnaces, manipulators, motors and turntables, as well as conveyance systems. In addition, the same architecture includes a robust web interface that provides user feedback and monitoring of these very systems. The back end is composed of a Structured Query Language (SQL) database that stores all process data in addition to system options.

Coordination of all Level I devices is managed through the Level II scheduling engine. The process kicks off when Level II receives product recipes. Recipes are parsed and scheduled based on system rules dictating furnace types and process-flow strategies, where the recipes themselves include information such as furnace temperatures, time to temperature and number of cycles. Level II works to optimize the various recipes and Level I devices to maximize equipment utilization and product throughput.

The importance of process data cannot be overstated, with customers requesting temperature and time data along with equipment service history for each product processed. Maintaining traceability is vital. Level II supports real-time data collection, data storage and data management to fulfill this requirement.

Level II capabilities also include options to communicate with the manufacturing execution system (MES)/corporate systems to close the loop between process and business operations. Fives DyAG in Farmington Hills, Mich., is a controls integrator with a team of developers capable of writing fully customized code in a multitude of programming languages and PLCs, making them very well suited to create solutions for this market.

Closed cell automation can be applied using almost any type of furnace. The most commonly used furnaces in fully automated cells are rotary furnaces, box-style furnaces or tip-up furnaces. Rotary furnaces are primarily used in FIFO-type operations where a more continuous type of operation is required. Box-style or tip-up furnaces can be used in cases where more optimization or customized loads would be required. There are no set rules for each cell but rather generalizations made through observations of domestic forge and heat-treat shops. A typical box forge supplied by Fives North American Combustion and North American Construction Services is shown in Figure 1. 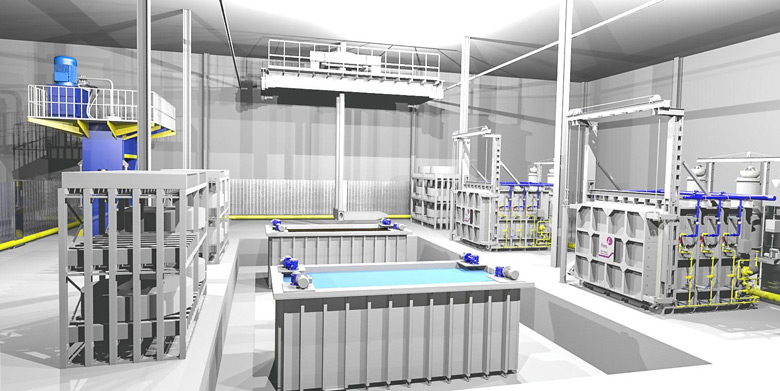 Two examples of automated gas-fired forge and heat-treat cells are presented. The first (Fig. 3) is a FIFO-type operation with rotary furnaces, a forging press, stationary robots and ancillary equipment on the downstream side, including piece inspection and piece marking. In the cell pictured in Figure 3, pieces are presented using an incoming roller conveyor. From there, they are picked up by a singular charging robot and put in one of two rotary furnaces. After a full rotation in the furnace and the piece is heated, the same robot discharges and places the piece in the press for the forming operation. A die-lubrication robot and a discharge robot complete the automated movements. A Level II control system in this cell would control all movement, furnaces and the press, and it would record all data for a part history report.

Another example includes box-style furnaces, quench tanks, an overhead-style manipulator and incoming conveyors that present the parts to the cell. In the examples shown in Figures 4 and 5, the parts are presented and placed in storage. The Level II system will develop a schedule based on operating parameters to that specified load. Based on the parameters, Level II would control the furnaces and their temperature, quench-tank temperatures and transfer time from furnace to quench tank. After all operations are finished, the manipulator would place the pieces back on the transfer car to exit the cell.

There are many other automation opportunities that exist in a forge and heat-treat facility not discussed here, such as part inspection, part marking and quenching within a cell. Other opportunities, including upstream and downstream operations such as intermediate and final finishing machines, exist outside the cell. These are all able to be scheduled and optimized by a larger control system.