December always seems (to me) to be a great month to reflect on the beauty around us and that of the season. Many beautiful things are thermally processed, so let’s slow down and take a look.

When we think of creating beauty, jewelry is one of the first things we may consider. Although technology has improved over the years, jewelry making borrows techniques from ancient days. 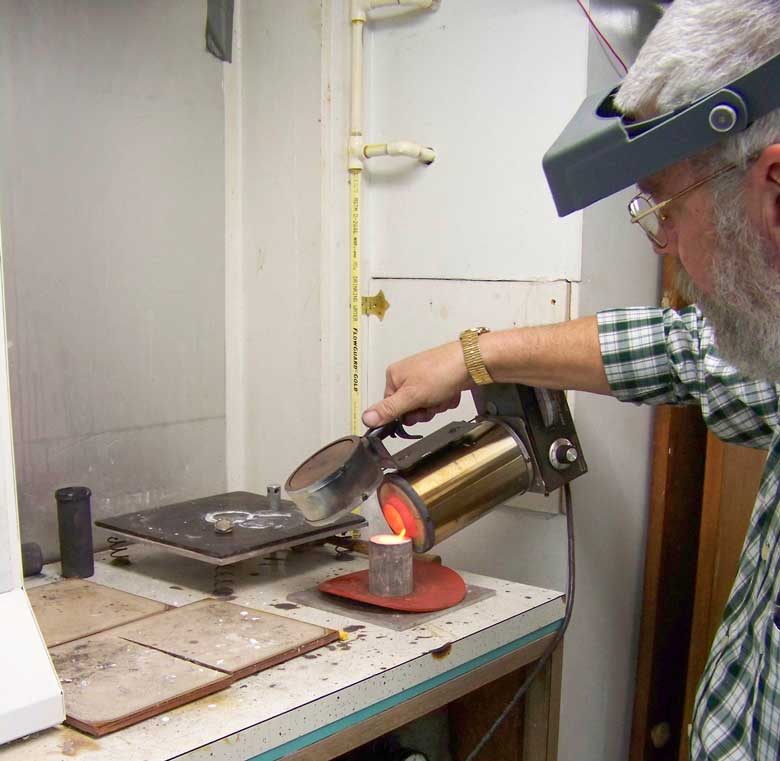 Liquid gold being poured into mold

While jewelry can be (and is) made from a variety of metals, gold continues to be the primary choice today as it was in Egypt as far back as 3000 B.C. As then, this is because gold is rare, doesn’t tarnish and is malleable. That means that gold can be worked fairly easily. The word jewelry – jewelry in American English – is derived from the word jewel. This is the anglicized version from the Old French “joule.” Original word origins appear to be the Latin word “jocale,” meaning plaything.

The techniques for creating jewelry can sound more like a day at the steel mill – forging, casting, soldering, welding, rolling, trimming and carving. The first image shows the casting technique of a jewelry maker who was casting a ring and five feather pins from yellow gold. The second photo shows the cast product still attached to the button (ingot).

The gold raw material is either purchased from refineries or from individuals interested in cashing out some unused jewelry. As with many metal processes and unlike some others, jewelry material is infinitely recyclable. The purity of 14K gold is 58.5%, and 18K is 75% pure. Yellow gold is alloyed with some amounts of copper, zinc, nickel and silver. White gold is alloyed with nickel and silver and tends to be a little harder than yellow gold thanks to the higher nickel content.

The process of creating a mass-produced piece of jewelry begins with the creation of a design. The design is then carved into wax exactly as the final piece will look. The wax part is cast into plaster material to make a mold of the part. The plaster mold is “baked out” in a high-temperature oven at 1200-1400°F to volatilize the wax. For good reason, this has long been known as the “lost-wax” process. Toward the end of this process, the metal – 14K yellow gold, in this case – is melted in a separate carbon crucible. The melting point for 14K gold is about 1650°F, and it will be poured at 1750-1800°F. The carbon is self-fluxing, resulting in the purest final product possible.

When the gold is fully melted, the plaster mold is removed from the oven and placed over a vacuum source. The gold is poured into the mold, and the vacuum draws it into the finely sculpted mold detail remaining from the lost wax. The plaster mold is removed, and the metal piece is appropriately pre-pared. It is then used to create another mold in a silicon-rubber product. This mold will be used to create as many wax pieces as are needed for the production run, which will be used for additional castings.

The casting photo shows that one ring was cast along with five quill-feather pins. For each quill, a wax part was made. Several of these were put together in the plaster mold to optimize the pour. Note the as-cast detail visible in the feather. The gold button at the bottom, which was the top of the mold, will simply be recycled into another cast. 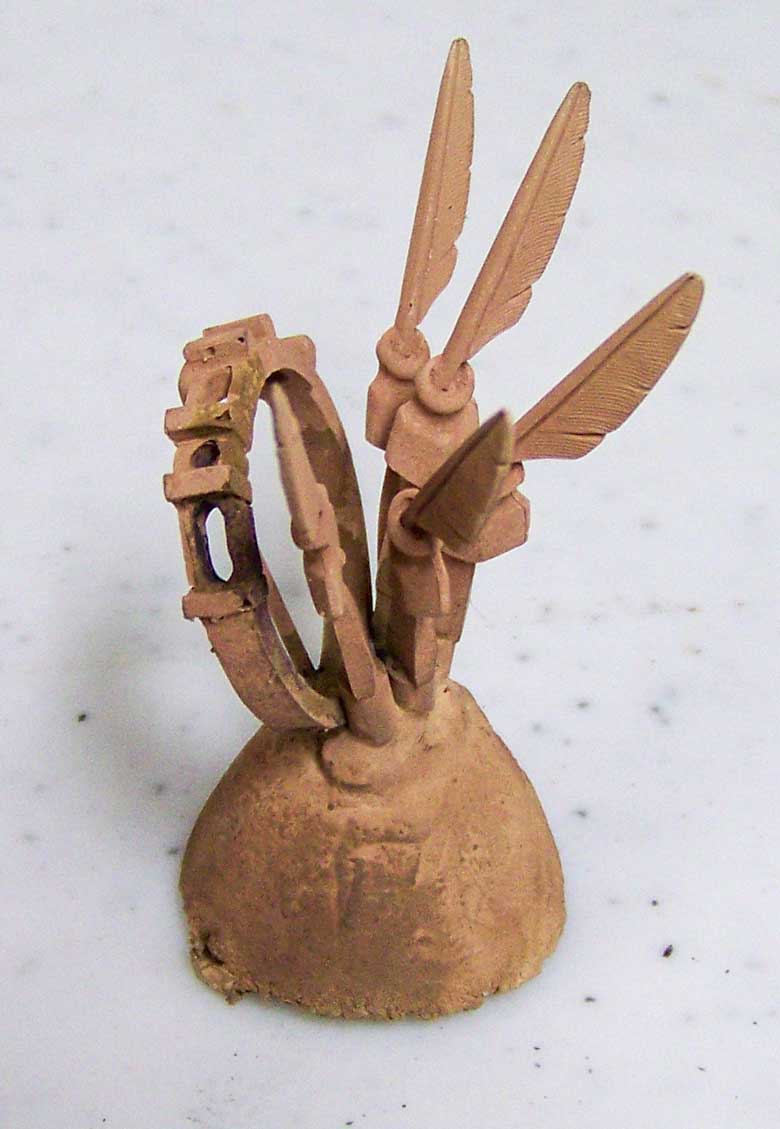 Now that the cast is complete, the individual pieces will be cut from the “ingot.” Due to the fine detail of the cast material, very little work needs to be done to clean up the casting. Usually, just a buff or a light tumble is sufficient to remove the casting remnants. For pieces like the ring, gemstones will be added by first grinding a seat into the metal, inserting the stone and roll forming the gold to lock the gem into place.

If asked which instrument most people would like to be able to play, their answer will likely be the pi-ano. Whether they know it or not, this is because the piano has the broadest range of any instrument. Because of this range, music for all other instruments can be composed on a piano. Also the most technically complicated musical instrument, the piano has over 2,500 parts.

Several of those parts require thermal processing to make them or to make them better. We will look at a few of these, including the cast iron plate and the strings.

Piano building began in America in 1775. The process of continuous improvement proceeded throughout the 18th and 19th centuries. One of these improvements was the cast-iron plate for structural strength and cross-stringing of the bass strings over the trebles. John Hawkins, of Philadelphia, was the first to use an iron frame in 1800. He was also a leading developer of the upright piano. By 1870, the “over-strung scale” method was perfected by Steinway & Sons, allowing the strings to cross close to the center of the soundboard, where the best sound is produced.

Quality control of the cast-iron plate is very important. The character of the sand used in the casting process is modified with binders such as clays and coal dust to produce the ideal composition. Metallurgists check the chemical analysis of the iron and monitor the critical temperatures of the process – 2750°F for molten iron. Vacuum casting is now being used to produce cast-iron plates with smooth finishes requiring no grinding.

Strings are another piano component that require precision manufacturing and the use of thermal processing. Specialized mills produce the wire from tempered high-carbon steel in diameters as small as 0.006 inch to 0.192 inch. Up to 17 different diameters of wire may be used for the 220 to 240 strings on a single piano.

String lengths and diameters increase from treble to bass. Different-length strings of the same diameter can produce different pitches. To attain the slower vibrations needed for the bass notes, strings are wound with other wire, typically copper in today’s pianos. The lowest string is about a ¼ inch in diameter due to the heavier core wire and its winding. Without the winding, bass strings would need to be 30 feet long to produce the necessary sound. Consider that this tough, high-tensile, polished wire is placed under high tension, subjected to repeated blows and bending, and stretched and slackened during tuning … and it is expected to last for decades in service.

Although the traditional piano is manufactured much as it has been for a century, current and future improvements promise to be the result of perfecting the sound via developments in the quality of the cast-iron plate and the string technology, likely involving thermal processing. 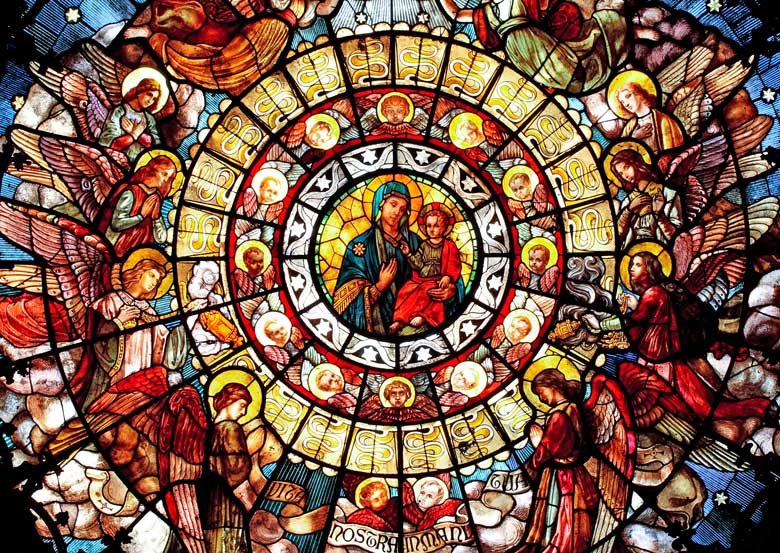 Stained glass has an impressive history. Some things come and go with time, but the appeal of stained glass remains. Many craftsmen dedicate their labors to restoring old stained-glass windows so that generations to come can enjoy their beauty.

One of the oldest-known examples of a stained-glass window, dating to 686 A.D., was unearthed at St. Paul’s monastery in Jarrow, England. The 12th and 13th centuries were known as the Golden Age of Stained Glass.

Thanks to Louis Comfort Tiffany and John La Farge in the late 19th century, stained-glass “art” is still enjoyed today. Due in part to Tiffany’s influence, only 10% of stained glass is used in churches. The rest is used in residential and industrial architecture as well as ornamental applications.

Did you know that the color of the glass is a result of adding metals or metal oxides to the raw materials? Copper oxide can produce ruby, blue or green colors in glass under different conditions. Cobalt is usually added to produce most shades of blue. Iron oxide and chromium are added to produce green shades. “Flashed glass” is made by dipping a ball of molten white glass into a bath of colored glass, which results in a less-intense color. 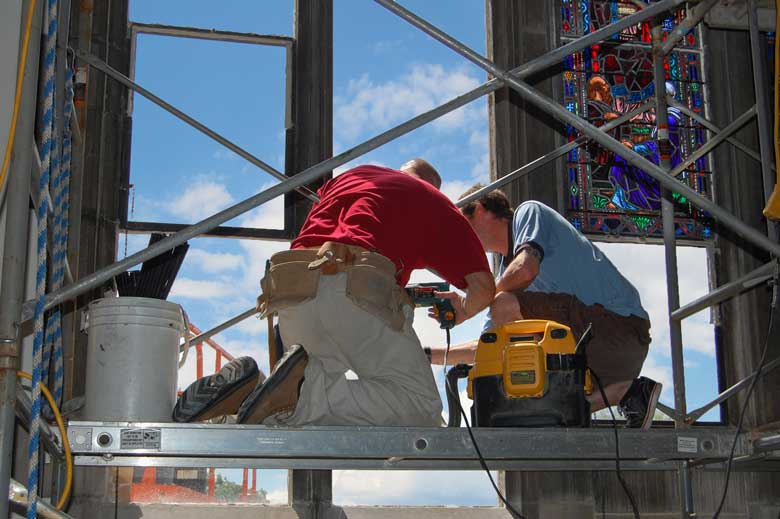 Large manufacturers of stained glass mix the raw materials – including fluxes and stabilizing agents – and heat the mix at 2500°F (1370°C). For cathedral glass, the molten material is ladled into a machine that rolls the glass into 1/8-inch-thick sheets. These sheets are cooled in a furnace called an annealing lehr. A typical factory will produce eight to 10 different color runs each day.

A stained-glass window is made by first creating the design, which incorporates the lead as a visual effect. A traditional narrative window has panels that tell a story. Others are simply created by use of a replicated design. Once the fine details are created, the pieces are assembled into H-sectioned lead cames. A strip of narrow lead is fitted around the exposed edges. The joints are then all soldered together, and the window is waterproofed by forcing a soft oily cement, or mastic, between the glass and the cames. This also keeps the small glass panes from rattling. The process for making an entire stained-glass window can take two to three months.

The structure, pieces and parts complicate the maintenance of large stained-glass windows. The need for restoration companies has grown in Europe as well as the U.S. The window you see in these pho-tos was thoroughly restored in 2008. Originally built in the early 1930s, time, gravity and the elements had taken their toll on this beautiful window gracing Harbison Chapel on the campus of Grove City College in western Pennsylvania.