As we ease back into the increasingly unfriendly skies, Google has launched a tool to help us all – a flight search engine that tells us the emissions per passenger for that trip. My personal share for an October direct flight to speak in Charleston, S.C., from Washington, D.C. was 133 kg of CO2. To make us feel better, Google told me that the plane I took on American Airlines emitted 21% fewer kg CO2 than typical for that route.

Google is catching up to a reality the airlines and their aircraft and parts manufacturers are coming to realize: Just as governments target passenger vehicle emissions, they are increasingly focused on the aviation industry.

The Biden administration recently touted an agreement with the largest U.S. carriers and announced Executive Actions intended to reach a 20% reduction in aviation emissions by 2030. They also announced a broader goal of zero-carbon emissions for the aviation sector by 2050. Longer-term, the Biden administration is looking to electric- and hydrogen-powered aviation for local and regional travel, but it is calling for the deployment of sustainable aviation fuels for today’s long-distance flights.

The White House Fact Sheet accompanying their announcement stated, “Today, aviation (including all nonmilitary flights within and departing from the U.S.) represents 11% of U.S. transportation-related emissions.”

The major passenger and cargo airlines operating in the U.S. each pledged to the White House they would take steps to reduce their own emissions and develop new technologies. While much of the near-term actions focus on fuel consumption, as with the passenger and heavy-duty vehicle industries, government regulations quickly move to components and, as is already the case here, aircraft engines.

In January 2021, the Trump administration’s EPA finalized a rule establishing new requirements for commercial aircraft and large business airplanes. The rule sought to align the U.S. with international aviation standards, a move that the California Air Resources Board says will do little to address the issue because most U.S. carriers already meet those levels.

Some states and advocacy groups believe the Biden administration is not going far enough and want to see binding requirements and not just “aspirational goals.” In October, California, Illinois, Massachusetts, Minnesota and Oregon sent a letter to the White House and EPA calling on the agency to move forward with legally binding standards to cut greenhouse gas and co-pollutant emissions for in-service aircraft engines and more-stringent rules for engines entering service beginning in 2030. 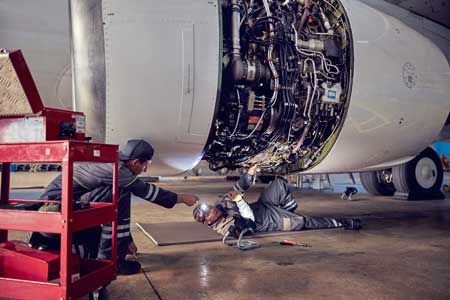 In addition to the states, 100 environmental and community groups called on the Biden administration to set strong standards for the aviation industry and avoid the focus on bio- and alternative fuels.

The Biden administration is currently taking a small-carrot and light-stick approach with industry, moving more in partnership rather than dictating stricter standards. The 787 Dreamliner has 2.3 million parts per airplane with 1,006 of Boeing’s aircraft being built as of August 2021. Those 2.31 billion total parts come from manufacturers in the U.S. and around the world using equipment to produce components that may contribute to increased emissions.

However, manufacturers of machines and parts that can help reduce emissions for aviation engines and the overall aircraft will have a leg up over their competitors as OEMs and Tier 1 suppliers meet government requirements. Over time, the federal government will expand its reach and tighten standards covering the aircraft and its core and principal parts. The concept of lightweighting often focuses on the automotive industry, with particular attention in recent years on pickup trucks, but the aviation industry is increasingly being discussed.

Regulators are also beginning to contemplate how to set new rules for future modes of transportation in an environmentally friendly but economically sustainable manner. Advanced air mobility (AAM) is an airborne vertical-lift technology designed to transport passengers and goods to underserved, remote areas and shorter distances. Expected to grow to $115 billion by 2035 and create 280,000 jobs, AAM is only one of the advancements governments will regulate that could provide opportunities for manufacturers and heat treaters.

While manufacturers innovate and create the technologies of the future, Washington, D.C. today is pressing forward. In addition to President Biden’s announcement to reduce aviation emissions by 20%, the EPA is slated in November 2021 to release a proposed rule it will finalize in September 2022 on particulate-matter emissions standards from commercial aircraft engines.

Few would question that the commercial passenger aviation industry is among the hardest hit during the pandemic, even as the defense aerospace sector helped many aviation suppliers remain above water. The overall long-term outlook remains strong, however, and one has to look no further than the recent attention it is receiving from government officials in Washington, D.C.

So, when you book your next flight and happen to see an emissions calculator, do not be surprised because it may become as required as calories on a box.