Minerals: Their Beauty and Mystery

When we are making use of a metallic object, we are not necessarily thinking about how the metal was extracted from its ore. Even if we do remember that the atoms that make up the metal object in question were once likely combined with oxygen or sulfur in a brittle (if not also hard) material, we might not take time to reflect on the beauty of the mineral forms. Yet taking the time to appreciate the natural world is beneficial to us as both simple humans and as people who work in a technology-influenced environment.

Looking closely at an object and noticing its features and details is a good way to increase our creative powers. Following up on our curiosity is a good way to build a solid foundation of knowledge. Studying natural objects in this way is an excellent entrance to the world of scientific facts.

My vacation to the Keweenaw Peninsula (pronounced Key-wi-naw) of Upper Michigan gave me a chance to reconnect to my early interest in geology, rocks and minerals (Fig. 1). Commonly known as pyrite, the individual crystals are large enough to show off their rectangular and triangular facets. The rectangular facets result from the near cubic crystal structure of pyrite. When a corner of the cube is “missing,” we get triangular facets. Careful inspection will reveal trapezoids and other odd shapes resulting from missing edges.

This beautiful crystal has some “colonies” of different types of smaller crystals attached. Note the whitish translucent crystals, which might be quartz. They are not regular or large enough to see if they have the classical hexagonal column structure associated with quartz. I did perform chemical analysis of the black crystals, and I found them to be made of manganese and sulfur. It’s interesting that even though manganese and iron are right next to each other in the periodic table of the elements (numbers 25 and 26), their sulfides look so different. This is true despite the fact that the opaque gold pyrite and the glassy-appearing black hauerite have two sulfur atoms for each metal atom. 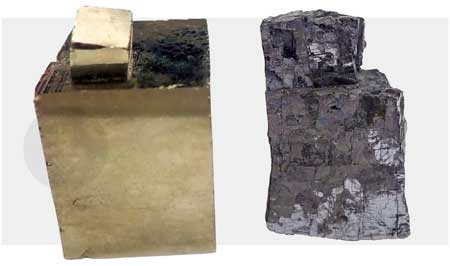 Fig. 2.  Pyrite (FeS2) at left and galena (PbS) at right. Why do the galena and pyrite resemble each other more closely than either resembles the hauerite?

Now compare a different crystal of pyrite from a mine in Spain that has produced beautiful, regular, nearly perfect cubic crystals with a chunk of galena that I recently purchased. Galena is lead sulfide, and although the pyrite (otherwise known as Fool’s Gold), has a yellowish tint and the galena more of a silvery or gray color, the luster and general appearance of the two materials are similar. Lead is atomic number 82 and is not even in the same series of elements as iron. In addition, galena is PbS, meaning it only has one sulfur atom per atom of lead! Mysteries like this are a good way to keep the flame of our curiosity burning (Fig. 2).

Fig. 3.  Large copper crystal with “dendritic” structure. This “tree structure” grew as copper atoms attached themselves to the growing crystal from an aqueous solution. This specimen can be found at the A.E. Seaman Mineral Museum in Houghton, Mich.

Figure 3 shows a spectacular specimen of pure copper metal from the A.E. Seaman Mineral Museum in Houghton, Mich. The copper grew directly in a pattern that reveals evidence of the cubic crystal structure in a different way. Nucleating crystals of copper, precipitating from copper-rich water solutions, attached themselves to the earlier-formed crystals at angles defined by copper’s face-centered-cubic structure. 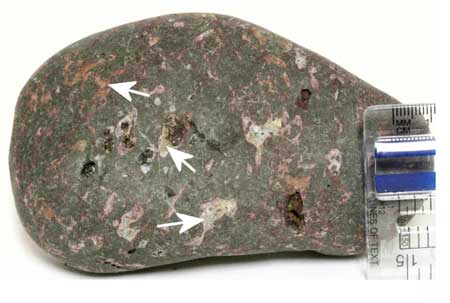 Fig. 4.  Amygdaloidal basalt, which usually has a black matrix

The museum, in addition to its wonderful and extensive displays of minerals, also has exhibits that educate visitors about the history of the copper mining industry in Michigan. It turns out that this metallic copper, most of which was extracted during the “Copper Rush,” was a key factor in the electrification of America at the end of the 19th century. Michigan copper allowed electrification of the 1893 Columbian Exposition (Chicago World’s Fair).

The indigenous inhabitants of what is now called Northern Michigan used the metallic copper they found at or near the earth’s surface for at least 6,000 years[1] to make tools and ornaments. There was no need for what we today call mining, with its implications of underground digging, explosives and other modern technological innovations. 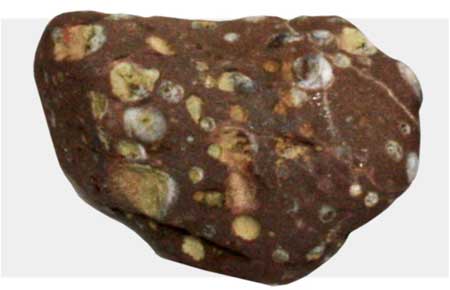 Fig. 5.  This red stone has green, pink and white inclusions like the one shown in Figure 4.

Michigan’s native metallic copper comes in many shapes and sizes, from pebbles to large boulders. There was a large crystal of copper at the museum entrance that did not have a cubic form. I was re-ally confused until I ran across the exhibit on pseudomorphs, which explained that a mineral can fill in a void in a rock that used to be occupied by a different mineral but has since dissolved away. Then its shape will replicate that of the original substance.

In addition to the museum, we visited several beaches along Lake Superior and Portage Lake. Figure 4 shows a large pebble that I found at a beach, which has a dark matrix with pink, white and green inclusions. These “amygdaloidal basalts” are volcanic rocks that contain gases when they start out as molten lava. They solidify as a foam. Over time, other minerals can fill in the holes. Basalt can some-times oxidize, which can change the color to reds or browns. The smaller pebble shown in Figure 5 may be an oxidized amygdaloidal basalt.

Debbie Aliya is the owner and president of Aliya Analytical, Inc. in Grand Rapids, Mich., and specializes in failure analysis and prevention. She has a BS in Metallurgy and Materials Science from Carnegie Mellon University and an MS in Materials Science and Engineering from Northwestern University. She is also a member of ASM and SAE.

When the Europeans arrived, the Native Americans started trading for iron and steel implements, rather than continuing to make their own out of copper.

Brittle Behavior: Is it Bad? (part 2)

Brittle Behavior: Is it Bad? (part 1)

Debbie Aliya is the owner and president of Aliya Analytical, Inc. in Grand Rapids, Mich., and specializes in failure analysis and prevention. She has a BS in Metallurgy and Materials Science from Carnegie Mellon University and an MS in Materials Science and Engineering from Northwestern University. She is also an IMT associate.

The Beauty and Mystery of Minerals (part 1)

The Beauty and Mystery of Minerals (part 2)

The Beauty and Mystery of Minerals (part 3)

Failure Analysis: How to Recognize a Fatigue Crack