Low-pressure carburizing (LPC) has been largely used to heat treat low-alloy steels for mechanical components, especially for the automotive industry, for over two decades. 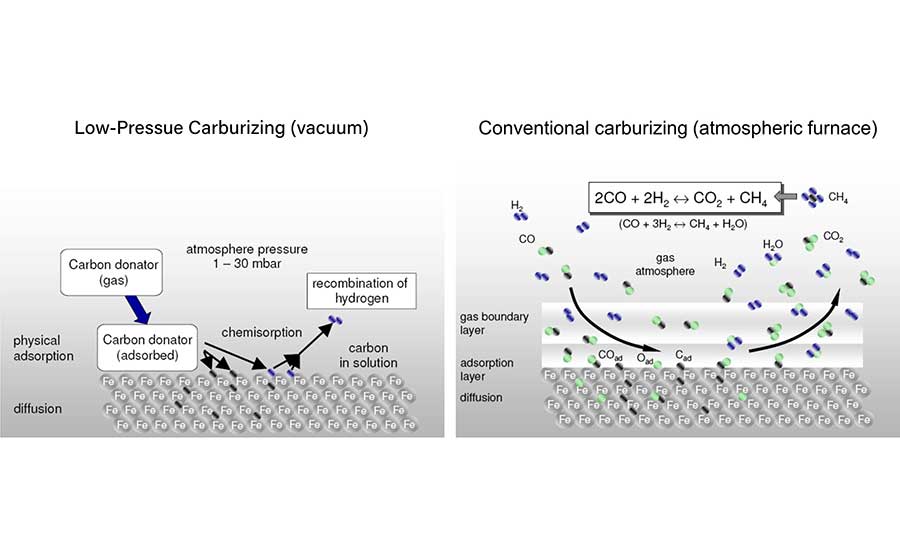 Fig. 1.  Schematic of LPC in a low-pressure furnace and traditional atmospheric carburizing processes.

In traditional atmospheric carburizing processes, hydrocarbon gases are typically mixed with air or nitrogen at a specific rate. This mixture of gases is called endogas, and it is composed of carbon mon-oxide (CO), hydrogen (H2) and carbon dioxide (CO2). If air is part of the endogas composition, then some water vapor is also present in the furnace atmosphere. Carbon dioxide and water vapor are potential oxidizing agents, causing the undesired IGO on the surface of the parts.[2]

Different from traditional atmospheric carburizing, LPC heat treatment only uses hydrocarbon gases that are free of oxygen, such as acetylene. Therefore, IGO or decarburization are not a concern during LPC heat treatment. A schematic indicating the differences in LPC and traditional atmospheric carburizing is shown in Figure 1.

LPC can also be used to heat treat high-alloy steels, such as those used in the aerospace industry. Typical alloys are stainless steel – Pyrowear® 675 (P675) and X13VDW (ASTM XM32) – and high-alloy steels such as M50NiL and 9310. Aerospace industries have some specific requirements with respect to the installation of the furnaces (per AMS 2750F) and with respect to heat treatment in vacuum (per AMS 2769C).

Some of the issues with heat treating steels for the aerospace industry comes from the fact that high-alloy steels can easily form carbides. The carbide formation of elements that should be present in the matrix of the steel alloy is detrimental for the alloy’s purpose and performance. Chromium, for example, can easily form carbides. In stainless steels, the depletion of chromium from the matrix, due to carbide formation, can increase the chance of undesirable corrosion. 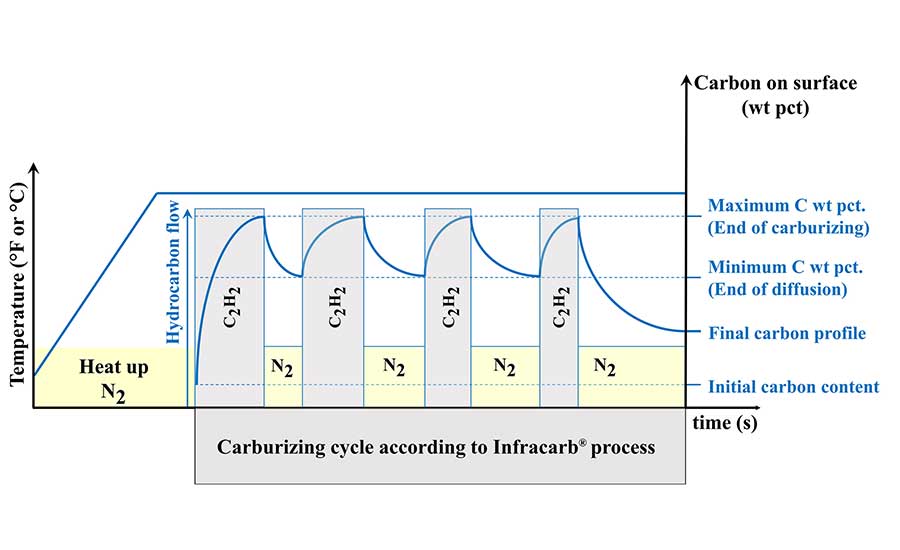 Fig. 2.  Schematic showing the LPC process developed and verified by ECM software CBPWin®: the carbon enrichment step by injection of acetylene and the carbon diffusion step by the diffusion of nitrogen

Also, the formation of massive carbides or network carbides are detrimental to fatigue and fracture performance. LPC allows for better control of carbon injection into the furnace. Therefore, it becomes easier to control the formation of massive or network carbides. The addition of microalloying elements such as titanium (Ti), niobium (Nb) or vanadium (V) can also contribute to reducing undesirable car-bide formation by forming TiC, NbC and VC, which also contributes to grain refinement and improves mechanical properties.

LPC is performed through sequential boosts of acetylene (for carburizing) and nitrogen (for diffusion) being injected into the furnace. During the acetylene boost, acetylene dissociates into carbon atoms and hydrogen molecules, which enriches the surface of the heat-treated parts with carbon. The next boost with nitrogen allows the diffusion of the carbon (absorbed on the surface of the part) to deeper layers. A schematic with the sequence of boosts is shown in Figure 2. The duration of each boost and the number of boosts are related to the selected temperature and the ECD targeted. This process is performed at constant temperature and pressure, which is approximately 10 mbar.

Different recipes were developed for different ECD and different temperatures for P675, X13VDW, M50NiL and 9310 steel alloys for the ECM Flex vacuum furnace (Fig. 3).[4] More compact loads can be heat treated in furnaces with smaller cells that are also compatible with AMS 2750 standards, such as the ECM Nano vacuum furnace (Fig. 4).

In these furnace systems, acetylene and propane were used as the hydrocarbon gases for the heat treatment. The metallurgical requirements were homogenous ECD, no massive or network carbides, and surface carbon content in the range between 0.8-0.9 wt.%. The general chemical composition of the heat-treated alloys studied in this work are shown in Table 1.

High-pressure gas quenching (HPGQ) was performed by using nitrogen at 19 bar. The full heat treatment was LPC, hardening, cryogenic and temper. Measurements of the ECD with respect to different specifications (50, 52 and 58 HRC) were obtained for the LPC (carbon injection + diffusion) and for the full heat treatment (Table 2).

For the X13VDW steel alloy, two different heat treatments were developed. For the first one, the ECD target was 0.040 inch (1.02 mm) by considering a hardness of 52 HRC. The heat treatment was per-formed at 1742°F (950°C) by injecting a volume flow rate of 5,300 NL/hour of propane (C3H8) as the hydrocarbon gas. The total time for carburizing during the LPC process was 25 minutes and 40 seconds, which corresponds to 3.1% of the total LPC time. The diffusion process was performed in 13 hours, 18 minutes and 20 seconds, corresponding to 96.9% of the total LPC time. The total time for LPC was then 13 hours and 44 minutes. The steel parts were quenched with nitrogen at 19 bar, and temper was performed on these parts after carburizing and gas quenching. Table 2 shows the results for the full heat treatment, including temper.

The second heat treatment performed on the X13VDW was targeting an ECD of 0.088 inch (2.24 mm), also for a hardness of 52 HRC. The temperature used for the second heat treatment was 1796°F (980°C), and 2,500 NL/hour of propane was injected into the furnace for 13 minutes and 55 seconds, which corresponds to 1.27% of the total LPC time. Diffusion represented 98.73% of the heat treatment, which was performed for 17 hours, 58 minutes and 5 seconds. The total time for LPC was 18 hours and 12 minutes. HPGQ was performed by injecting nitrogen at 2 bar in the quenching chamber, and the other steps of the full heat treatment were composed by LPC + hardening + temper (Table 2).

For this LPC application, a recipe at 1760°F (960°C) was developed. The total time for LPC took 9 hours. The carburizing sequential steps took 20 minutes and injected 5,000 NL/hour of propane, which is 3.7% of the total heat treatment. The diffusion step took 8 hours and 40 minutes (96.3% of the total). HPGQ was performed by using nitrogen as the quenching gas at a pressure of 20 bar. The ECD target for this study was 0.074 inch (1.9 mm) at 50 HRC for the full heat treatment, which consisted of LPC, hardening and temper. Table 2 shows the results for LPC and full heat treatment performed on the M50NiL. 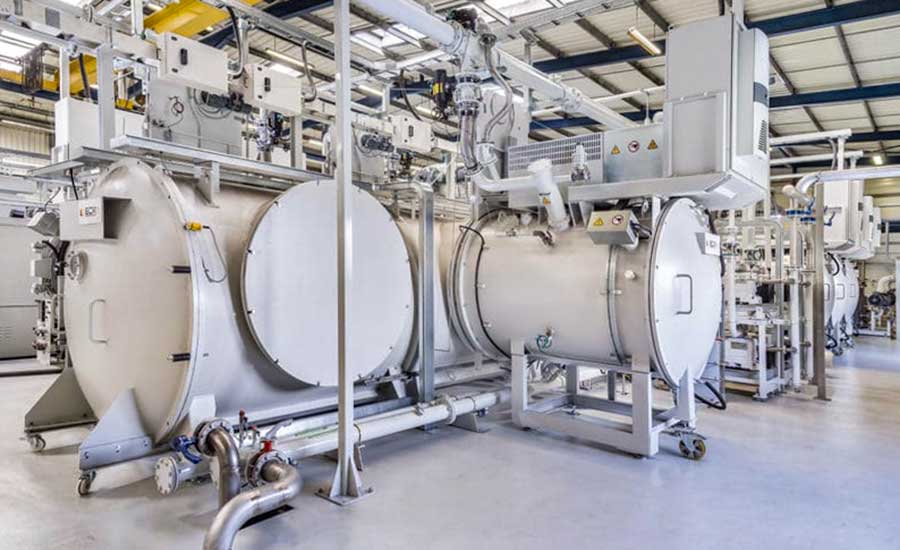 Two different heat treatments were performed for the 9310 steel alloy. For the first one, the ECD tar-get was 0.023 inch (0.58 mm) at a hardness of 50 HRC. LPC was performed at 1706°F (930°C) by injecting 5,000 NL/hour of propane for 8 minutes and 25 seconds (8.4% of the total treatment time). Diffusion took place for 1 hour, 31 minutes and 35 seconds, which corresponds to 91.6% of the total LPC heat treatment. Therefore, the total LPC time was 1 hour and 40 minutes. The 9310 parts were martempered by using the StopQ system, and the pressure used at the HPGQ was 17 bar. The other steps for the first heat treatment performed on the 9310 were cryogenic and temper.

For the second heat treatment, the ECD target was 0.045 inch (1.14 mm) at 50 HRC. For that, pro-pane was injected into the furnace at a flow rate of 5,000 NL/hour for 19 minutes (3.1% of the total LPC time), and diffusion took place for 9 hours and 51 minutes, which corresponds to 96.9% of the total. LPC total time was 10 hours and 10 minutes. The parts were slow cooled for 4 hours until reaching 500°C and quenched to room temperature at a pressure of 2.4 bar. The other heat treatments performed on these parts were hardening, cryogenic and temper (full heat treatment). Table 2 shows the results for the first and the second heat treatments performed on the 9310 steel alloy for 50, 52 and 58 HRC. 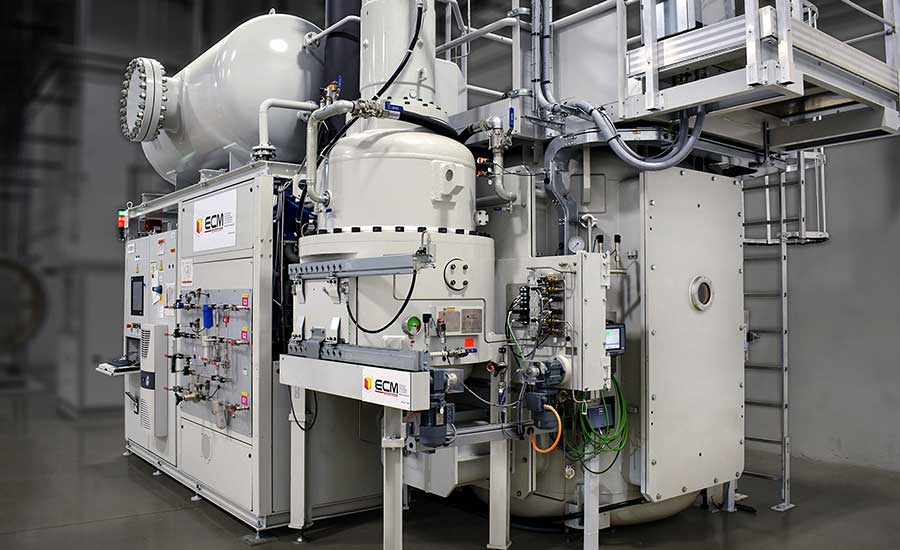 All graphics provided by the author.