It’s already November, which means it’s the time of year that we shine a spotlight on the aerospace segment of our industry. Aerospace involves such things as commercial jets, military, space travel, satellites and a variety of equipment (e.g., planes, helicopters, rockets, drones, etc.).

The aerospace industry is growing, and this is good news for many heat treaters and manufacturers that deal in this market. It is believed that the space economy could triple in size to more than $1 trillion over the next decade. A Fidelity fund manager is quoted as saying, “I’ve been covering aerospace for six years, and two new companies went public in the first five years. Now, two new companies go public every week.”

A reason for the growth we are seeing, particularly in space, is that the cost has come down. Innovative startups have lowered the cost of making rockets and launching them. An example of this innovation is that SpaceX is now using a recycled rocket to take astronauts to the International Space Station. With all of this advancement, it is believed we will have a moon colony by 2040. Reports indicate that China and Russia plan to build a joint research station on the moon in the next decade.

Another example of the innovations seen in rocket technology and aerospace in general comes by way of additive manufacturing (AM). One company is building its rockets using AM. Check out this video to learn more. In August, it was reported that scientists in India repaired aero-engine components using AM, which is less costly and reduces repair time.

Satellites account for 88% of space-related revenues. Today’s satellites benefit from miniaturization advances. Once the size of a school bus, many satellites are now smaller than a breadbox. Owing to this fact and other developments, countries such as Bhutan, Costa Rica and Ethiopia have launched satellites. 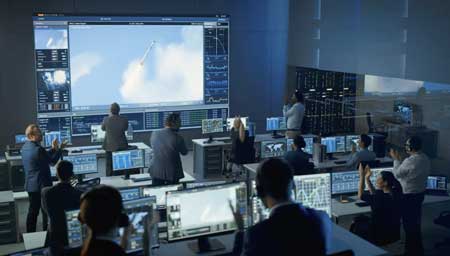 Defense plays a large role in and contributes big money to the aerospace industry. Boeing recently received a U.S. Department of Defense follow-on contract that is valued at up to $23.8 billion over 10 years for C-17 Globemaster III’s worldwide mission readiness. The program is currently funded through September 2024 with a Phase I award of $3.5 billion.

Illustrating both defense and satellites, the U.S. Space Force is pursuing a new generation of satellites and associated ground systems to better detect enemy missiles and provide a deterrent against counter-space weapons. Space Force plans to launch the first Next-Gen OPIR satellite in 2025 and have all five in orbit by 2030.

With the growth of electric propulsion on ground vehicles, aerospace electrics can’t be far behind. To that end, the generator that will be at the heart of what Rolls-Royce says is the most powerful hybrid-electric propulsion system in aerospace has been tested and delivered. The generator, and related power electronics, will form part of the 2.5-megawatt Power Generation System 1 (PGS1) demonstrator for future regional aircraft. In addition to hybrid-electric propulsion, the generator could also be used as part of a “more-electric” system for larger aircraft or within future ground or marine applications. The generator is about the size of a beer keg but produces enough electricity to continuously power around 2,500 homes.

Whether it is generators that can be used for other applications or helicopters and planes used for ground-based rescues and firefighting, aerospace technology improves our lives on terra firma. Satellites are improving crop management and will create an entertainment boom when satellite internet service reaches remote areas.

We hope this quick review has improved your awareness of how aerospace impacts us whether we fly or if we choose to stay on the ground.