PIDs need not be anxiety-producing. Let’s break it down to reduce the stress.

The three letters P-I-D send shivers down most spines; tuning may induce an actual headache. This has proven true for decades, but why is the concept so overwhelming? This article will attempt to answer that difficult question with simple considerations. But before we simplify, let’s credit one of the world’s deepest thinkers. Einstein defined insanity as:

“Repeating the same thing over and over and expecting different results.”

Katie Bastine, quality manager of Nadcap-certified Thermo-Fusion of Hayward, Calif., agreed to help and offered one of the company’s many endothermic, nitriding or batch furnaces. We settled on a vacuum furnace with graphite heating elements, which is a perfect candidate because it was relatively quick to respond and easy to manipulate. 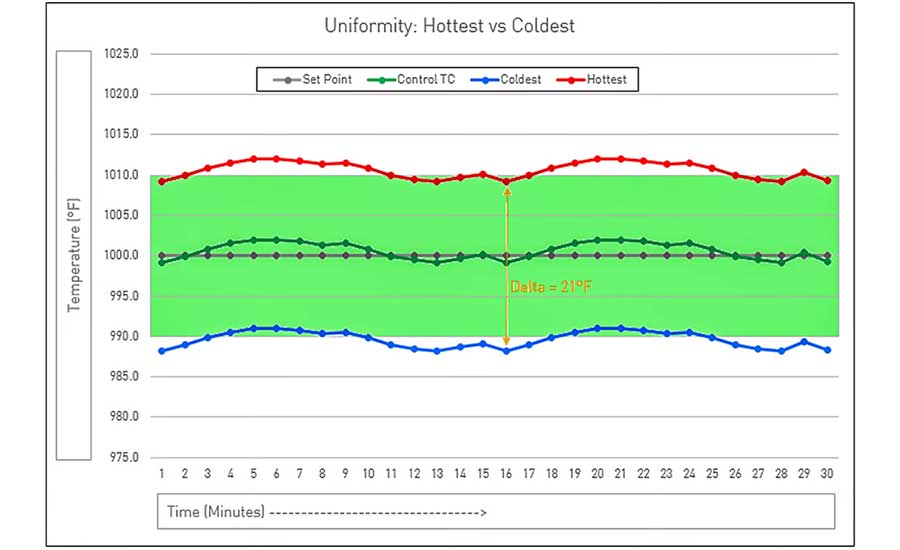 According to author Malcolm Gladwell, we need a basic understanding of PIDs, perhaps no more. His fantastic book Blink details the brain’s ability to thin-slice situations – meaning the ability to make quick, often correct, decisions. He discusses in great depth the importance of data for experts, but he hypothesizes too much data for the average person negatively influences the decision-making process. He claims “the role of those other factors is so small … that extra information is more than use-less. It’s harmful. It confuses the issues.”

This may be our mistake: too much information freezing our ability to act rather than empowering us. The goal of this article is not to train experts but rather help with that often-paralyzing first step.

Proportional band (Pb) compares the error at a single moment or the difference between the set-point and control TC. Adjusting the Pb parameter determines how large an error is required to re-duce/increase output.

Integral (or reset) compiles this same error over a period of time, appropriately adjusting to the Pb’s output.

Derivative (or rate) monitors the rate of change, estimating future error and “applying the brakes” when necessary. The remainder of this article limits theory and focuses on observations. 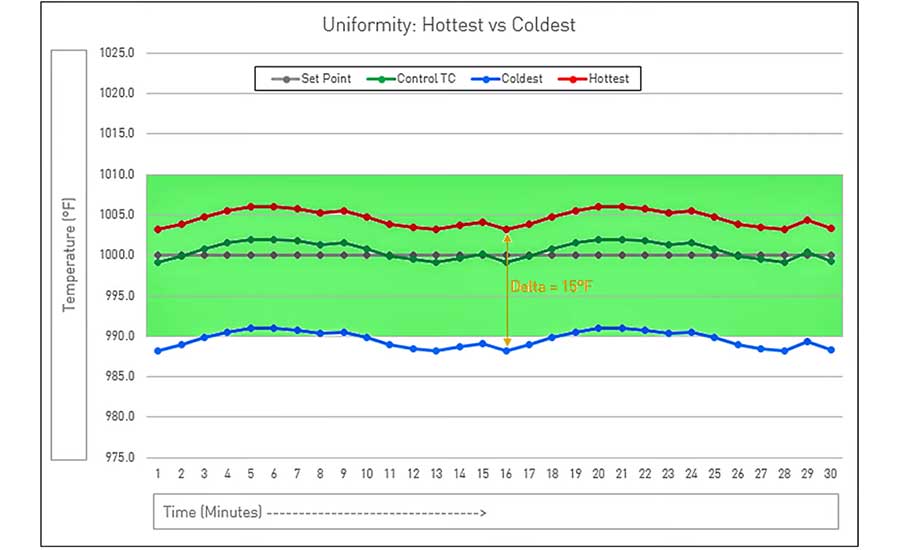 Before evaluating PIDs, it is important to agree what makes a good one. That list could be quite long, so this article will intentionally avoid considerations such as repeatability and recovery time. Instead, we will evaluate:

Aggressiveness is when the output first reduces as temperature approaches final setpoint. Reducing too early sacrifices heat-up time while simultaneously improving overshoot. Like many PIDs, a delicate balance exists between any two parameters – a constant set of “give and take.” This consideration is less important when ramping to final setpoint because the output typically never reaches its maximum. 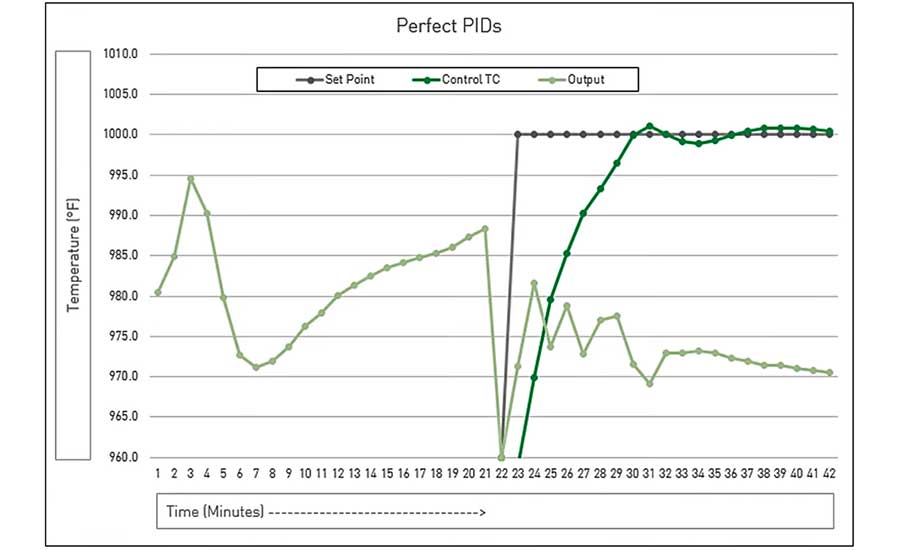 Are PIDs the problem?

Algorithms are stable by nature, input data -> calculate output. Thus, changes in behavior are rarely “failing PIDs” but rather some external factor. If ever there was a time to pause, this is it. Before embarking on the time-consuming effort of tuning, evaluate the furnace holistically. What changed? Are PID changes masking a physical issue? Make sure you are fixing the right problem.

Many confuse PIDs with uniformity. While these concepts coexist, uniformity tends to indicate the health of a furnace, which is influenced by such things as heating-system design, element/tube/valve condition, insulation, radiant effects, changes to rheostat/trim settings and convection turbulence. A negative change in one may result in a failed TUS and prove impossible for PIDs alone to overcome. Remember, a sudden, exaggerated loss in control suggests PIDs are not at fault.

TIP: Forget the TUS. If the control TC is good, then so are the PIDs.

Uniformity is defined by two characteristics: Delta and balance. Delta is the difference between the coldest and hottest temperature. Balance is the relationship between these temperatures and the con-trol TC. Consider figures 1 and 2 representing an AMS 2750F Class 2 furnace with +/-10°F tolerances.

PIDs will never improve uniformity. Poor uniformity (Delta) can be overcome by the aforementioned factors and (balance) by adjusting the control TC position or applying an offset (if allowed). The possible combinations are so wide they are beyond the scope of this article. 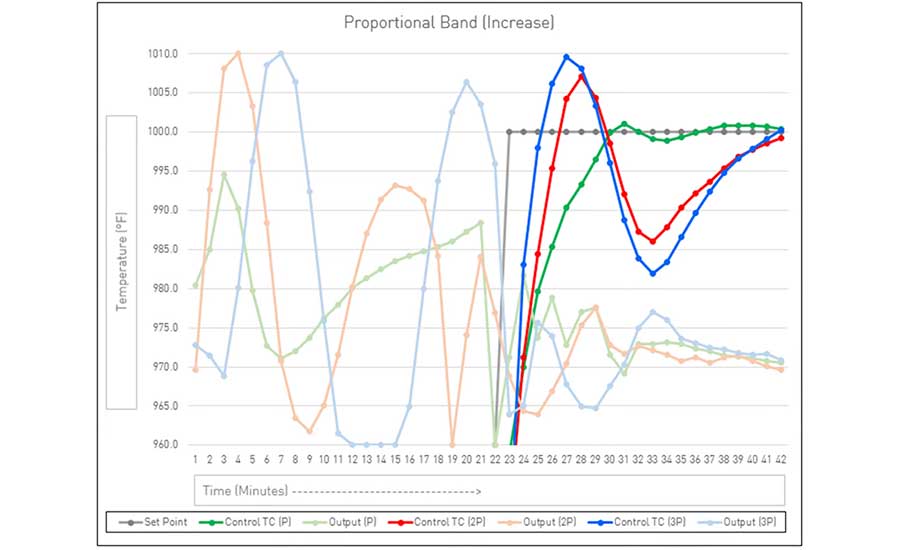 Output is an important (and often overlooked) tuning parameter. PID changes are driven by the control TC, but they have practical limits. These limits are often visible in the output well before they are in the control TC. Tuning efforts should always monitor the output for:

TIP: In addition to setpoint and control TC (PV), record output (CV) to better understand tuning. A lot hap-pens in one minute, so try recording every 1-5 seconds if possible.

Thermo-Fusion’s vacuum furnace ramped to 1000°F @ 40°F/min with an aggressive approach, mini-mal overshoot and continued a “straight line” at soak (using PIDs of 2.0/75/150). As the control TC neared soak, the output backed off 60°F before the soak temperature – neither too early nor too late. The output settled down after a few quick oscillations, suggesting the Pb was not too small.

Figure 3 demonstrates what PIDs should look like. Now let’s disrupt these values, learning from the result. We begin by exploring Pb’s effect because it has the most influence on the trio.

Proportional band influences when output first reduces and how fast it adjusts. The first mostly impacts furnaces experiencing immediate setpoint changes. All furnaces, including those that ramp to final soak, must consider the second – how fast the output adjusts.

A “sweet spot” exists for Pb. Let’s consider the extremes. A Pb of “∞” backs off very early but too slowly. This results in either overshoot followed by slow, rolling oscillations or no overshoot but also failure to reach setpoint. Same cause, but very different outcomes.

Figure 4 demonstrates the first example: reducing early but too slowly to eliminate overshoot.

TIP: Decrease Pb until the output “bounces around,” then slightly increase Pb. This approach offers diminishing returns, with the output eventually becoming unstable. 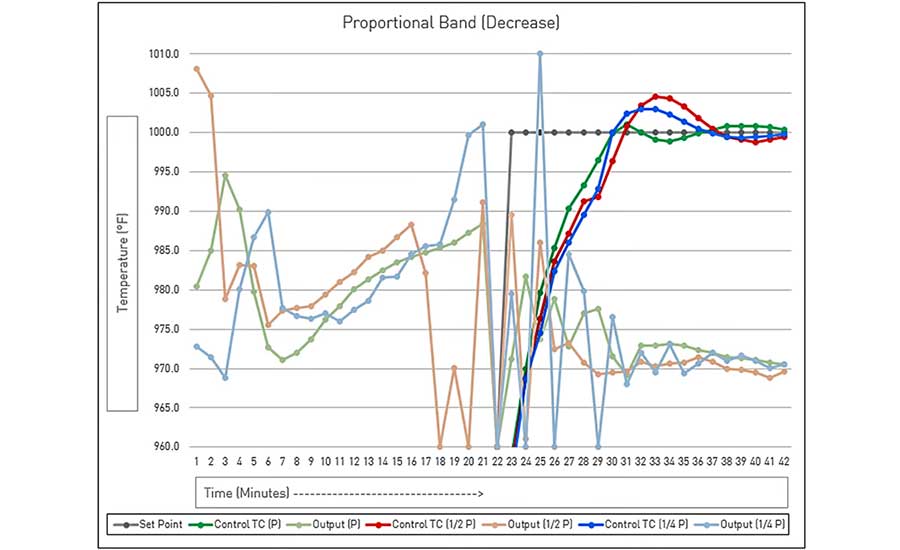 If increasing Pb slows the output, decreasing must offer the opposite effect. A Pb of “0.0” represents on/off control, backing off very late (at setpoint) but quickly (100% -> 0% immediately) followed by rapid oscillations. A smaller Pb presents a double-edged sword, which is an advantage to furnaces with an immediate control/output response but a disadvantage for those with a lagging relationship. This allows the output to wind up or down too much before the control TC responds.

TIP: Watch the output. If “bouncing around,” increase the Pb, which dampens output. 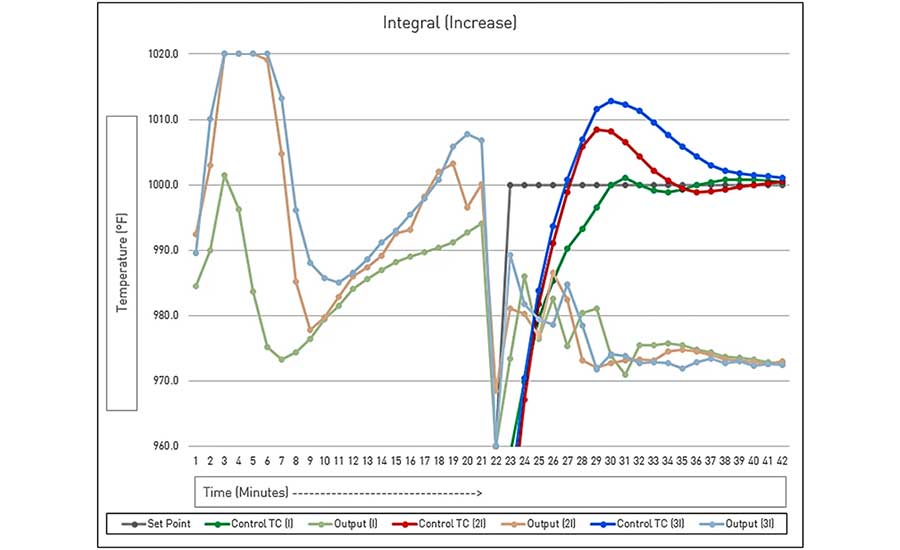 Integral considers past error, “winding up” as large error exists and adding to the output. Small error conversely “unwinds” the Integral. A larger Integral parameter adds more to the Pb’s output. This may improve aggressiveness, but it sacrifices other aspects of a healthy PID.

Too large an Integral overemphasizes previous error, potentially resulting in overshoot then quickly unwinding as the error becomes smaller, flattening the control TC. Integral has a second benefit: reducing “droop” as the control TC approaches soak only to prematurely stall. A third benefit compensates for a furnace that heats faster than it cools (or vice versa).

TIP: With similar overshoot to a large Pb, a large Integral differs with less undershoot before stabilizing.

If the control TC stalls before soak without closing, increase the Integral.

If the control TC looks more like a saw tooth than a sine curve, increase the Integral.

Too small an Integral eliminates the PIDs knowledge of history, leaving all the work to the Pb. Error can change rapidly at any moment, which results in an equally rapid change in output. An appropriately sized Integral offers a smoothing effect on the system. 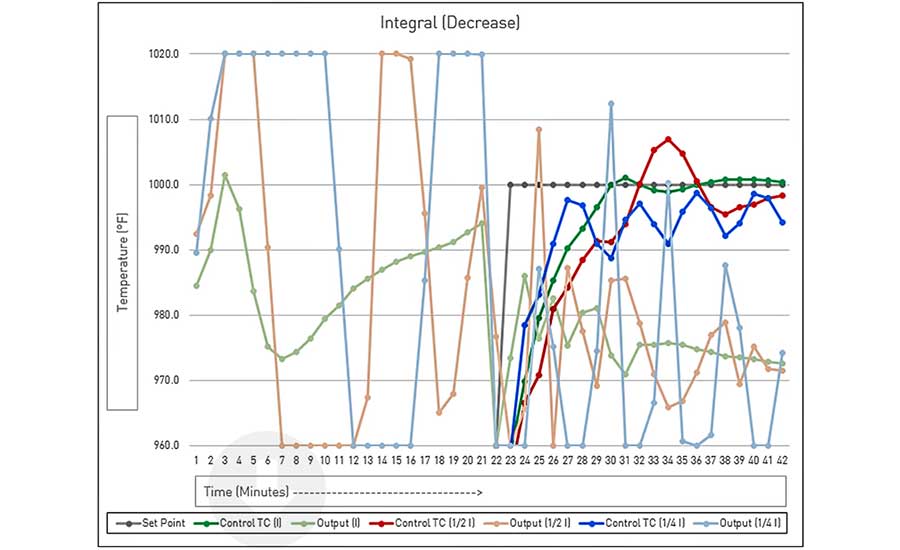 Derivative is difficult to simplify, but (channeling our inner Malcolm Gladwell) let’s try. Derivative is perhaps most easily thought of as a counterweight to the actions of P-I alone. Derivative evaluates the error’s current rate of change to estimate future error. This forecasting allows Derivative to premature-y reduce or increase output.

Derivative is frequently overused and often not required. Exceptions must be evaluated on a case-by-case basis. A visible indicator suggesting a benefit from Derivative is a delayed response be-tween the control TC and output. As output increases, does the control TC immediately rise? Or does it take a while to respond?

We hope this article provides the confidence to take that difficult first step. The beauty of PIDs is they are free to make and easy to undo. Therefore, do not be intimidated in taking that first step. Worst-case scenario, you revert. Pair these tips with the following guidelines, and you will be fine.

If you want to learn more about this subject, check out this podcast. In it, Steven Christopher talks with Reed Miller about PIDs and more.

All figures provided by Steven Christopher unless otherwise noted.

Steven Christopher is a contributing writer and West Coast Sales Engineer for Super Systems, Inc. He can be contacted by email here christopher@supersystems.com.