Now Hiring? Nice Try: What Governments are Doing to Help

Every Labor Day weekend, the current occupant of the Oval Office makes a speech about the importance of American workers and highlights their efforts to support the average family. Some use the opportunity to make new policy announcements.

I remember when then-President George W. Bush announced in September 2003 the creation of an Assistant Secretary for Manufacturing. (We were lobbying for an Undersecretary or, better yet, Cabinet level). In looking at his first eight months in office, this current President will not break that streak because he pledged to make workers a priority, especially those belonging to unions. But where have all those workers gone?

The Federal Reserve has the most recent labor-force participation rate at 61.6% in June 2021, down from a pre-pandemic rate of 63.3% in February 2020. While this small percentage change might feel insignificant, it accounts for millions of fewer Americans in the workforce. When President Bush announced the Manufacturing Assistant Secretary in September 2003, the labor participation rate was 66.1%

Looking more closely at manufacturing, the Department of Labor reported 814,000 job openings in manufacturing during May 2021, with 458,000 of those being in durable-goods manufacturing. The very same data reported 6.6 million Americans not in the labor force who want a job. Despite the economy adding 943,000 jobs in July, virtually every manufacturer is experiencing two types of disruptions: supply-chain and workforce.

A late-June 2021 survey showed that 14% of Americans cited child care as the reason for turning down a job offer. Tying for the second-most-cited reason at 13% was “I receive enough money from unemployment insurance without having to return to work.” Other surveys put the rate closer to 20%. More than half the states terminated their participation in the federal supplement program, ending the additional $300 a week payments ahead of the September 6 expiration of federal support. Initial data did not reveal a mass return to work in those states ending the supplemental payments early, but moderate Democrats have said quietly the benefits likely should have terminated earlier.

Regardless of the reason able-bodied Americans are not returning to work, employers and the federal government both know the worker-shortage problem is real, even if it is not entirely new.

The Manufacturing Institute working with Deloitte released a report in May 2021 showing that manufacturers will have 2.1 million jobs go unfilled by 2030 – costing the economy as much as $1 trillion. The report also revealed that “the manufacturing industry recouped 63% of jobs lost during the pandemic, the remaining 570,000 had not been added back by the end of 2020, despite a near-record number of job openings in the sector.”

Workforce is typically a local problem that needs local solutions, but the federal government is trying to help bring together workers, educators, trainers and employers. Congress included, as part of the pandemic response, a grant program called the Good Jobs Challenge in the American Rescue Plan Act. It is designed to help get Americans back to work by developing and strengthening regional systems to develop sectoral partnerships. The goal of regional workforce training systems is to create effective employer-driven training programs that will connect the skills needs of employers with workers and help workers find employment. Funded through the Department of Commerce, the grants will award up to $25 million, but other programs at the state and federal level also aim to support connections between businesses and workers. 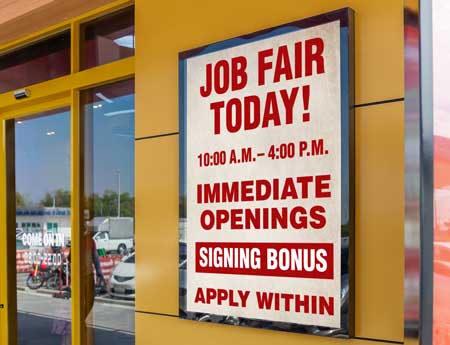 Manufacturers and other businesses facing worker shortages are looking to explore all options on the table when recruiting new employees. From targeting local schools, providing referral incentives and public advertising, employers are trying everything they can … and government officials are taking notice.

In July, New York began accepting applications for a $175 million Workforce Development Initiative to address industry needs and improve regional talent pipelines. Florida, also in July, opened its application portal for small-business grants to reimburse companies up to 75% for pre-approved training costs. Pennsylvania has a pre-apprentice and apprenticeship grant offering each employer $3,000 per apprentice for a maximum of five apprentices. Indiana’s Employer Training Grant reimburses employers up to $5,000 per employee who train, hire and retain new or incumbent workers to fill in-demand positions.

Other states provide tax incentives that businesses should also explore. Ohio provides tax credits of up to $9,600 to employers who hire service-disabled or unemployed veterans. Started in January 2020, Illinois offers a tax credit up to $5,000 for qualified educational expenses associated with qualifying apprentices. Connecticut’s Manufacturing Innovation Fund Apprenticeship Program provides a $5.00 per hour wage subsidy reimbursement.

In Washington, D.C., the House of Representatives moved a bill increasing Perkins Basic State Grant funding by $50 million and added a $100 million competitive grant program to carry out middle- and high-school career and technical education innovation programs. Lawmakers are also reviewing federal government policy toward education and training, shifting the focus from four-year degrees and hours-based learning to competency-based.

The U.S. Congress is in the process of renewing the Workforce Innovation and Opportunity Act. More critically for manufacturers, policymakers have not updated the National Apprenticeship Act since 1937. Eighty-four years is a long time to go without Congress acting on a fundamental piece critical to manufacturing in America. Much has changed since then, and lawmakers are belatedly hoping to move this year on those two bills.

The government throwing money at a problem is rarely the solution – often they exacerbate an issue by throwing good money after bad. But policymakers at all levels of government have taken notice, not just of the workforce shortage but the challenges that manufacturers in particular face recruiting new workers.

It is rare for employers, unions and politicians of both parties to all agree on a single issue. Manufacturing is essential to U.S. national and economic security, and we need more Americans in those careers. The question we all face is how to get those potential workers to see the jobs available and actually show up for their job interviews.