Engineering and Heat Treating for a Tooth Overlay Procedure: A Failure Analyst’s View

Last month, my right rear-lower molar broke. As shown in Figure 1, the fracture event resulted in a chipped condition. The red arrows show the boundary (edge) of the missing piece. The green arrows highlight a much darker gray portion of my tooth along the upper edge. Dark means less of the tooth material that the X-rays have to penetrate before getting to the film or digital recorder. The remaining intact upper edge of this same tooth (inside the crescent defined by the green arrows) is noticeably thinned. This resulted in a sharp edge, as the now unprotected softer inner layers gradually wore away.

The edge thinning had taken a long time to happen, and I had been concerned about my back four molars for a while. Once this chip broke off, I was even more nervous because tooth enamel is quite brittle. Having spent so much of the last 30 years studying broken things, I could easily imagine a new crack propagating down into the root of my tooth. I am into my seventh decade and never had to have a filling or any other dental work in my life – beside the removal of eight teeth as a young person because “my mouth was too small to hold them in proper alignment.” I had not seen a dentist in a long time. It was time to cave in and take action!

I made an appointment and saw the dentist. The good news – after a horrible session with a giant digital X-ray camera head inserted into my mouth 18 times for the full set of X-rays they insisted on taking – was that my teeth were not rotten. The dentist told me he could make a crown or, for less financial outlay, a composite filling.

By then, however, my fellow materials engineer/failure analyst friend had listened to my sad tale of woe and told me I must get a Cerec repair. Cerec stands for Chairside Economical (although other renderings of the acronym specified Cost Effective) Restoration (with) Esthetic Ceramics. This dear friend is very smart, and I generally at least investigate following her advice. My research indicated that it was good advice, but that dentist didn’t have Cerec. Off to a second dentist I went.

After the X-ray seen in Figure 1, they put a little optical camera (pediatric size, for which I was grateful) in my mouth to obtain a 3-D digital model of the remaining tooth shape. Figure 2 shows the little CNC machining center that they had in the adjacent office. The inset shows the edge of the green ceramic block as it was being machined with a diamond burr (Fig. 3). The meaning of “green” here is “un-heat treated.” The actual color of the insert was purple at this time. More on the burr later. 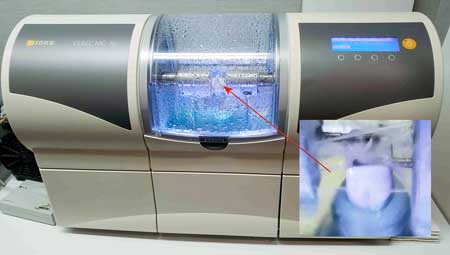 Figure 4 shows the heat-treat oven. The technician was kind enough to let me watch and photograph all of this, and I gave her a little engineering lesson. We see that the furnace has started to heat up, but the chamber is open. I told her that might be to help reduce the chances of thermal shock as the little chunk of ceramic is gradually heated to bring it to full strength. Even metals are preheated during high-heat thermal processing to prevent distortion and cracks. Ceramics, being more brittle, are likely even more sensitive to cracking from extreme thermal stresses.

The inset at upper right of Figure 4 shows the now off-white chunk of ceramic that will soon be adhesive-bonded to the lightly ground surface of my tooth. The technician did not have any theories about how they control the color, or color change, of the blanks.

The dentist explained that my two rear teeth had sharp edges as a result of chewing. He rounded off the remaining sharp edges of the “subject tooth” and also of the mating upper tooth. While sound human teeth have enamel entirely enclosing them, I recall my heat-treating book explaining how rodents’ teeth always remain sharp because they have hard enamel only on the front surface. 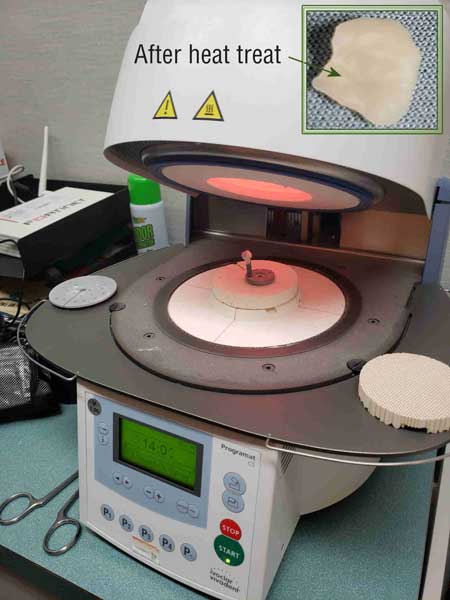 This was given as a comparison to a carburized steel tooth for a piece of mining equipment. As the soft back is worn away, narrow chips break off, exposing a new strong, sharp biting edge. Rodents’ teeth, again unlike human teeth, keep growing as long as the animal is alive. In the case of a tooth on a bucket used for mining hard rock minerals, the tooth is designed as a consumable repair part. Getting back to my tooth, once the enamel on the inner surface of the cusp of the tooth was worn away, chewing forces could more easily bend the remaining thin shell of enamel and cause it to break away.

On the subject of tooth damage, many of my teeth have gum-line grooves. A friend who is a retired dental technician insisted that gum-line grooves are a result of brushing horizontally and using an excessively hard toothbrush. I never admitted to her that I was suspicious of that theory because I didn’t brush my teeth that often for a long time, and that was when the grooves appeared. I became convinced that this was a great example of crevice corrosion. She was unimpressed with my theory. Last year while researching my failure-analysis book, however, I found out that dentists are now admitting that this can be a source of gum-line grooves. This new Cerec dental technician informed me that it is now thought that gum-line grooves may be exacerbated by flaking of the enamel due to bending stresses. This location, which is near the bone socket, is subject to higher stresses than the rest of the tooth.

Figure 3 showed the burr used to machine my molar. The technician announced that the CNC machining instrument had determined that my ceramic overlay was the last to be made with that burr because the dimensions were no longer within specification. I asked if I could have it for my “museum of failure.” 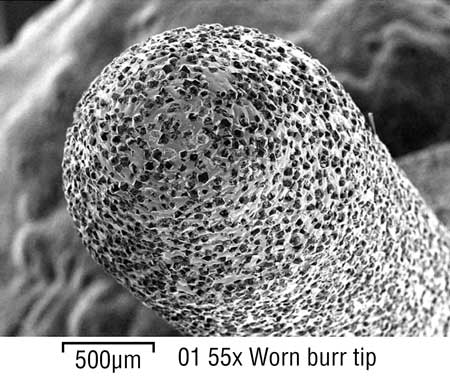 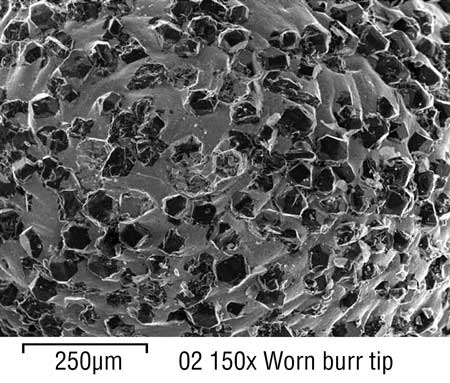 Figure 5 shows the tip in a view obtained using a scanning electron microscope (SEM). Figure 6 shows a higher-magnification view. We can see the protruding abrasive particles. We can see that a few are missing. It’s hard to believe that the instrument was able to detect such a minimal amount of wear. I did not inspect the entire working surface with the SEM.

Figure 7 shows the EDS data for the surface composition of a portion of the surface of the tool. The electron beam penetrates a little less than 1 micron into nickel (there are 25.4 microns in 0.001 inches) and to a significantly greater depth into carbon at the instrument settings I used. The main elements present are nickel (Ni) and carbon (C).[1] Note that the EDS method is notoriously imprecise for low-atomic-weight elements (including carbon), especially when the surface is not flat, which this clearly is not. However, EDS gives us a good idea of what elements are present. I have additional data (additional blue spectra not included here, similar to Figure 7) that show almost pure nickel in the bright areas and almost pure carbon in the dark areas.

Figure 8 shows an EDS element map. This is a powerful tool for materials characterization and failure analysis. We have a gray-scale image of the part. The EDS micro-chemical analyzer creates a color to represent the composition at each pixel and overlays it onto the gray-scale topological image. In this case, I “told” the EDS software to make the nickel-rich areas red, the carbon-rich areas green, the silicon-rich areas pink and the oxygen-rich areas blue. The fact that most of the area shown is either red or green shows us that the nickel and carbon are mostly separate. If you are colorblind and want to see the individual element maps, please write to me to ask.

Note that the green is associated with the protruding particles that are actually cutting the ceramic blank. See the red “hole” at the center of the image. One of the carbon-rich particles has been pulled out. This appears to be how the wear is degrading the tool over time. The topological images did not show obvious evidence of scraping of the nickel itself. 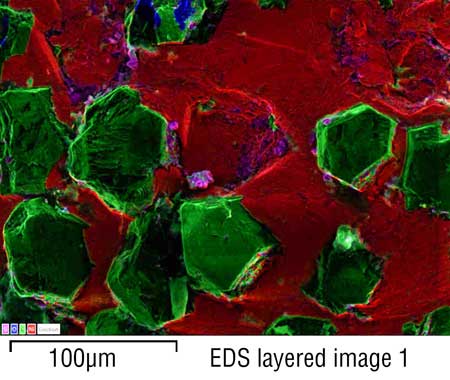 The blue areas are unlikely to be pure oxygen, which is a gas. SEMs operate in a partial or high (in my instrument’s case) vacuum. Therefore, it’s likely that the oxygen is present as an oxide but of an element whose overall concentration is so low that the mapping software did not detect it. Alternatively, I might have told the software to only include the four most concentrated elements in the display.

In any case, note how there are little patches of blue that are pressed into the green (suspected diamond) abrasive particle at the top of the image (just left of center). This may be residue from the ceramic blank that the burr was used to machine. Many common ceramics are oxides.

My adventure at the dentist allowed me to have a lighthearted look at some specialty technology items from everyday life. We did not formally address the issue of failure versus damage. The tool wear apparently happened at the expected rate, so the burr did not fail; it simply wore out as the manufacturer predicted. I am 62 years old, so I really can’t complain that my tooth failed. My teeth are about the most robust and least demanding part of my physical being. I apparently chew my food preferentially using the right side of my jaw, and the enamel wore out.

The sharp edges of exposed enamel on the left side are limited to a small area, and the edges are not as sharp as the other side before the one tooth chipped and the other was rounded off a bit by the dentist. Looking at the machining and heat-treating processes used to make my new dental prosthetic gave us a chance to explore some industrial heating concepts (preheat to avoid thermal shock) and some lab tools (scanning electron microscope and EDS micro-chemical analysis).

Interpreting EDS data with the new instruments can be quite intuitive (element mapping), but it is also easy to misinterpret the data. I can’t tell you how many analysts think that the carbon peak in an EDS spectrum is calcium. It’s easy to confuse quite a number of atomic pairs because the peaks are so close to each other. As in any field of expertise, it requires knowledge and experience to understand what the data mean. Computers make it easier to get data, but the computer on its own can’t determine the quality of the data.