This article looks at the benefits of scalable and configurable induction power supplies.

For decades, induction heating has been widely used across many industries for heating conductive materials. Among the key advantages of induction heating are the higher energy efficiency and the lower environmental impact compared to most other heat sources.

Induction heating power supplies are frequency converters that convert power from the utility-line frequency to single-phase power at a higher frequency, depending on the specific heating application.

One of the challenges of most induction power supplies is that they cannot be easily scaled for higher-production demand or be easily reconfigured for a different application. This is mostly due to the traditional design of the power inverters.

With the introduction of patented SmartPower™ modular induction technology, induction systems can be easily reconfigured or upgraded. This allows for lower initial cost and the possibility to upgrade a development system to a production system.

Ability to Configure and Reconfigure the Systems for Different Power Requirements, Multiple Outputs

The induction power supplies are made from building blocks known as RF modules. Each RF module is installed in a common cabinet but is directly connected to the AC line, making it an independently operating power source. Each module is rated to deliver up to 25 kW of output power, but other power denominations are also possible and available. These modules can operate independently or in conjunction with each other. Up to 24 modules can be configured to work together to deliver power levels up to 600 kW.

Another unique feature is that these RF modules can be grouped together to work in any configuration and deliver power to up to four individual inductors or outputs. For example, one output can be configured to operate with four modules (100 kW), a second output can be configured to operate with one module (25 kW), a third output can be equipped with two modules delivering 50 kW and so on. Thus, the system can be used to heat different loads simultaneously, saving floor space for multiple power supplies and cooling systems. 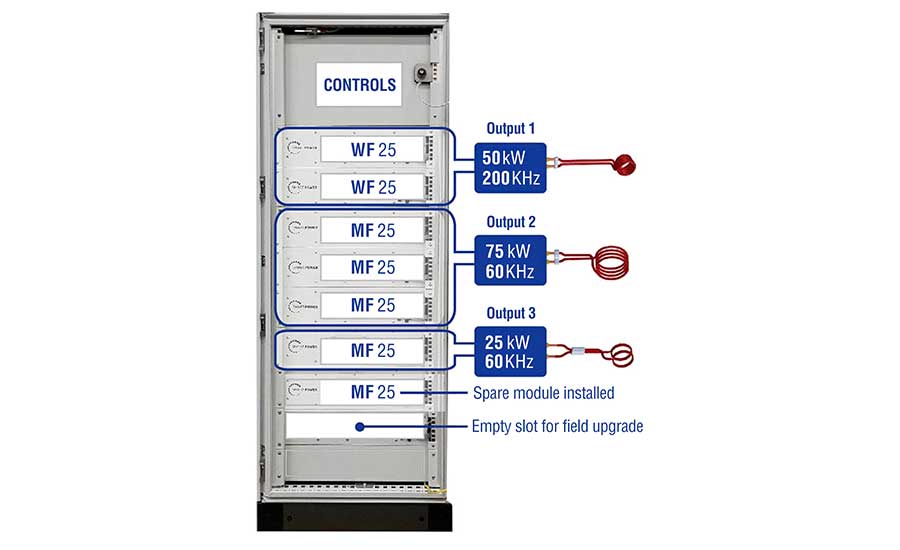 Furthermore, each output can be configured to operate in different frequency ranges. Several frequency ranges are available: 2-20 kHz, 6-60 kHz, 40-200 kHz and 150-400 kHz. This feature is especially beneficial for heat treaters working with a variety of part sizes and looking to achieve different hardening depth or heat-treating parameters. 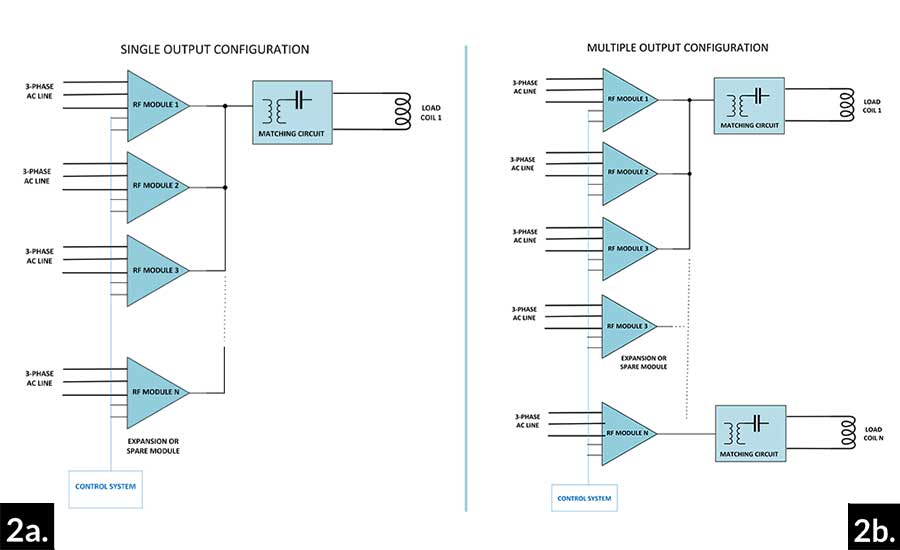 Modular induction technology makes it possible to perform an on-site upgrade of the available power. The user can purchase a system and have it upgraded later in case their production volume increases or if they need to add extra capacity to their production line. How does that work?

Each cabinet can hold up to eight modules but can be initially equipped with less power. For example, a heat treater is planning to process certain parts, and 75 kW of power is enough to meet their production rates. They can purchase a SmartPower system with three 25-kW modules, leaving the cabinet with five empty slots. Later on, they can double their production rate or add another production line by purchasing three extra 25-kW modules. They can install them in the existing cabinet and double the power output to 150 kW or add them as a second independent output to end up with an induction power supply with two 75-kW outputs. Upgrading the system is performed at a fraction of the price of a new system with the same capacity, and it can be accomplished in the field in just a few hours. As long as the installed utility power allows it, no additional installation cost or floor space will be required. 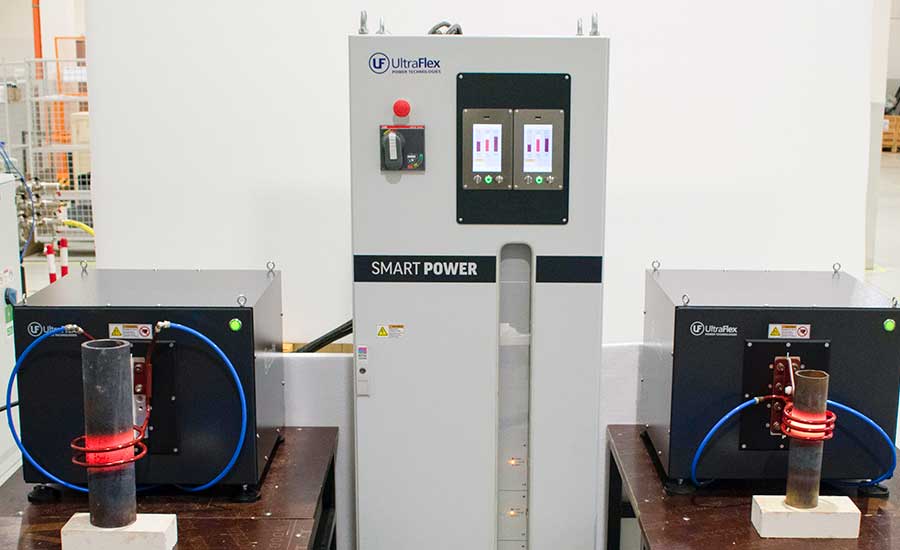 The modular approach used in these induction systems can also be utilized to guarantee almost zero downtime. This can be achieved by adding an extra module to an existing power output. For example, an annealing process requires a total power of 100 kW (4 x 25 kW RF modules), but a spare 25-kW module can be installed, allowing for a backup module with an extra 25-kW capacity.

The control system is designed to operate all five power modules at a reduced power level (80%) to achieve the required 100 kW. If one module fails, it can be disabled. The control system will detect that and compensate by turning on the remaining four modules at 100%, delivering the required 100 kW. This will allow the production process to continue without interruptions until the scheduled maintenance time, when the failed module can be replaced or repaired.

The patented “direct-digital-step” control used in this modular technology has been made possible by the utilization of the latest semiconductor technology – silicon carbide (SiC) MOSFETs (metal-oxide semiconductor field-effect transistor). These devices operate very efficiently due to significantly lower switching losses, and they are replacing the traditional IGBT devices used in induction heating systems for decades.

Simply explained, direct-digital-step control is an algorithm that turns the independently controlled modules on and off as the power demand changes, ensuring tuning flexibility and efficient energy conversion. The use of efficient semiconductors in combination with advanced control algorithms increases the power conversion efficiency of this technology to over 95%.

In addition, efficient operation of the modular systems requires less cooling capacity, which contributes even more to the overall system efficiency and cost. 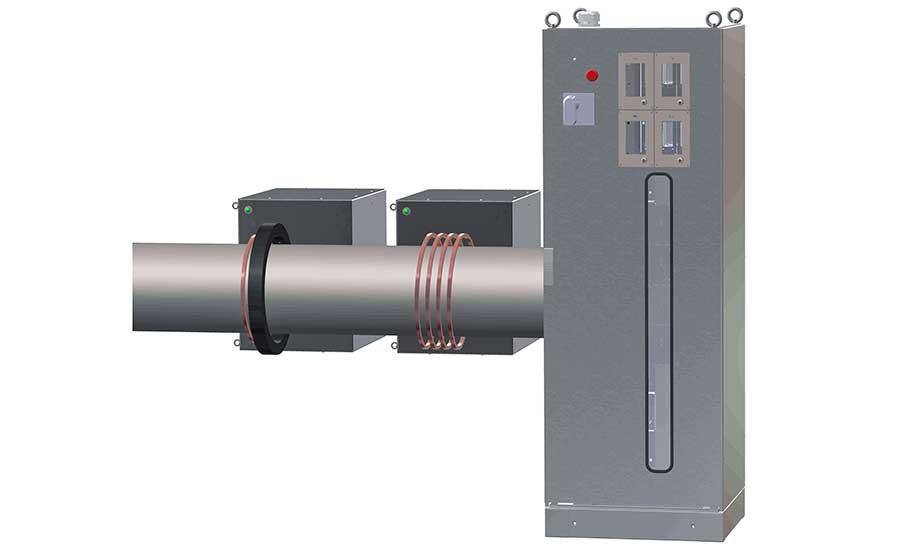 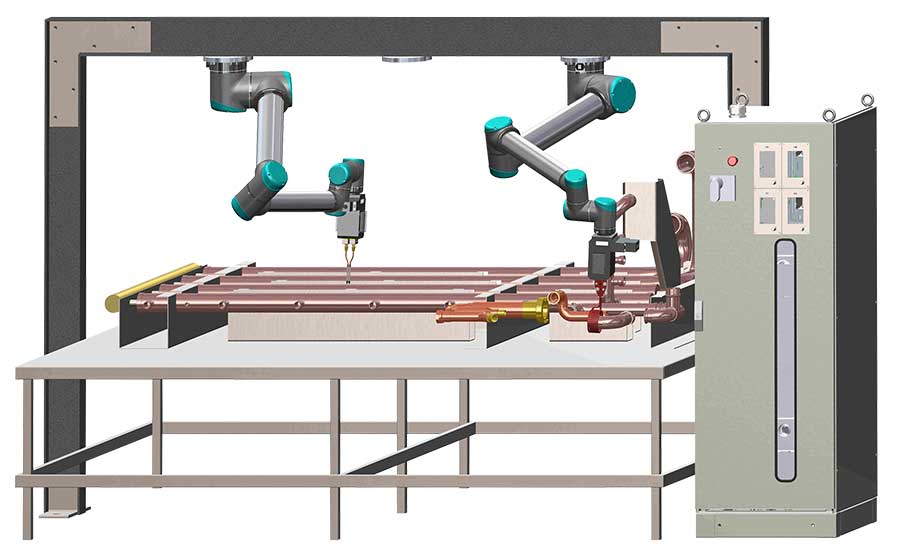 The ability to connect multiple outputs with different frequency ranges is often used in the heat-treating industry, where one high-frequency output can provide the necessary case depth for hardening and a second or third output, equipped to operate at a lower frequency, can provide the tempering or annealing stage of the heat-treating process. Having different frequency outputs can be also used to achieve a wide range of hardening case depths without compromising productivity.

Many applications require zone heating capabilities, with each zone being controlled independently and maintaining a certain temperature profile. Utilizing modular induction heating makes such a task easily achievable in this case.

Zone heating is widely used in semiconductor and MOCVD (metal organic chemical vapor deposition) industries, where different heating zones with tightly controlled temperatures within the reactors are critical for the crystal-growing or deposition processes.

Zone heating can also be used in heat-treating or curing induction furnaces, where the heating coils can be broken down in separate sections (coils) and each coil can then be supplied by a separate power output. This way, each zone can have its own temperature profile or heating parameters.

For example, a heat-treating induction furnace can be segmented to have a preheating coil, an extra coil that heats the parts to hardening temperature and then a section where a coil will heat to lower temperature to temper the parts.

Another application for separate zone heating is steel billet-heating induction furnaces. Energy efficiency in those furnaces can be significantly increased by having two separate outputs (zones): a preheating zone, where the induction system is tuned to heat the steel to Curie point so that it loses its magnetic properties; and a heating zone, where the induction system and coil are tuned for post-Curie temperatures and where the behavior of the non-magnetic load changes significantly.

An example of such an installation is an induction brazing station where multiple coils may be needed to braze different types and sizes of joints. In this case, a modular induction heating system would be a good fit because it provides multiple outputs tuned to different coils and frequencies. The coils can be mounted on robotic arms, manually operated or a combination of both.

Using modular induction systems in a multipoint heating installation provides extra flexibility and the ability to quickly reconfigure the outputs and add capacity to an output. It also allows the user to configure additional outputs without significant investment, extensive lead times or production-line changes.

Mario Metodiev is a contributor from Ultraflex Power Technologies