Innovative deposition techniques that leverage the unique characteristics of yttrium aluminum garnet (YAG) are enabling realization of this material’s performance advantages as a thermal-barrier coating at ultrahigh temperatures.

Yttria-stabilized zirconia (YSZ) has long been the state-of-the-art thermal-barrier coating (TBC) material for gas turbine-engine applications. But as turbine inlet gas temperatures are pushed to new highs, YSZ is rapidly approaching its intrinsic limits. Despite outstanding properties that have kept this material at the forefront of gas-turbine technology for more than three decades, YSZ is only stable up to 1200°C (2192°F) – limiting maximum turbine operating temperatures. Advanced TBC materials are needed to support the higher firing temperatures of next-generation gas turbines.

One promising material system is yttrium aluminum garnet (YAG), which is thermally stable up to its melting point of 1970°C (3578°F). Thus far, manufacturing challenges have prevented the commercialization of YAG coatings for gas-turbine applications. However, new research funded by the U.S. Department of Energy’s Advanced Manufacturing Office (AMO) may soon overcome these barriers.

While numerous ceramic materials have been proposed as high-temperature TBCs for gas turbines, only a few have been commercialized to date given the stringent application requirements. In addition to extreme temperatures, conditions in the hot section of a gas turbine also include an oxidizing environment, high pressures and high-velocity gas flows that can contain erosive and corrosive contaminants.

One particularly aggressive family of contaminants are the low-melting-temperature silicates, which include sand, dust and ash particulates. At gas temperatures beyond 1200°C, these materials begin to melt, forming glassy deposits of calcium magnesium aluminosilicate (CMAS) that can infiltrate into the porous structure of a TBC, inducing damaging thermal stresses.

Table 1 compares properties of three different TBC systems. The dominant TBC material in commercial turbine installations today is 7-8 wt.% yttria-stabilized zirconia (YSZ). While YSZ has a low thermal conductivity and high fracture toughness, its major limitation is its maximum operational temperature of 1200°C. Beyond this temperature, YSZ begins to destabilize and sinter. YSZ is also vulnerable to attack by molten CMAS, which can infiltrate and even partially dissolve the coating. One alternative to YSZ that has been adopted at higher temperatures is gadolinium zirconate (GZO). However, drawbacks of GZO include low fracture toughness, poor erosion resistance and high cost.

Yttrium aluminum garnet (YAG) has been less extensively studied than other systems partly because early research showed that conventional deposition techniques yielded an undesirable amorphous or semi-amorphous structure with poor durability.¹ However, YAG’s attractive properties, including thermal stability up to 1970°C and a thermal conductivity that decreases with increasing temperature, have stimulated renewed exploration.

This project is focused on overcoming manufacturing challenges to harness the performance advantages of YAG, supporting a step-change advancement in gas-turbine engine firing temperature and energy efficiency.

A New Deposition Method for YAG

The state-of-the-art air plasma spray (APS) process is the primary application method for TBCs at Solar. In the APS process, a powder is injected into a plasma plume, and molten particles are deposited onto the surface as “splats” (i.e., pancake-shaped lamellae) to build up the coating.

Unfortunately, this process is not viable for YAG, which does not form robust coatings from powder. But a novel technique called solution precursor plasma spray (SPPS, see sidebar) has shown new promise. Drawing from a liquid precursor rather than powder, SPPS enables deposition of YAG in the high-performance crystalline garnet phase. At laboratory scale, researchers from SST have demonstrated that SPPS YAG coatings can meet or exceed the performance of state-of-the-art YSZ for thermal conductivity, CMAS resistance, thermal-cycling durability and erosion resistance.¹

Solar is now collaborating with SST to transfer SPPS technology to a production setting, an effort that has included process development to overcome technical challenges associated with scale-up. For example, a 70% improvement in deposition rate was achieved by incorporating a higher-enthalpy plasma torch into the setup.

The project team was also able to increase the coating application distance by 50%, resolving a concern with the SPPS process for large and complex parts. Ultimately, successful process scale-up was validated through laboratory testing and rig testing of YAG-coated fuel-nozzle components (Fig. 1). Following rig testing, the nozzles were confirmed in good condition, and measurements of backside temperature demonstrated the insulating capability of the coating. 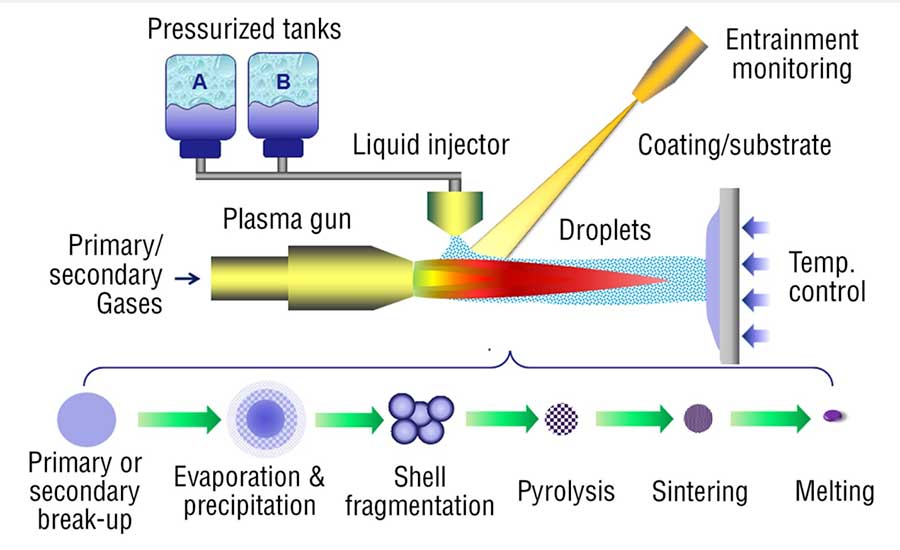 Fig. 6.  In the solution precursor plasma spray (SPPS) process, oxide coatings are deposited from a liquid precursor rather than from powder, which allows for greater control over microstructure compared to the standard air plasma spray (APS) process.

The SPPS process, illustrated schematically in Figure 6, is a modification of the APS deposition process, wherein a liquid precursor (an aqueous solution of metal salts) is injected into the plasma plume rather than a powder. The liquid undergoes a series of physical and chemical changes in the plasma and is deposited onto the surface as ultra-fine splats.

The SPPS process confers several advantages compared to the conventional APS process. For one, SPPS splats are two orders of magnitude smaller than APS splats. This increases the toughness of the TBC by avoiding large-scale splat boundaries.[¹ & ⁵] SPPS also allows for a high level of control over porosity and microstructure through adjustment of process parameters.

Leveraging these capabilities, the project team is developing novel coating microstructures that tailor and optimize performance for specific applications. Two components were selected for this optimization: a combustion liner and a turbine-blade outer air seal (tipshoe).

Application requirements for the combustion liner (Fig. 3) include a low thermal conductivity overall, strong resistance to erosion at the outer surface and strain tolerance near the metallic bondcoat to accommodate thermal-expansion mismatch. Given these requirements, a graded-porosity strategy was deployed (Fig. 4).

YAG with a high density was applied near the metallic bondcoat (to improve strain tolerance). The coating then transitioned into a porous region with IPBs (to minimize overall thermal conductivity). Finally, the outermost region transitioned back to a high density (to improve erosion resistance at the surface). Through-thickness cracking was also incorporated to provide strain tolerance.

Following validation of coating performance in laboratory testing, a full-size combustion liner was coated with YAG in the optimized microstructure. This application was the first large-scale component coated with this technology. Compared to the fuel-nozzle application, temperature control and application distance were significant challenges for this larger and more complex part. The YAG coating will be compared against the standard YSZ coating in an upcoming rig test and ultimately deployed in development engine testing.

YAG development has also been initiated for blade outer air-seal applications (Fig. 5). This application requires a porous outer layer for possible interaction with the rotating turbine blade; yet it must also be durable against erosion, corrosion and thermal stresses. Process and coating development are in progress to fabricate coatings for “rub-rig” testing that will simulate the application conditions.

Conclusion and Next Steps

With significantly higher-temperature phase stability than state-of-the-art YSZ, the emerging YAG system is a promising candidate as a next-generation TBC. Solar Turbines Inc. (in partnership with Solution Spray Technologies) is now scaling up the novel SPPS deposition technique to validate the performance of a YAG coating on gas-turbine components in both rig and engine testing.

The next step in the program will be to validate the performance of the optimized YAG coating on a full-scale combustion liner in a rig test. Successful demonstration will lead to a development engine test of a coated combustion liner. Process development will also continue for blade outer air-seal applications.

The highlighted project is an example of work funded under AMO’s technical focus area of Materials for Harsh Service Conditions. To learn more about AMO’s research portfolio in this and other technical areas, visit AMO’s website at https://energy.gov/eere/amo/advanced-manufacturing-office.

All images/graphics have been provided by the author.

Steve Sikirica is with U.S. Department of Energy; Washington, D.C.

Heather Liddell is with Energetics, Science and Technology Division of Washington, D.C.