Aerospace Material Specification 2750 (AMS 2750) is the main pyrometry specification that provides the requirements for the calibration and testing of thermal-processing equipment.

Once thought of as the specification for aerospace heat treaters and raw-material producers, AMS 2750 has now crossed over to various industries. Industries such as chemical processing and coatings, medical-device manufacturers, castings and forging are a few other than heat treating to adopt AMS 2750 as the standard to follow when it comes to testing thermal-processing equipment.

Many of the aerospace primes such as Boeing, Rolls-Royce, Pratt-Whitney, Bombardier and Lockheed Martin Aeronautics have adopted all or most of AMS 2750 as the standard for pyrometry. In 2017, the FDA’s Center for Device and Radiological Health formally recognized AMS 2750 for heat treating medical devices such as heart wires, metallic joint replacements, titanium staples and needles to name a few examples.

The team was formed with experts within the heat-treat industries covering thermocouples, pyrometry service providers, aerospace primes, Nadcap personnel and raw-material producers. The team had one goal in mind, and it was to clarify issues from the previous revision. We used such tools as the Pyrometry Reference Guide issued by PRI and Nadcap audit advisories related to pyrometry issues to correct flaws from previous revisions and to update the latest technologies in the thermal-processing industry.

When AMS 2750F was finally published in June 2020, the document expanded from 43 pages to 54 pages, added eight more definitions from 79 to 87 and created 14 new tables from 11 to 25. The additional tables and figures were created to provide clarifications of the requirements. For example, Table 10 was added to clarify the difference between analog and digital recording instruments, and Table 17 will guide users in the SAT Waiver relationship calculations. Again, our goal was to clarify issues that were misunderstood or interpreted incorrectly over the last five years.

AMS 2750 is broken down into sections for better flow for the document and per SAE guideline, which are as follows.

I will highlight some of the key changes within AMS 2750F by each section of the specification. The most glaring change will be that all the tables or figures are scattered throughout the document. Previous revisions listed all the tables in the back of the specification. This is a change mandated by SAE. Tables are now placed when first referenced within the body of the text.

Section 1: Scope of the Specification

As I mentioned earlier, this document has crossed over to various other industries and will eventually be added to the composite industry. Another key addition to the scope was paragraph 1.2, which allows this specification to be used in other non-heat-treating applications if specified. This was added to include industries such as chemical processors, coatings, welding, etc. to reference AMS 2750 for testing requirements of thermal-processing equipment.

New documents added to this section include IEC 60751 (Industrial Platinum Resistance Thermometers and Platinum Temperature Sensors) and ISO/IEC 17025 (General Requirements for the Competence of Testing and Calibration Laboratories). IEC 60751 was added to address the allowance of resistance temperature device (RTD) as a sensor allowed to be used in thermal-processing equipment. The reference to ISO/IEC 17025 will be discussed further along in the article under section 4.

There were additions, deletions and combining of definitions in AMS 2750, section 2.2. This was done to provide clarity as well as address requirements that were added or deleted from the specification. Some of the additional or modified definitions are:

Additional requirements and sensors were added to AMS 2750F. The biggest change is to the accuracy requirements for all base-metal temperature sensors that constitute controlling, recording, load, TUS and SAT sensors. They shall be ±2.0°F (±1.1°C) or ±0.4% of reading, whichever is greater. It was discussed with various thermocouple manufacturers around the world that most users of thermocouples in aerospace heat treating only purchased what is defined as special limits of error sensors. The requirements for noble-metal sensors – Type “R”, “S” & “B” – also require special limits of error. If the accuracies of Types “R,” “S” and “B” are not met, the correction factors shall be applied during thermal processing.

Several thermocouples and sensors were also added, such as: Types “M,” which is not an official designation by all international standard organizations for Nickel/Nickel-Molybdenum; Type “C,” Tungsten/Rhenium and RTDs; and Platinum Type Class A. These were added since they are being utilized in new thermal processing such as hot isostatic pressing (HIP).

A major change came to the reuse of expendable test sensor/load sensors. The sub-team provided data that showed certain base-metal thermocouples were subject to drifting over a smaller period than anticipated. Since these sensors were being used for testing and measuring part temperatures where time at temperatures is critical, restrictions were put into place as follows:

Field test instruments will now be required to have 0.1° resolution throughout the range of intended use. For example, a Fluke 53IIB cannot read a decimal place above 1000°F and will not be allowed for use as a test instrument if used above 1000°F.

Digital recording instruments shall also have a minimum readability of 0.1°, two years after the release of AMS 2750F. This was added to fix a flaw within AMS 2750. The calibration accuracies allowed for process instruments are ±2.0°F (±1.1°C) or ±0.2% of reading, whichever is greater. If the recording instrumentation does not have 0.1° readability, the supplier would not be able to show compliance to either the percentage of reading or if they were processing materials in Celsius.

For example, if a calibration point is 1200°F, the accuracy allowed is ±2°F or ±0.2% of reading, which allows for the instrument to be within ±2.4°F. If the recording instrument does not have 0.1° readability, compliance could not be established. This new requirement is only for digital recording instruments. Analog recorders will be phased out two years after the release of AMS 2750, requiring digitally recorded readings.

Section 3.2.6 addresses the use of offsets for thermal-processing equipment. The offsets were divided into two categories: correction offsets and modification offsets. Either of these offsets can be utilized, but the suppliers will need robust procedures addressing the implementation of these offsets.

Correction offsets are defined as: “Manual or electronic adjustment to an instrument made to compensate for known errors of the measurement system to make the system more accurate.” Modification Offset is defined as a “Manual or electronic adjustment of an instrument to compensate for known conditions such as, but not limited to, a skewed TUS or control thermocouple location placement in a retort or muffle.” 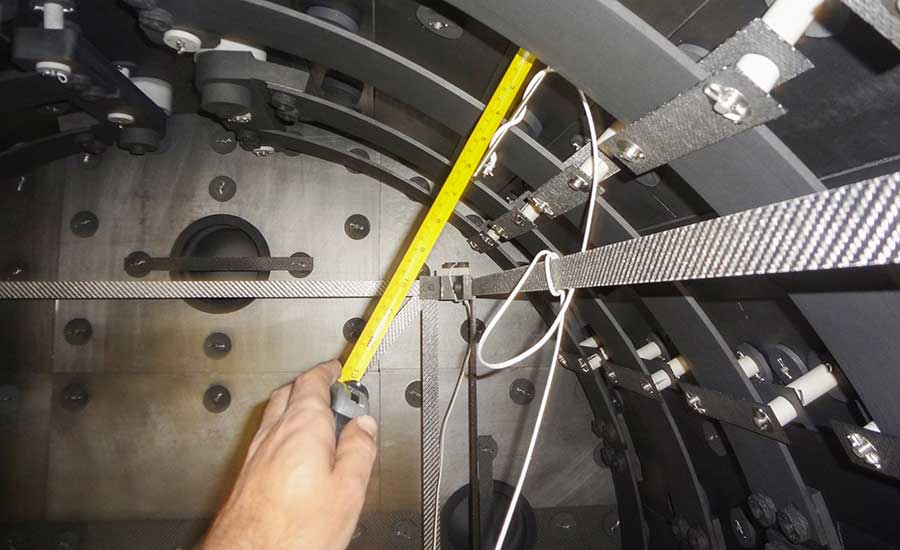 The revisions for system accuracy test (SAT) include addressing systems that control and record from the same measurement circuit and equipment with multiple qualified operating ranges as well as more clearly defining comparison SAT, alternate SAT and the SAT waiver processes (Fig. 1).

When conducting an SAT on a control and recording system that is coming from the same measuring circuit, such as a PLC-based system, the supplier will only be required to document a single displayed/recorded reading for the SAT records. This added clarification came from a Nadcap Audit Advisory from the previous revision of AMS 2750.

For thermal-processing equipment that may have more than one qualified operating range, there is a new requirement that a periodic SAT must be conducted in each range at least annually and that the frequency for the SATs shall be at the most stringent interval for the furnace class used.

Much needed clarification was added to the alternate SAT process and is now defined for load sensors used once or for other control and recording sensors replaced at the same or less than the SAT intervals. There are three options allowed for the alternate SAT, which include the following.

The last major section for testing requirements in pyrometry is temperature uniformity surveys (TUS). Changes were addressed that covered modifications and/or repairs that would trigger a TUS, vacuum pressure levels during a TUS for vacuum furnaces, location of test thermocouples when the working volume is less than 3 cubic feet and updated criteria for conducting radiation test surveys.

As with all modifications or repairs to thermal-processing equipment, these events should be documented and reviewed by quality personnel if a pyrometry test (calibration, SAT, TUS) should be conducted depending on what maintenance was performed on the equipment. For example, one item that was addressed was the portability of thermal-processing equipment. There are ovens and even vacuum furnaces designed with wheels to be portable for cellular manufacturing. It will be incumbent on the quality personnel to determine if a TUS will need to be conducted if equipment is moved that is designed to be portable. 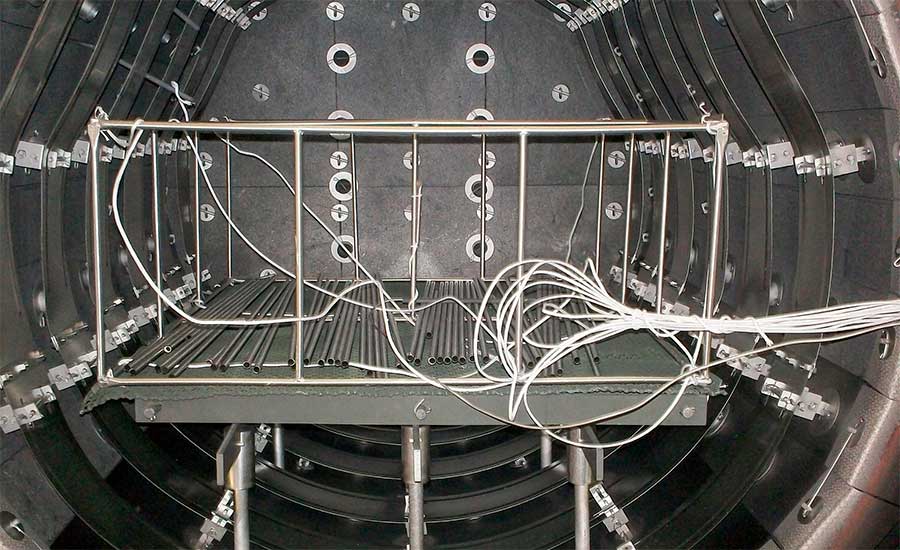 There is a new requirement for temperature uniformity surveys to be conducted on vacuum furnaces (Fig. 2). For vacuum furnaces operated under partial pressure during production, a periodic TUS shall be conducted at least annually at one single operating temperature and within the partial-pressure range used during production. This is not an additional survey to the regular TUS schedule, but one that needs to be conducted with the above parameters. The supplier will be able to choose at what temperature this test is conducted, as well as the backfill gas and partial-pressure setting. 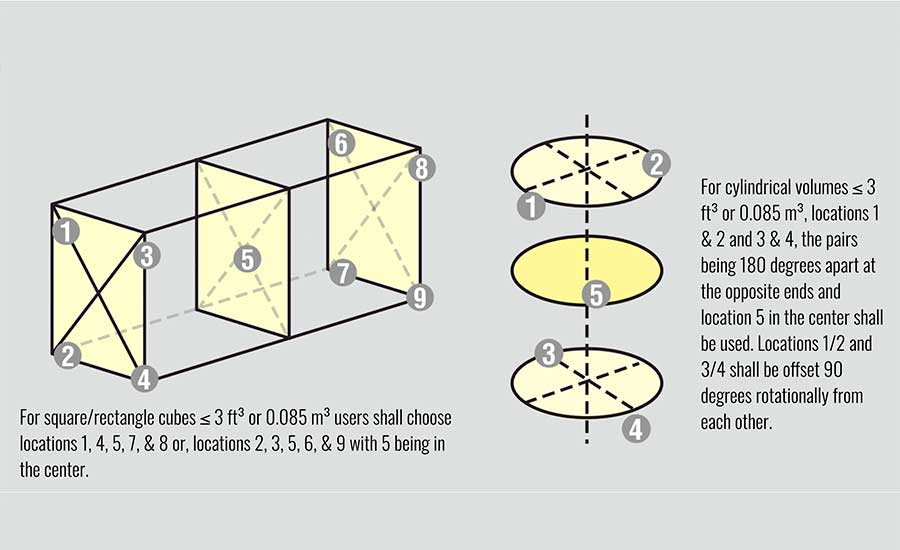 The location of test sensors for working volumes less than 3 cubic feet was addressed. Previous interpretation allowed the user to place five test sensors along the central plane of the thermal-processing equipment. This method was lacking in covering the overall work-down dimension. The new requirement per AMS 2750F for box-shaped and cylindrical-shaped furnaces is shown in Figure 3. 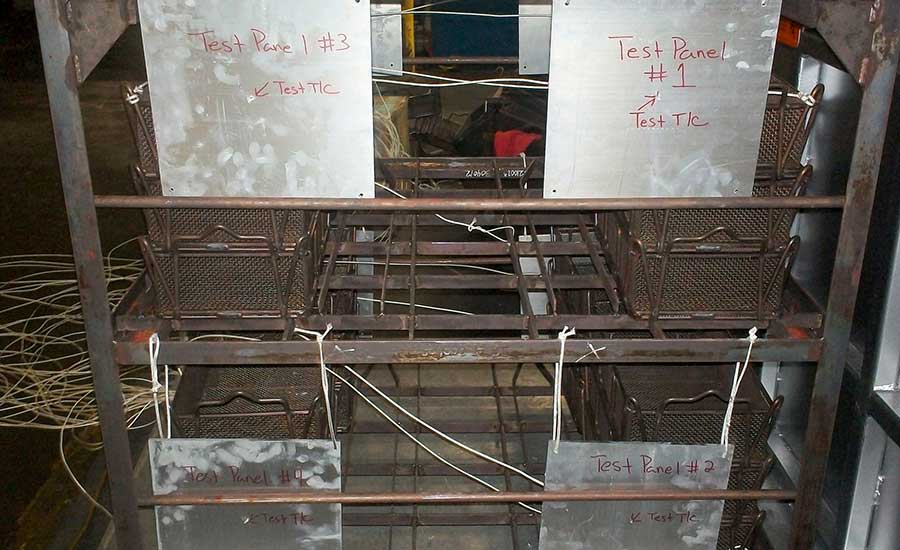 Radiation test surveys (Fig. 4) were previously only required for aluminum solution heat treatment when the heating source was along the walls, floor or ceiling. The requirement has now changed for all aluminum-alloy thermal-processing equipment used above 800°F (427°C). This will be required for aluminum vacuum brazing furnaces. The testing shall be performed at the maximum operating temperature used for production.

There was a slight change to the requirements of rounding in AMS 2750F. Previous revisions only allowed rounding per ASTM E-29 or other internationally recognized standards, such as ISO-80001, rule B. Those requirements caused problems early on, especially for those who rounded to ASTM E-29, which, simply put, did not like odd numbers. The new requirements allow both the above-mentioned standards as well as any commercial spreadsheet that rounds the way we were all taught in grade school – if it ends in 0.15°F, round up to the next significant digit of 0.2°F.

AMS 2750F is a comprehensive document covering all aspects of pyrometry related to thermal-processing equipment. This article is not intended to cover every change within the document. It simply highlights some of the major changes within each section of the specification.

Andrew Bassett is with Aerospace Testing and Pyrometry; Bangor, Pa.
You must login or register in order to post a comment.