This website requires certain cookies to work and uses other cookies to help you have the best experience. By visiting this website, certain cookies have already been set, which you may delete and block. By closing this message or continuing to use our site, you agree to the use of cookies. Visit our updated privacy and cookie policy to learn more.
Home » Making the Most of Muffle Tube Selection
Heat & Corrosion Resistant Materials
HEAT & CORROSION RESISTANT MATERIALS/COMPOSITES

Making the Most of Muffle Tube Selection

Muffle furnaces are often used in wire-drawing mills for annealing and for the production of razor blades and Bundy tubes. The muffle tubes inside such furnaces protect the product during heat treatment and create conditions for more-even temperature distribution.

In most cases, a protective shielding gas such as hydrogen, nitrogen, cracked ammonia or endogas is fed into the muffle tube. Some of these gases can be corrosive and will shorten the life of the tubes significantly. Furthermore, the temperature is usually 800-1120°C (1472-2048°F) in the annealing furnaces, which can also shorten the life of muffle tubes.

During the drawing operation, the cross section of a long rod or wire is reduced or changed by pulling it through a drawing die. This can also be applied to small-diameter stock to reach wire sizes down to 0.03 mm. Drawing is a cold-working process, which allows the creation of products with:

The stock must be properly prepared prior to drawing. This can be done through annealing, cleaning and pointing.

Annealing increases the ductility of the stock to accept deformation during drawing and is sometimes needed between steps in continuous drawing. Cleaning the stock is required to prevent damage to the work surface and draw die. This involves the removal of surface contaminants (such as scale and rust) through chemical pickling or shot blasting.

In some cases, pre-lubrication of the work surface is required after cleaning. Pointing involves the diameter reduction of the starting end of the stock so that it can be inserted through the draw die to begin the process. This is usually accomplished by swaging, rolling or turning. The pointed end of the stock is then gripped by the carriage jaws or another device to initiate the drawing process.

Various other surface defects (such as scratches and die marks) can result from the improper selection of process parameters, poor lubrication or poor die condition. Because they undergo non-uniform deformation during drawing, cold-drawn products usually have residual stresses.

Annealing is a heat-treatment process that alters the physical and sometimes chemical properties of a material to increase its ductility and reduce hardness, making it more workable. It consists of heating a material to above its recrystallization temperature; maintaining a suitable temperature; and cooling using air, water, oil or salt. Three stages in the annealing process occur as the temperature of the material is increased: recovery, recrystallization and grain growth.

Recovery results in a softening of the metal through the removal of primarily linear defects, or dislocations, and the internal stresses they cause. Recovery occurs at the lower-temperature stage of all annealing processes and before the appearance of new strain-free grains. The grain size and shape do not change. In recrystallization, new strain-free grains nucleate and grow to replace those deformed by internal stresses. If annealing is allowed to continue once recrystallization has completed, then grain growth occurs. In grain growth, the microstructure starts to coarsen and may cause the metal to lose a substantial part of its original strength. However, this can be regained with hardening.

The high temperature of annealing may result in oxidation of the metal’s surface, resulting in scale. Annealing is carried out in a special atmosphere, such as with an endothermic gas (a mixture of carbon monoxide, hydrogen and nitrogen gas), if scale must be avoided. Annealing is also carried out in a forming gas, which is a mixture of hydrogen and nitrogen.

Continuous-annealing furnaces are designed for years of trouble-free service in the processing of wire, rod, strand, strip and tube products. These furnaces are ideally suited for copper, copper alloy, nickel, nickel chrome, titanium, stainless steel and refractory metals. Different temperature ranges are offered to cover a wide variety of applications.

Bundy tube, sometimes called Bundy pipe, is a double-walled, low-carbon steel tube manufactured by rolling a copper-coated steel strip through 720°F and resistance-brazing the overlapped seam in a process called Bundy welding. It has been used in hydraulic brake lines in cars manufactured in the U.S. since the 1930s.

Sandvik has a strong track record of delivering materials to some of the most demanding industries and customers in the world. The company produces different types of high-temperature-resistance alloys that can withstand all kinds of shielding gases and environments up to 1200°C. 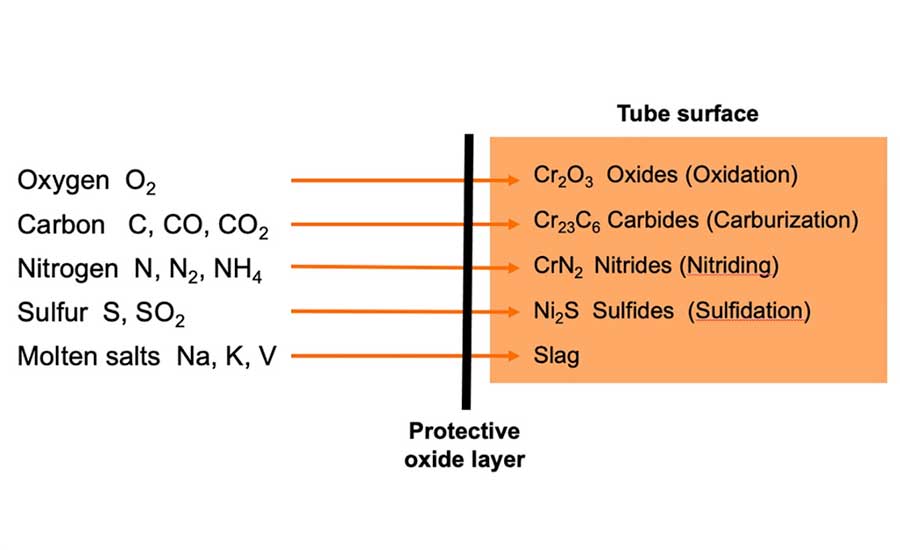 Sandvik muffle tubes are manufactured in a wide range of stainless steels – each one with some peculiarities based on the specifics of its composition. Typical of every stainless steel is a protective oxide surface layer of Cr₂O₃ (chromium oxide). At room temperature, this provides a sufficient barrier for diffusion of gases and protects the tubes from corrosion. At temperatures higher than 500°C, however, a diffusion mechanism starts allowing the gases to penetrate into the metal structure and start bonding with some of the beneficial elements of the grade (Fig. 1).

Oxygen, carbon and nitrogen compounds tend to bond with chromium but deplete the protective Cr-oxide layer. Sulfur easily joins to nickel, so it is preferable to use a material with almost no nickel, such as a ferritic grade, in cases of sulfidation risk. 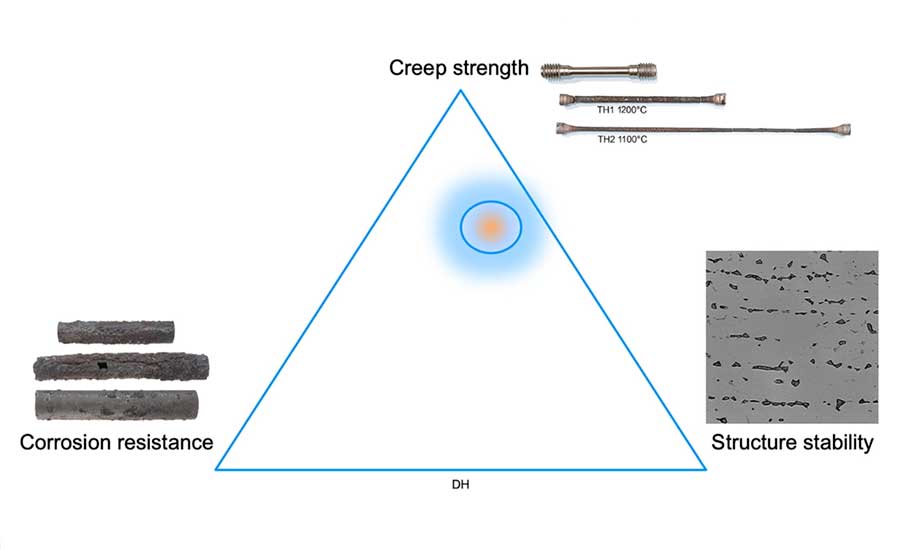 When choosing a material that is able to resist at high temperature in corrosive atmosphere, three factors must be considered: corrosion resistance, structural stability and creep strength (Fig. 2).

The main atmospheres found in muffle furnaces are:

In each case, it is important to select the best grade in order to fulfill the requested performance.

Cracked ammonia is one of the most aggressive environments in this application. It causes rapid nitriding of the tube material, which leads to a loss of mechanical strength. By selecting an alloy with higher nickel content, it is possible to extend service life.

Nitrogen seems to be a less-severe environment than cracked ammonia. The endogas will cause rapid carburization, which also reduces the muffle tube’s mechanical strength. Hydrogen is a less-aggressive environment. 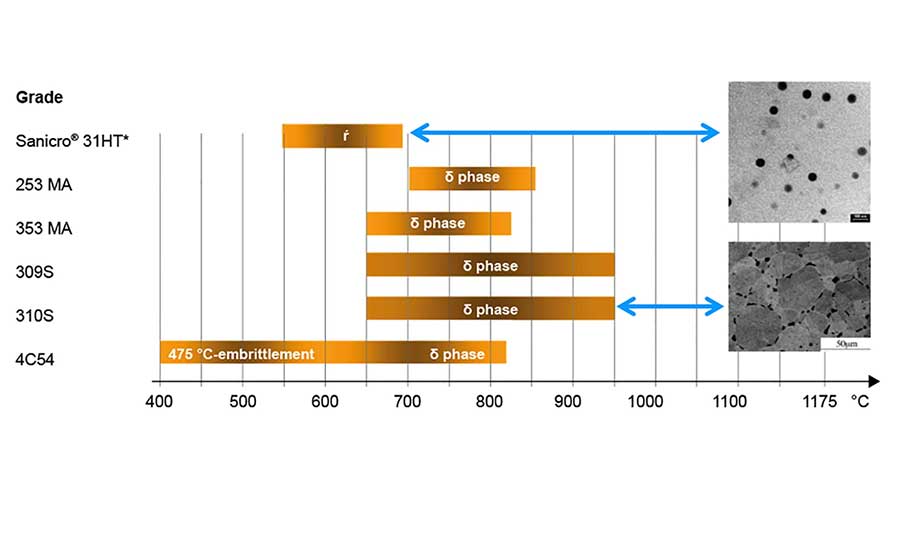 High-temperature materials have been designed to work at high temperatures, but there are some ranges that should be avoided since they can lead to the precipitation/formation of some harmful intermetallic and fragile phases (Fig. 3). 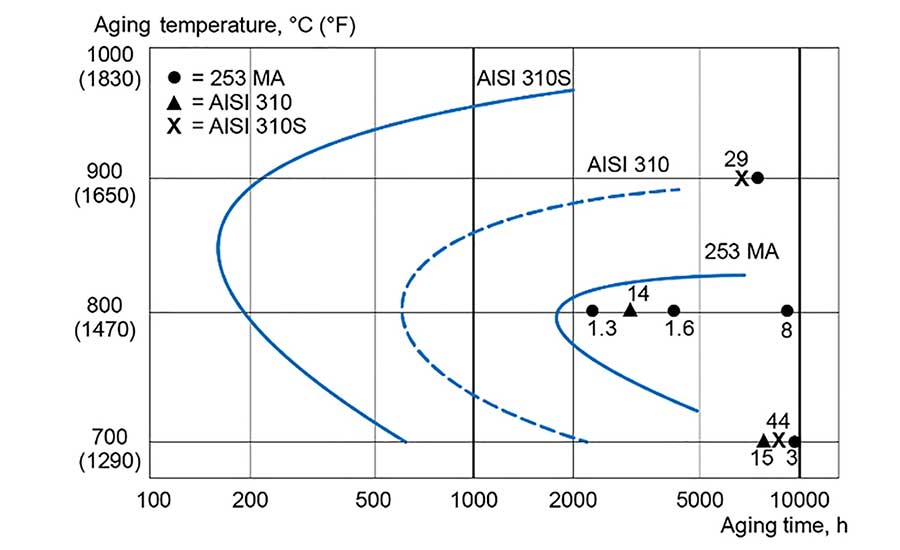 For example, Sanicro® 31HT can form the gamma-prime phase while the others form the well-known brittle sigma phase. Sandvik 4C54 can experience challenges due to the phenomena of 475°C embrittlement in the ferritic phase. The formation of these phases happens with different velocities/kinetics based on the material as shown in the TTT (time, temperature and transformation) diagram (Fig. 4). 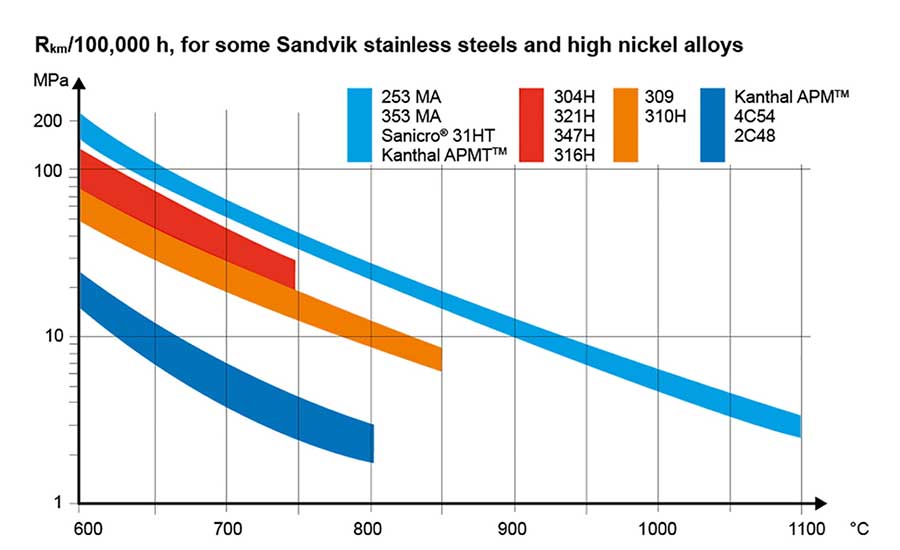 Creep strength is important in case there is the risk of deformation of the material at high temperature. Some tests are shown in Figure 5. As can be seen, the ferritic grade is less resistant to creep, while Sanicro® 31HT and the MA grades display better performance.

Muffle tubes are used to shield a product from the environment of the furnace during heat treatment and to create conditions for a more-even temperature distribution. In most cases, a protective gas is fed into the tube. Some of these gases are very aggressive and could shorten the life of the muffle tubes significantly.

The temperature can reach above 1200°C in some annealing furnaces, but temperatures of 800-1120°C are most common. These high temperatures often result in a short service life, leading to frequent stoppages for maintenance and muffle-tube replacements. Because the value of lost production is high, the decision to select a better grade of tube material will be beneficial in the long term.

Sandvik has created a range of products than can improve muffle-tube performance. The company’s Sanicro® 31HT is often used in environments with cracked ammonia, which is one of the most aggressive environments in this application. It causes rapid nitriding of the tube material, which leads to a loss of mechanical strength. By selecting an alloy with higher nickel content (like Sandvik 353Ma or Sandvik® 61), service life can be extended.

Sanicro 31HT is a suitable material where pure nitrogen or a mixture of nitrogen and hydrogen is used. Nitrogen can be a less-severe environment than cracked ammonia. The endogas will cause rapid carburization, which also reduces the muffle tube’s mechanical strength. Sandvik 353 MA is the most cost-effective material in these conditions. Hydrogen is a less-aggressive environment. In these conditions, the most cost-effective material is Sandvik 253 MA, followed by Sanicro 31HT.

Sandvik 4C54 is a cost-effective choice for annealing of carbon steel because it is carried out in a lower temperature range.

Certain operational conditions will shorten the service life of muffle tubes. Residuals, such as hydrocarbons, soap or drawing powder, can increase the risk of corrosion. Frequent temperature cycling will also shorten the service life. If premature failures happen, a careful analysis of the process is recommended. This may result in the selection of a more suitable material optimized for your special conditions.

All images/graphics provided by Sandvik.

Getting the Most Out of Your Combustion System

RA 602 CA®: An Alloy for the Most Extreme Temperatures

Steel Metallurgy for the Non-Metallurgist