In this installment of articles on heat treating common, everyday items, we take a look at some of the tools we use, how we use them and how they are heat treated. We begin with hammers.

While not his first invention, the hammer – and in particular the hammer head – has helped man expand his universe like no other invention until the advent of the personal computer. Through the centuries, the hammer head has kept up with the times, evolving from the Stone Age to the Bronze Age to the Iron Age and through the Industrial Revolution (the Steel Age). Without heat treating, however, today’s hammer head would be no more useful as a tool than hammers made of stone. 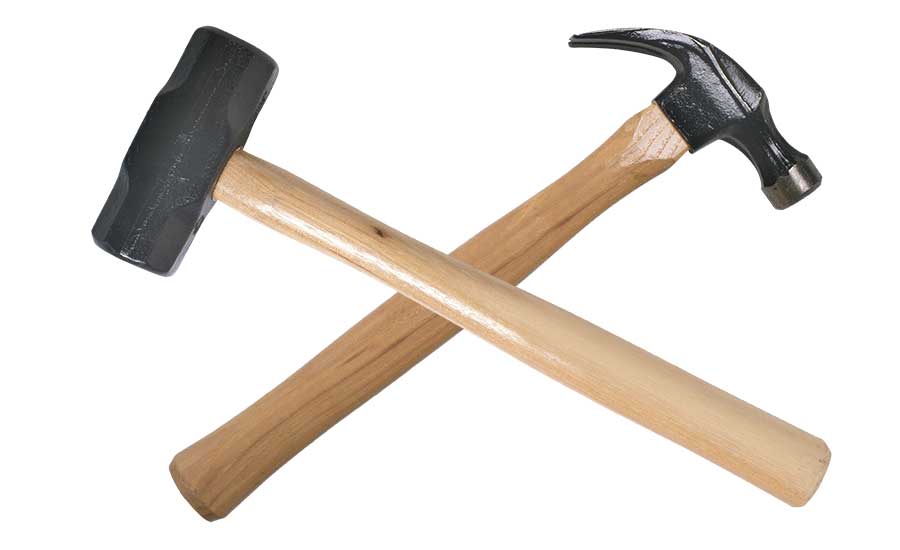 Blacksmiths needed hammers to do their jobs and were the first to put iron hammer heads into charcoal fire boxes until they reached an even cherry-red glow and, while still red hot, immersed them in barrels of water. Later, they found that oil produced a better-performing and longer-lasting hammer. However, early hammer designs were only concerned with the mass and general shape of the hammer head. The modern hammer is highly developed and pays careful attention to a great many factors, including the location of the hammer’s center or gravity, configuration and the type of heat treatment.

Many steel hammer heads rely on a hot-forging process in combination with precisely controlled tempering to produce a durable, high-performing product. The most important part of the manufacturing process is controlling the degree of hardness of the head. Most U.S.-made hammer heads are manufactured from either high-carbon or high-alloy tool steels. Brass-, bronze- and copper-faced hammers are also popular. Less-expensive hammers can be produced from cast steel but are generally not as durable.

Heat Treating is the Key

Hardness is the most essential factor in determining hammer life. While the head must be extremely hard and resistant to wear, the shank must be more ductile in order to absorb shock. In the manufacture of crusher hammers, for example, selective induction hardening is used to create a gradually varying hardness between the shank and the tip while avoiding abrupt hardness changes.

In cross section, the hardness extends for the full depth instead of merely at the surface. Hammer hardness, in this case, is normally measured by Brinell testing. If it is too hard, it becomes brittle and chips easily. Also, the eye of the hammer needs to be strong rather than hard. As such, the eye is normally softer. Nonferrous hammer heads are solution treated, quenched and age hardened. Stress relief and annealing are also done depending on the end-use application. 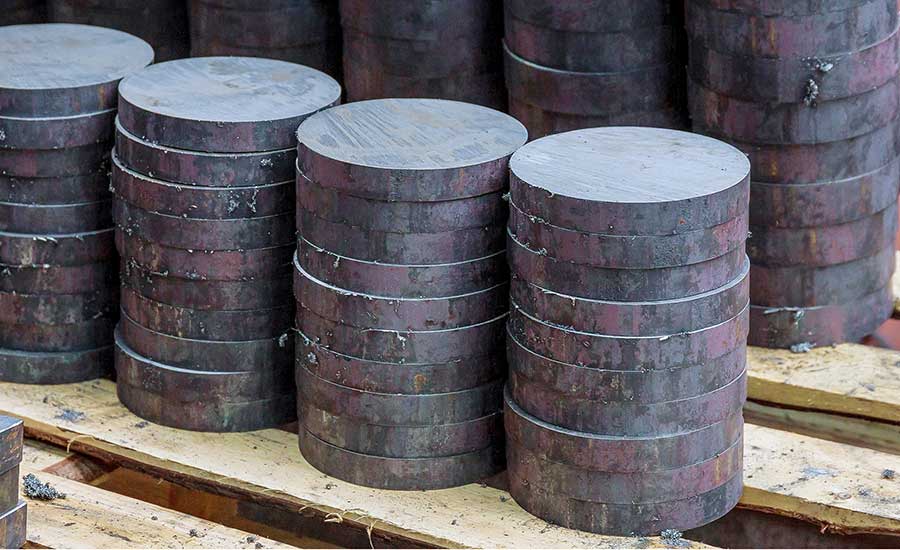 If you thought there were only a couple of styles of hammer heads, think again. One major U.S. hammer manufacturer produces more than 250 types, sizes and materials for every conceivable trade and task.

The most popular hammer for general work is the claw hammer, which is available in weights from 16 to 24 ounces (455-680 grams). The claw is normally curved, and it incorporates a “V” cutout to draw nails from timber. The next-most-popular hammer for general use is the ball-peen hammer, which is used to round or shape metal and for closing rivets. Ball-peen hammers are available up to 2 pounds (907 grams), with 8 to 12 ounces (227-340 grams) being the most common for general use.

The club hammer or baby sledge weighs 2.5 pounds (1,134 grams), has a double-faced head and is useful for light demolition work and driving steel chisels and masonry nails. For heavier jobs, such as driving in stakes or breaking up concrete, a sledge hammer with a weight of 7-14 pounds (3,175-6,350 grams) is often needed.

The hammers of tomorrow may involve more sophisticated materials, but heat treatment will always have a role. 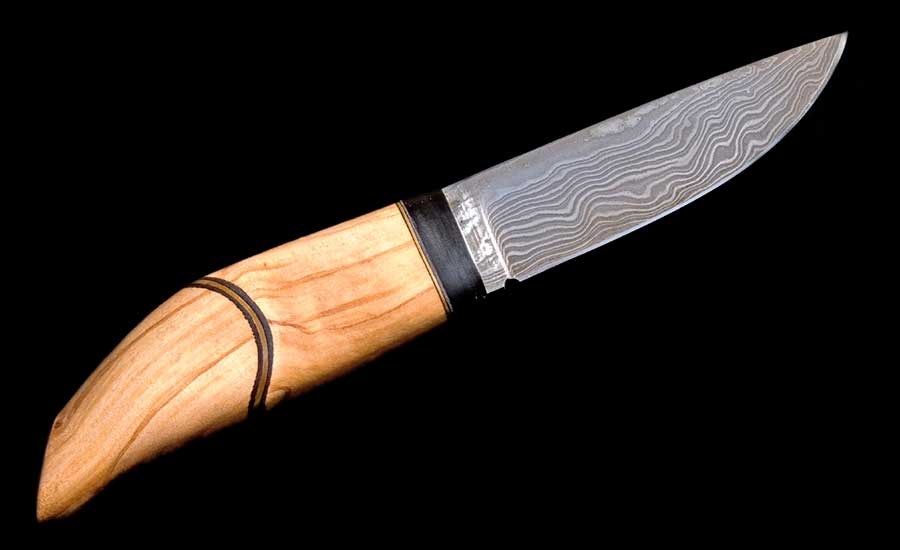 What would we do without knives? Knives – from the kitchen variety to utility to hunting – are a part of our daily lives. The word knife comes from the Middle English (450-1150 A.D.) word knif and knyf from the Anglo-Saxon word cnif. Regardless of its intended use, a knife would not be able to do its job if not for proper heat treatment.

Two things are key in making a good-quality knife blade: steel and heat treatment. Knife blades need to be made from high-carbon steel with about 0.85% C, which provides the best combination of final heat-treated hardness and carbide precipitation. Higher final hardness is necessary for edge retention, and carbides also help resist dulling of the edge. Adding other alloying elements – such as chrome, molybdenum, tungsten and vanadium – improves the hardenability of the steel, provides refinement of the grain size and produces alloy carbides that are more beneficial to edge retention.

Proper heat treatment of a blade involves more than hardening. It begins with annealing to remove the stresses induced during forging and to make it easier to shape the blade by cutting and grinding. Normalizing reduces the stresses induced during this shaping process while also reducing the grain size of the steel. Heat treatment is the process of hardening the blade to maximum hardness and then tempering to the optimal hardness, which is usually   RC 58-60. Depending on the alloy, a sub-zero treatment may also be used as part of the initial quenching cycle in order to fully transform the steel to attain maximum hardness.

For those who are familiar with the art of blade manufacture, Damascus steel is sure to be discussed. Blades made from Damascus steel exhibit an attractive random swirled pattern known as damascene. Although these unique blades were forged by bladesmiths in Damascus, Syria, the steel was actually made in India as early as 300 B.C. 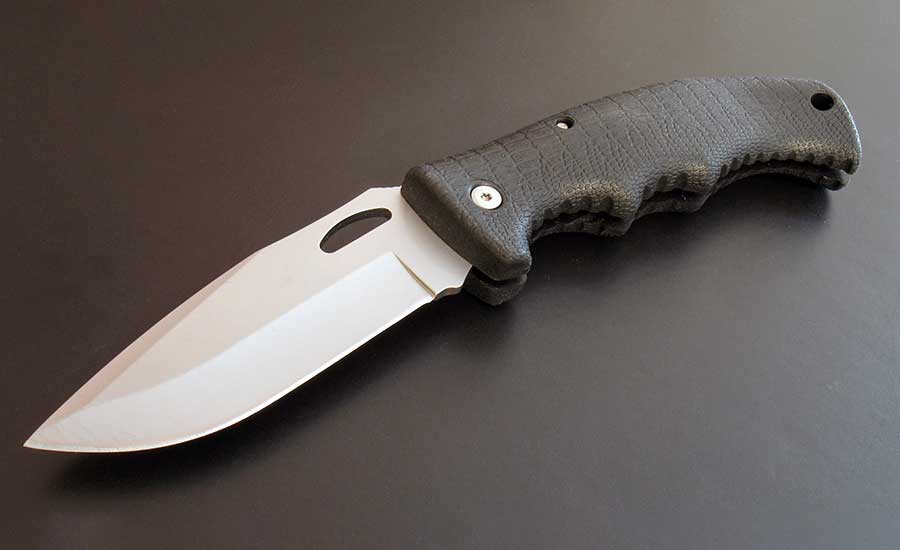 Unfortunately, this is a lost art. The date of the last blades made with the highest quality damascene patterns is probably around 1750. Blacksmiths of today use pattern-welding techniques to reproduce the look of Damascus steel. Pattern welding involves welding different types of steel and iron bars together to form a billet. The billet is drawn out and folded several times during the forging process.

Believe it or not, if you start with a single bar and fold it 16 times, you will end up with 65,536 layers. If, however, you start with a pattern-welded, eight-layer billet, 17 folds will result in 1,048,576 layers! The resulting layers will be aligned parallel to the forging direction, producing superior strength properties as well as a pattern similar to the Damascus patterns of old.

The keys to the success of this ancient process were the steel, which was relatively high-purity iron with 1.5% carbon, and the unique forging process. The carbon content of these steels results in bands of Fe₃C (cementite) with a characteristic spacing. These bands lie parallel to the forging plane of the blade, and the bladesmith can exploit this characteristic to produce a more exotic pattern upon polishing and etching of the blade.

If your interest is piqued and you have a desire to explore the knife-making art at a greater depth, there are a variety of resources on the web to get you started. Remember that once you have the right steel, the key to it all is the right heat treatment. You won’t be cutting much more than butter if your heat treatment doesn’t cut muster. 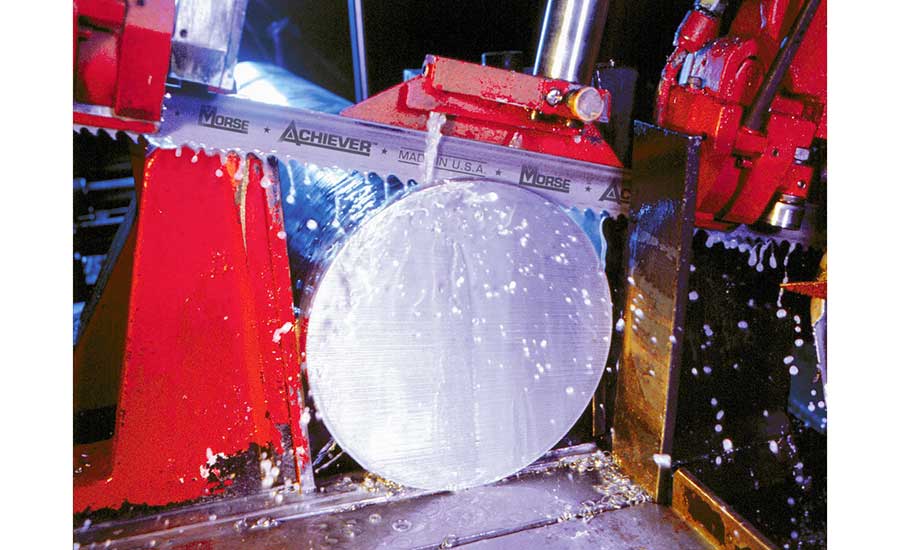 Consider the simple saw. In fact, saws may not be as simple as they seem. There are a variety of different types of saws used for various functions. The basic categories are handsaws and mechanically powered saws.

Handsaws fall into three types based on how they hold the blade stiff. Basic handsaws use either a blade thick enough to be stiff, or they cut on the pull stroke, which reduces the stiffness requirement. The types include crosscut, rip, floorboard, Japanese, keyhole and two-man.

Backsaws are a second category of handsaw that keep a thinner blade stiff by reinforcing it with a steel or brass back. The most common in this category are the miter, carcase, tenon and dovetail saws. The third category of handsaws stiffen the blade by placing it in tension, hence the name tension saws. Four tension saws are most common, and they are the bow saw, hacksaw, bucksaw and coping saw.

Mechanically powered saws are the second major category, and they are categorized by how they move the teeth past the product to be cut. The circular blade saws are circular, table, cabinet, radial arm, rotary and chop. The reciprocating blade saws are the jigsaw, reciprocating and scroll. The final type is the continuous band saw, and these are the band saw and the chain saw. 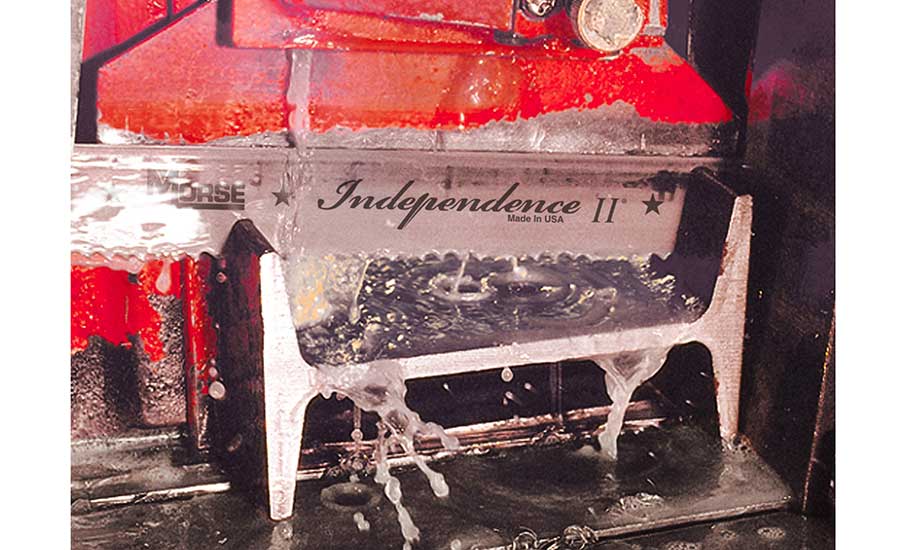 Having now finished reviewing the basic types of saws, it is important to understand the influence heat treatment plays. When we examine this, we find that there are almost as many heat-treatment variations as there are types of saws.

The basic saw blade is manufactured from carbon steel, and the teeth are hardened by flame hardening or induction while the blade back remains flexible. These types of blades are generally used for cutting wood or soft metals.

A second blade type is made from high-carbon alloy steel, and the entire blade is hardened and tempered. This is sometimes followed by a second hardening process of the teeth alone. A third type is called bi-metal, and it is produced by joining a high-speed steel cutting edge to a tough, flexible, carbon-alloy steel back for fatigue resistance and durability.

Many of the saws used by those of us in the metalworking industry (band saws, reciprocating saws, hacksaws and hole saws) are the bi-metal type, so it would be of interest to examine the manufacturing process for these blades. A high-speed edge wire and backing strip are joined by electron-beam or laser welding. This process is performed on coil stock. Following welding, the coil is annealed to soften and relieve stress.

The coil then proceeds to a rolling operation where the weld is flattened and the material is rolled to the proper thickness. Next, the teeth are formed by milling or grinding, and they are then “set” to get the required relief angles for the most-effective cutting. The blade, still in coil form, proceeds to heat treatment in strip furnaces, where it is typically hardened at 1900-2200°F in a protective atmosphere, followed by multiple tempers. Tempers are performed as coil. The resultant tooth-tip hardness is typically 66-69 RC, while the backing steel is 42-50 RC.

The final step in the process is putting the blade into its usable form. This happens by stamping to the final shape for hacksaws and reciprocating saws. Band saws are cut to length and flash butt-welded followed by a localized grind and anneal.

After considering the saw, it is not at all simple. The heat treatment varies as much as the variety of saws. 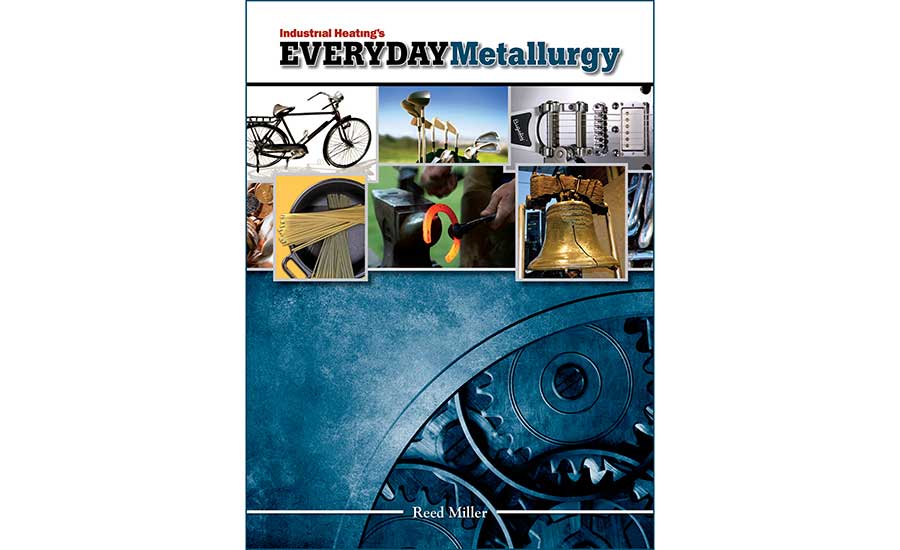 We hope you enjoyed this look at several implements and the thermal processing needed to make them into useful and functional tools. If you want to read more about the heat treatment of everyday items, pick up a copy of Everyday Metallurgy in our bookstore.

If you would like to learn more about the metallurgy and heat treatment of everyday items on a regular basis, we initiated a blog in 2021 to review interesting thermal-processing facts. New blogs will be added once or twice each month. You can find it here.

Another interesting piece containing similar information is “The History of Industrial Heating.” This timeline covers thermal processing history from 1000 BC to the present day. Take a stroll though history by checking out this link.