Failure Analysis for our Times: Fracture of a Punch with Confusing Features

Tooling failure analysis can be very challenging. Frequently, we have to deal with complex loading and multiple simultaneous damage processes. Because the tools are so hard, fracture surface features are often very faint. The clues we get from our visual inspection, always one of the key early steps in a failure analysis, are thus often suggestive rather than compelling. They hint at a damage sequence rather than definitively revealing one.

The pictured cylindrical object, the lower portion of a punch from a stamping press, broke off during production stamping at a deep-draw house. The mating fragment was not provided and neither was a print, so I might have a clue about any lubrication holes present or other features that might locally increase the stress. The cup-shaped piece at the bottom, the workpiece that was eventually to be sold to my client’s customer, has been squeezed from two mutually perpendicular directions (which was probably not intentional) and has resulted in an asymmetric part.

What can we tell from what we see here?

1. Figure 1 shows fairly distinct curved lines on the fracture surface, highlighted by the rows of red arrows. These series of concentric arcs are known as beach marks. They indicate fatigue, or progressive crack growth. Once the crack initiates, it may grow a little more each time the press forces the punch into a workpiece or each time the workpiece is stripped from the punch in preparation for the next hit. Beach marks indicate the position and shape of the crack tip at some specific point in time prior to complete fragmentation. The uniformity of the color is consistent with the uniformity of the force of the punch and the environment in which it was used as it is pushed into the flat blank to create the cup.

Sadly, the general area from which the crack seems to be spreading, shown by the black x at the top of the left image, is missing. That means that there is no way to confirm or disprove that there was a reason for the crack to have initiated in the suspect position.

2. Now look at the image on the right side of Figure 1. It gives us a clearer view of the shape of the crack. The black arrows highlight the “swoop” profile, where the crack is almost transverse (perpendicular to the cylindrical axis) at the left and virtually parallel to the axis on the right. The classical swoop-shaped crack is created in wrought materials by a bending load, initiating in a transverse orientation at a corrosion pit, a wear mark, a scratch or simply the highest stress location due to design.

As the crack propagates deeper into the load-bearing cross section, the crack eventually finds it easier to grow along the “fiber” of the material (similar to what we see when splitting wooden logs). Eventually, the crack turns 90 degrees. So, could this crack actually have started on the cylindrical surface at the lower (blue) x? Axial compression of tall, skinny columns creates bending, so this is not completely impossible. (See Euler’s Buckling on Wikipedia: https://en.wikipedia.org/wiki/Buckling.) Is there anything else we can see that can help us decide? 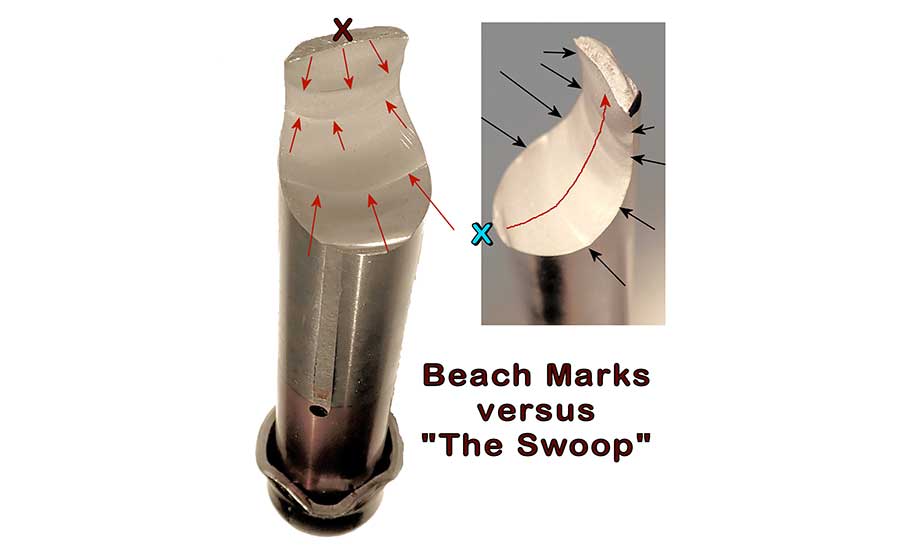 Detailed inspection of the upper portion of the crack (Figure 2, rotated to an orientation about halfway between the left and right views of Figure 1) revealed a ridge pattern with finer steps merging to coarser ones from bottom to top (equivalent to left to right on Figure 1). This would indicate crack growth opposite of the beach-mark theory and in line with the swoop theory. I kept looking, despite having concluded that this portion of the crack was due to a separate loading event. It was probably the last portion to separate and unrelated to either the beach marks or the swoop!

Zooming in on the features at the 6 o’clock position of the left side of Figure 1, we have the bottom view of Figure 2. This ridge pattern shows a crack-growth direction consistent with the beach marks, not the swoop. This tells us that the beach marks and the lower step are all likely part of the main crack.

We have not investigated the tooling material quality or the quality of the heat treating. We have not tested for the presence of grinding burn. We don’t know if there was a lubrication failure. Was there something stuck on the end of the punch that increased the bending forces over time? The overall smoothness of the crack indicates that it took some time to propagate. 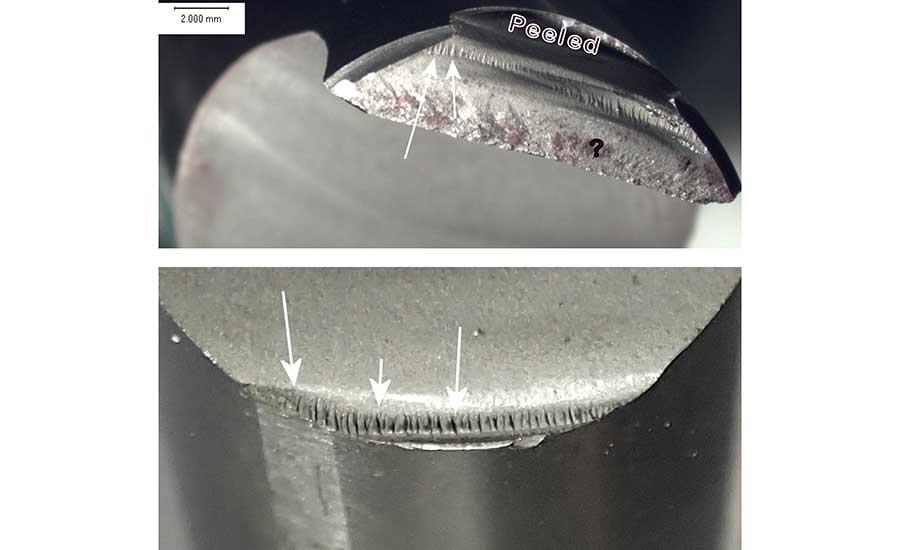 Fig. 2.  Arrows show direction of crack growth based on increasing step height as the crack grows toward the part surface.

The uncertainty remaining in my analysis, a permanent condition, results from the missing beach-mark initiation area. This mini fracture analysis fits right in with the general atmosphere of 2020, blanketed by the trauma and uncertainty associated with COVID-19.

Perhaps it’s a bad idea for a failure-analysis expert to admit uncertainty, but sometimes that is the most honest action we can take. In addition, one of the great techniques to increase our creative skills is learning to tolerate uncertainty. If we don’t think we already have the answer, we have a greater chance of recognizing either the answer itself – or the next hint on the path toward figuring it out – should it show up at a later time.