Commercial and captive heat-treat facilities have significant capital investments in their equipment, particularly in fixtures and fabrications. Many shops have made investments in alloys that have improved life from two years to four years.

Over the past few decades, significant strides have been made to increase the life cycle of components that are to be used at high temperatures. Today, there are new alloys that can result in another doubling (or more) of the component life at far less the doubling of cost. However, many shops indicate that eight years is a long time to wait to realize all the savings. Often overlooked is the increased revenue that can be realized from each week of downtime that can be eliminated by the increased life of the better alloy. This added revenue can be much more than the cost savings in material from the doubling of component life. There are two more concepts worthy of consideration.

The ultrahigh-creep-strength castings of today are sufficient to keep them straight for much longer periods of time than most wrought alloys. However, their ductility is low. As a result, these castings will fracture from rupture rather than deforming from creep like wrought alloys. The time to rupture is sufficient to justify the cost of the casting. Once again, with some of the better and/or newer wrought alloys, the improvements to creep strength and therefore usable life are sufficient to consider their use on a cost basis.

Furnace BTU efficiency is rarely considered as it relates to fixturing. The current practice in many facilities is to use cast grids because they do not deform, even when subjected to daily liquid quenchings. When flatness tolerances are very tight, this approach makes sense and no change is in order. Conversely, there are facilities that do not have these very strict straightness requirements and where the slight deformation of parts sitting on a wrought grid will still meet straightness requirements. These wrought assemblies can be significantly lighter than castings. Every furnace has a rated capacity in pounds. Heavier fixtures require more energy to bring them to temperature. That means less of the total energy used in each load is being used to heat revenue-producing parts.

By designing lighter fixtures that can hold more parts, more of the energy used per batch is going into parts. This should lower unit costs of heat treating, thereby increasing revenue. Even if fixture life is shorter, these wrought grids may turn out to be more cost-efficient due to the better utilization of energy.

Several individual real scenarios will be examined along with real economic considerations, some of which are too often ignored in the decision-making process.

These tubes are working in an atmosphere of endothermic gas, a process temperature of 1750°F and a carbon potential that can vary between 1.2 and 1.6%. A photo of the first set of wrought radiant tubes used in this facility is shown in Figure 1. This wall reduction translates to a comparable reduction in weight, which makes it much easier for maintenance personnel to swap out the tubes.

Wrought tubes, on average, cost 30-40% more than cast tubes. Doubling the working life alone makes the RA 602 CA tubes justifiable. In fact, doubling the work life and using a cost difference of 40%, the annual material cost is reduced by 30%. That is a savings of 30% per year over the life of the better wrought alloy. The calculations for these numbers are shown in Appendix A.

These savings do not even take into account a potentially more significant opportunity: elimination of a full week of downtime at the four-year mark when the thicker cast tubes must be replaced. Actual weekly revenues will vary for each heat-treat facility. To realize all cost savings, however, each individual heat-treat facility should evaluate how much extra revenue and profit they can realize from this extra week of production. The number can be quite significant.

Furthermore, some facilities require rental equipment to lift tubes and convey them into and out of the furnace. That is an additional expense. The lighter wrought tubes have eliminated the need for this rental equipment.

Today, some casting facilities have new technologies that can cast thinner-wall tubes. Based on the limited information from heat treaters willing to discuss tube life, the thinner the cast tubes, the shorter their life. Figure 2 shows a graph of our customers’ reported experience with tubes based on wall thickness, alloy and operational life.

It is important to note that in order to get the maximum life from radiant tubes, proper burner alignment during installation is vital. Flame impingement on a tube wall can quickly damage radiant tubes. Furthermore, all specified preventive maintenance suggested by furnace manufacturers should be diligently followed, particularly soot burn-off cycles at the suggested intervals.

One tool-steel processor making tool-steel parts requiring heat treatment at 2150°F was using a muffle made from cast 2.4879, which is the equivalent of 22H2. The material lasted between one and one-and-a-half years. There was no observed roof sag in that time. Once the first signs of sag were observed, however, rupture soon followed.

Even though the material has very high creep strength, there is very little ductility to accommodate any such sag. This particular company replaced the cast material with a muffle fabricated from RA 602 CA. This new muffle lasted almost two years. The higher unit cost of the cast material imported from Europe combined with the longer life of the RA 602 CA resulted in a significant cost reduction.

The numbers used in this analysis are NOT actual prices but meant for illustration purposes.

Author’s note: We would like to acknowledge both Euclid Heat Treating and Solar Atmospheres for using alloy RA 602 CA; for working with Rolled Alloys to collect the data on life cycles; and for allowing us to share the information for the benefit of the entire heat-treating industry.

The end of the useful life was due to the weight of an assembly being welded onto it; not creep or rupture. No roof sag was observed at the two-year mark. In this particular instance, the case for the wrought material was simple. The replacement muffle cost less and lasted longer, and there is potential here for significant usable life increase.

Redesigning the conveyor system to eliminate the weld should at least double the life because there was no creep from muffle roof sagging yet. Once lower-cost wrought alloys start to show roof sag, they typically still have 75% of their usable life. They can continue sagging until the sag is far enough that it threatens to contact parts.

In terms of the economics of alloy pricing, RA 602 CA currently sells at a 50% premium over the price of nickel alloy 601. Traditionally, RA 602 CA and HR 120 are comparably priced. For the 50% premium compared to 601, a threefold increase in life is achieved. That also means two additional weeks of production over the life of the furnace due to not having to replace the lower-alloy muffle twice during the life of the RA 602 CA muffle. When replacing HR 120 muffles, the savings are again due to the additional life as well as the elimination of the week(s) of downtime.

Solar Atmospheres has been using bar basket fixtures fabricated from RA 602 CA for at least four years.[3] These baskets must resist heat up to just below 2300°F while supporting 100-pound parts. Prior alloys included 600 and HR 120, which lasted five and 10 cycles respectively. At that point, they were so distorted that they required one maintenance person to cut the sides off, straighten all four sides and the bottom and then re-weld them together. This is a labor-intensive process, requiring at least a day.

After switching to RA 602 CA, these baskets have been through more than 40 cycles and do not yet require straightening. The usable life is a fourfold to eightfold increase depending on alloy. Figure 3 contrasts the other alloy baskets with the RA 602 CA basket, showing the improvement in the latter.

Fixtures, particularly honeycomb-design cast grids, have been marketed on their ability to hold their shape without deformation. The most widely used cast grid is a series of straight sections intersecting into small cylindrical sections.

These cast grids do not warp. The more conventional cast grids will eventually develop cracks where the straight sections and cylindrical sections meet. Eventually, these cracks extend over the entire assembly. The honeycomb design will stay straight for much longer periods of time before cracking is seen. These different grids are shown in Figure 4. 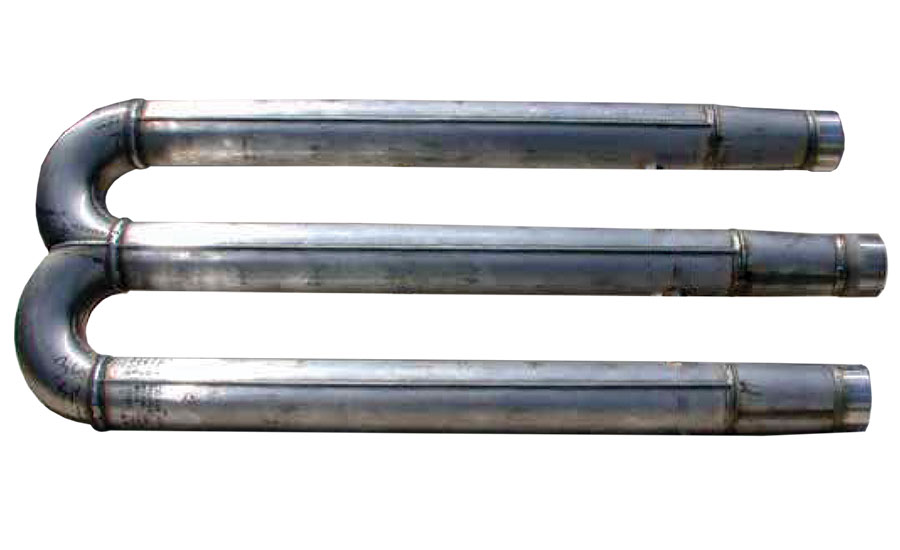 A wrought grid has the potential to substantially reduce weight. When weight is reduced, more parts go on the grid before furnace capacity. That, in turn, increases energy efficiency while lowering unit energy costs.

There is more potential for grid warpage with wrought alloy grids. When flatness is very critical, slight warpage in a wrought fixture could be enough to produce out-of-flat parts. For the many that don’t have that severe of a requirement, these lighter fixtures may be an effective cost reduction.

Another option is to use a serpentine grid fabricated from wrought material that consists of a series of straight sheet or plate pieces between formed curved plate or sheet pieces bent into snake-like shapes. There are drill holes in each straight and bent piece so that a round bar can pass through and hold all pieces together. These bars are threaded on both ends and affixed together with nuts, which are welded. The drill holes are slightly larger than the round bar, and they are a little longer that the total width of the fixture. The only welds are where the nuts are welded to the bar. The individual pieces are unconstrained, and the extra length allows for free movement due to expansion.

In this case, the whole portfolio of wrought alloys can be considered based on temperature, atmosphere and quenchant to be used, including 309, 310, RA 253 MA®, RA330, X, 600, 601, RA333® and RA 602 CA®. Stainless steels should be limited to applications where there is no liquid quenching, no carburizing atmospheres and no sigma-phase formations. Before selecting an alloy, ensure that it will have sufficient creep strength at the highest temperature that the fixture could see.

Today, many heat-treat facilities are satisfied with the materials that they use in the most difficult environments or hottest temperatures. For 30-40% more cost, there are wrought materials that will significantly increase life over current alloys and eliminate one to two downtime cycles for replacement as a result of their longer expected life. Facilities are reluctant to incur the added cost of the wrought material, and they do not understand how much potential cost savings can be realized over the life of the better fixture.

For fixtures, the concept of the percentage of furnace BTUs going to parts (rather than fixtures) is an important consideration that many are not yet aware of. This concept is usually not even considered when deciding on materials to use. Users can significantly lower costs of heat treating when all these costs and cost savings are factored into the selection of the alloy.

How to Weld Heat-Resistant Alloys

Considerations for Choosing the Optimum Fixtures

Making the Most of Muffle Tube Selection

RA 602 CA®: An Alloy for the Most Extreme Temperatures