As a result of its unique properties, aluminum has been of key importance in many of the developments of the past century. Let’s look at that history and some great nonferrous products/applications along with their thermal treatments.

Why is aluminum’s story only about a century old? Because although aluminum is the most abundant metallic element in the earth’s crust (8%), metallic aluminum was produced for the first time just 200 years ago. It was not until 1886 that a commercial process was developed – the Hall-Heroult process – to refine aluminum from its oxide, alumina.

In fact, aluminum was so rare it was more valuable than gold by the middle of the 19th century. It was so precious that aluminum bars were displayed with the French crown jewels during an international exposition in 1855. Development and fine-tuning of Hall’s electrolytic process resulted in a reduction in the price of aluminum ingot from $4.86/pound in 1888 to $0.78/pound in 1893.

By the turn of the 20th century, the Wright brothers were looking for a lightweight engine for their aeronautical experimentation. Finding none, a mechanic from their bicycle shop, Charles Taylor, built a 13-HP engine weighing 150 pounds in just six weeks using only a lathe, hand tools and a drill press. The alloy used by Taylor was 92%Al–8%Cu, and an examination in 1985 determined that it was heat treated by precipitation hardening to strengthen the crankcase. In spite of this, Alfred Wilm is credited with developing this heat-treatment process in 1909, leading to the patenting of the Al-Cu alloy, duralumin (see photo).

Due to the need for weight reduction, aerospace applications led the way in the development of aluminum and its alloys. These developments included clad aluminum sheet, forged bearings, hot isostatic pressing and blind rivets. Although composites are making inroads, most commercial aircraft are almost 80% aluminum by weight.

World War II and its need for aluminum in military aircraft reduced the availability of aluminum for automobiles. By the end of WWII, just 12 pounds of aluminum was used in the average American car. Due in part to the energy crisis of the 1970s, the amount of aluminum in automobiles (in pounds) has increased every year for the past four decades to a total of about 460 pounds in 2020. A 6-8% fuel savings is obtained for every 10% reduction in weight by replacing steel with aluminum.

Many other industries have utilized aluminum to make their products better. This includes the ship- and train-building industries. The S.S. United States, built in 1952 with a lightweight aluminum superstructure, still holds the record for the fastest westbound transatlantic crossing. When the Japanese-made bullet trains switched from steel to aluminum construction, they were able to travel more than 30 MPH faster. Space exploration is another area where aluminum is on the cutting edge of technology.

Something we take for granted today is the aluminum beverage can. Only 57 years ago, the first two-piece, drawn-and-ironed can was produced. That same year (1963), Iron City Beer in Pittsburgh was the first to utilize pull-top technology on 300,000 cans. Royal Crown Cola was the first soft-drink producer to utilize all-aluminum cans in 1964. By 1985, aluminum became the most popular beverage package, and the aluminum bottle was introduced in 2000. The fact that aluminum is easy to work with and readily recyclable make it attractive for a variety of consumer products.

Owing to aluminum’s beauty and workability, Apple has used it in a variety of its products. Extrusion is an important manufacturing process for many of these products, and the extrusion process is the key thermal treatment for many of these alloys. In this process, billets of aluminum are heated to temperatures ranging from 700-930°F. The material then goes through an extrusion press with pressures ranging from 100 to 15,000 tons. A soft alloy taking on a simple shape can be extruded at a rate of 180 feet/minute or more. Some aluminum alloys require further thermal treatment, but many used for extrusion are designed to be used as-extruded. 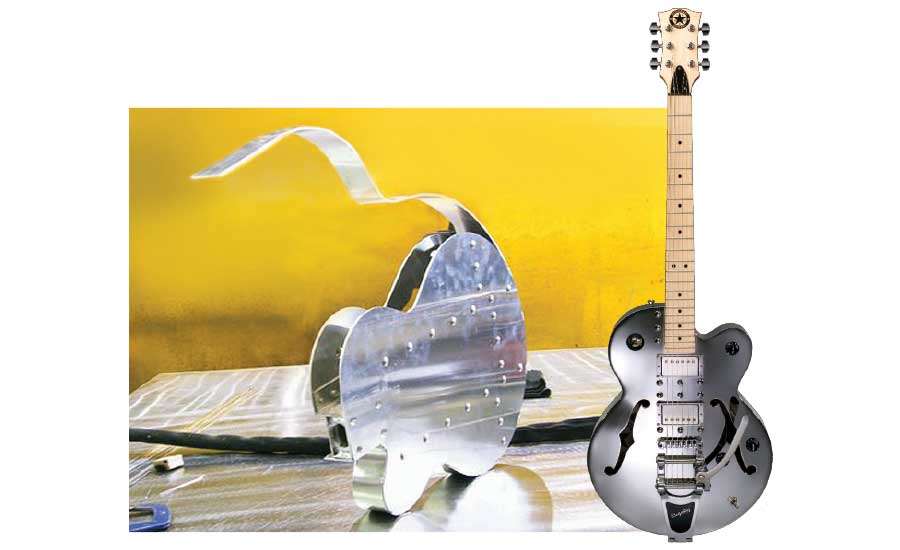 Another use of extruded aluminum makes nice music. The company is no longer in business, but this is how their guitars were made. The material is laser-cut, 0.080-inch-thick 5052 aluminum. The top is subsequently formed with the arch in both the side-to-side direction as well as top-to-bottom.  A single long strip, which has been annealed to enhance formability, is then formed around the arched face and welded in place. MIG and TIG welding are utilized in the production of this guitar.

Once the aluminum body of the guitar is fully assembled, it goes through the finishing process. Several types of treatments are available for aluminum, and all of these are used on this musical instrument. They include anodizing, liquid coating, powder coating and others. The guitar depicted was anodized, which is an electro-process that forms a durable, porous-oxide film on the surface of the aluminum extrusion.

Anodization is accomplished by immersing the extruded-aluminum profile in a tank containing an acid-based electrolyte. A current is passed through the tightly temperature-controlled solution. The extruded part serves as the anode, so the electrolyte releases oxygen ions at the surface of the profile. The oxygen immediately combines with the surface aluminum to form a hard aluminum-oxide film. Organic and inorganic dyes as well as metal oxides can be added to this process for color.

The guitar’s final assembly process connects the wooden neck to the all-aluminum body. People who have played this extruded-aluminum instrument comment that the notes resonate longer and sustain stronger. Aluminum makes the difference in this and many other applications.

Nonferrous is More than Aluminum

Our country’s coinage is primarily nonferrous, and thermal processing plays multiple roles in the manufacture of the coins we use every day. Coins have government-approved designs stamped in them much as they did in ancient times. U.S. coins must all contain the following words: “In God We Trust,” “United States of America” and “E Pluribus Unum.” 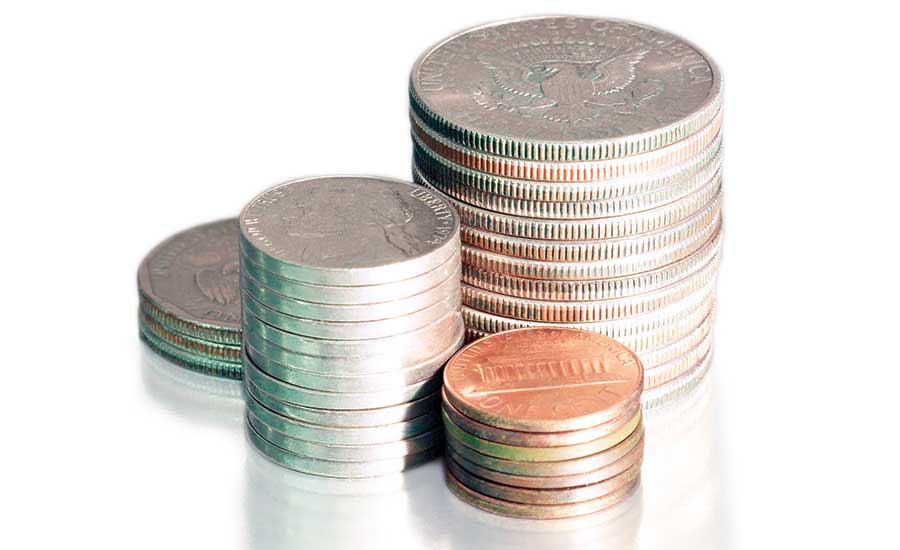 Each year 14-28 billion coins are manufactured in one of three U.S. mints across the country. As many as 80 million coins are produced in a single day with up to 750 produced on a given stamping machine every minute.

The manufacturing process is both complicated and interesting. It begins with a coin design and the transfer of that design to a large clay model about eight times as large as a finished coin. This image is cast in plaster, which is able to be finished in fine detail. A reducing lathe traces the plaster model, machining the now coin-sized design into a soft piece of metal called the master hub, which is a positive model of the coin. It takes at least 24 hours to complete this detailed machining operation.

Each time the die is compressed by the hub it is work-hardened, and it is necessary to anneal dies before they can be reused. Annealing-furnace atmosphere must be closely monitored to avoid carburization or decarburization of the die. The dies are then cooled at a controlled rate, including an oil-bath quench. If they are not stored properly or not allowed to fully cool, the die will not work-harden properly and will wear more quickly.

Before coins can be stamped, bars of the proper chemical composition are heated and rolled into strips the thickness of a coin. The coils received at the mint are 1 foot wide and 1,500 feet long. A machine punches out smooth disks, called blanks, from the strips. Blanks are coin-sized but have no design.

After annealing at over 1300°F (700°C) and quenching, blanks are washed to remove the discoloration. They are then fed into an upsetting machine that puts a raised rim around the edge of each one. The highest point of the final design is lower than the rim, which is harder than the rest of the coin.

Thermal processing is used throughout the coin manufacturing process for both the coin material and the hubs and dies used in the stamping process.

We hope you have enjoyed this nonferrous article on common applications of nonferrous metals and learned something about things we may take for granted. For more practical examples and stories like these, check out our Everyday Metallurgy book in the online bookstore.