Retrogression and Re-aging for Aluminum Alloys

Retrogression heat treatment and re-aging (RRA) is used for retaining optimal strength in aluminum alloys such as 7075-T6 while avoiding stress corrosion cracking and for improving formability of aluminum components such as extrusions. Let’s learn more.

In some tempers – T4, T5, T6, and even T7, T8 and T9 – RRA involves heating into the solvus temperature range and quenching. Unlike conventional solutionizing heat treatments that involve long times, retrogressive heat treatment can be conducted within a matter of seconds and can be synchronized with a given operation, such as forming, followed by re-aging.

Aluminum has been and probably will be, at least for the foreseeable future, a structural material choice for the aerospace industry. Development of high-strength aluminum alloys such as 7075 and 2024 lead the way toward decreasing weight and fuel consumption in aircraft.

Nevertheless, over the years, many aircraft parts and structures fabricated from 7xxx-T6 were discovered to be prone to corrosion-induced damage, including SCC (stress corrosion cracking) and exfoliation. This was a concern, especially for the older and still-in-service fleets of commercial and military aircraft using these alloys.

The SCC phenomenon and its effects on aluminum alloys, the history and process, RRA forming, and tools for processing the alloys with RRA will be discussed here. 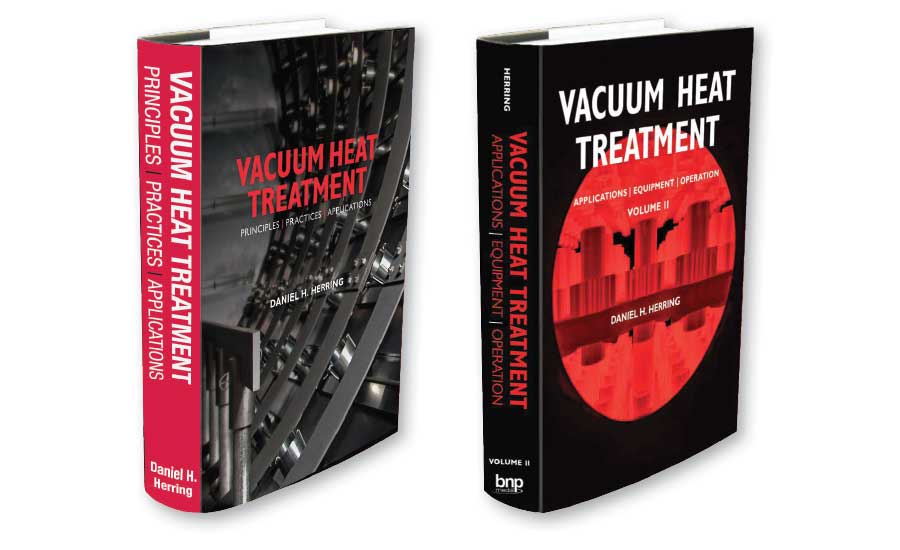 Vacuum Heat Treatment Volume II by Dan Herring covers new topics and expands on those already discussed in Volume I, making this two-volume set the comprehensive resource on the subject of vacuum heat treatment. Volume II will provide readers with a wide range of useful information, both from a practical and technical standpoint on the subject and give them the opportunity to reach out to sponsors to learn even more. Readers will be able to make better and more informed decisions about their equipment, process and service needs. What makes these books unique to the heat-treatment industry is that they are written specifically for the heat treater, engineer and metallurgist by one of their own.

Stress corrosion cracking (SCC) is a form of embrittlement induced from the combined influence of tensile stresses and a corrosive environment. The impact of SCC on a material usually falls between dry cracking and the fatigue threshold of that material.

SCC is highly chemically specific in that certain alloys are likely to undergo SCC only when exposed to a chemical environment that is only mildly corrosive to the metal. Hence, metal parts with severe SCC that appear bright and shiny are in fact riddled with microscopic cracks. This factor makes it common for SCC to go undetected prior to failure. SCC often progresses rapidly and is more common among alloys than pure metals. The reason for this is microscope anodic and cathodic sites, such as the differences between grains and grain boundaries, precipitates, etc.

One of the most classic examples of SCC is the “season cracking” of brass cartridge cases, a problem experienced by the British army in India in the early 19th century. It was initiated by ammonia from urine, dung and horse manure decomposing at the higher temperatures of the spring and summer (the armor was stored in the stables in the monsoon seasons). There was substantial residual stress in the cartridge shells as a result of cold forming, which, combined with the corrosive environment, led to long cracks at the cartridges casings. The problem was solved by annealing the shells to reduce the remaining residual stresses (Fig. 1).

7075 Aluminum Alloy and its SCC Behavior

AA7075 is a precipitation-hardening aluminum alloy that is alloyed with elements such as Zn, Mg and Cu. In addition, minor amounts (less than 0.3 wt.%) of Ti, Mn, Cr and Zr are commonly added to the alloy to benefit solidification, grain refinement and various other metallurgical purposes.

AA7075 is considered one of the strongest commercially available aluminum alloys and is the workhorse of the aerospace industry. This alloy derives its strength from fine h¢-phase and h-phase (MgZn) precipitates.

The strongest aging condition of AA7075 is the T6 temper, denoted as AA7075-T6. Because of its strength, the T6 temper is also referred to as the “peak-aged” condition. The standard procedure for its production after solution treatment at 466°C (835°F) is a single aging for 24-48 hours at 121°C (250°F). The resulting microstructure consists primarily of finely distributed h¢ precipitates, fewer quantities of h precipitates and any surviving G.P. zones. The size and distribution of the h¢ and h precipitates critically influence the final strength.

However, AA7075-T6 is also highly susceptible to SCC. It is generally accepted that small h precipitates distributed along the grain boundaries are the primary cause of poor SCC behavior (with the proper corrosive environment, such as humidity). In response, the T7 temper was developed as a way to reduce SCC susceptibility.

We will conclude this discussion in February.