The Intersection of 3D Printing and Machine Learning

In the past, the applications of metal additive manufacturing, otherwise known as 3D printing, have primarily been confined to prototyping. Recently, the field has begun to undergo a major transition, as researchers push closer to developing metal 3D printing as a reliable form of industrial manufacturing.

Major obstacles are left to tackle before the field can fully make the leap to reliable manufacturing, especially in high-risk applications such as aviation components.

“One of the biggest hurdles between just making a part that looks good and actually putting it on an aircraft is making sure that the part you’re producing doesn’t have flaws in it,” said mechanical engineering (MechE) alumnus Luke Scime.

Scime worked with MechE’s Jack Beuth, director of the NextManufacturing Center, to develop a machine-learning algorithm that detects anomalies within a part as it is being printed – a practice known as process monitoring. The specific type of printing they worked with – laser powder-bed fusion – involves spreading a thin layer of powder (just 30-60 microns in diameter) and melting it in select areas to form a layer of the printed object. The process is then repeated for the next layer, with each build containing hundreds or thousands of layers. Many of the errors that can occur during a build are due to the incorrect spreading of the powder layer.

The race to develop a practical and comprehensive form of process monitoring is on. Various researchers are attempting to use temperature monitoring, acoustic techniques, spectroscopy and other methods in order to get the best understanding of what is happening during a build at the structural level.

Limited types of monitoring have already been introduced commercially to some degree. Most of these rudimentary forms offer only a reading to be interpreted by the machine operator, however, without any capacity for automated analysis. Scime’s work takes process monitoring to a new height, enabling automated analysis in real time through a computer-vision algorithm.

“Computer vision is a term for using data-analysis techniques to understand what’s happening in an image,” Scime explained.

Is 3D printing the future for ceramics? 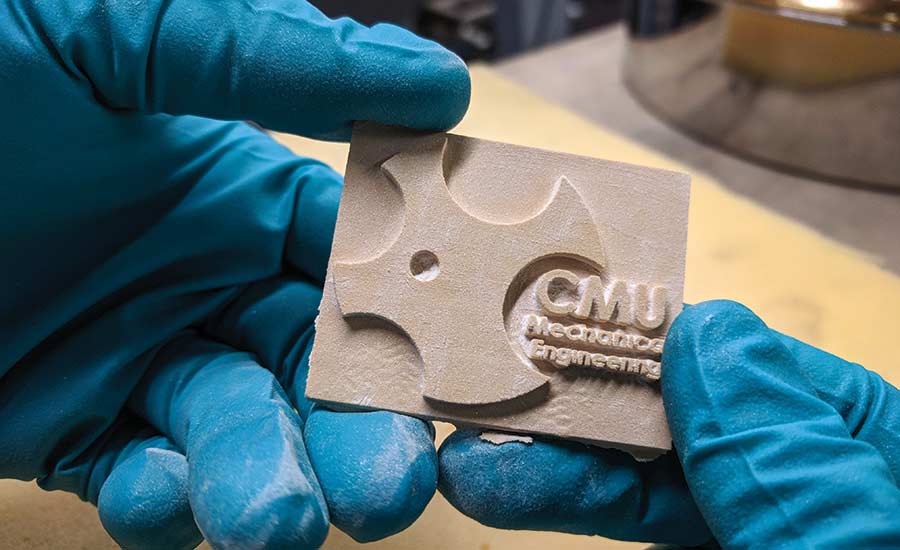 The Department of Mechanical Engineering’s (MechE) B. Reeja Jayan is no stranger to accolades. She’s received awards from the Army Research Office and the Air Force Office of Scientific Research and was one of Pittsburgh Magazine’s 2017 40 under 40 honorees. Now she has once again been recognized for innovations in materials processing as a recipient of the 2018 National Science Foundation (NSF) Faculty Early Career Development Program (CAREER) Award.

The award, including $500,000 in research funding, is bestowed upon a faculty member in the early stages of their career with a proven potential to be both a leader in their field and to integrate their research into novel educational opportunities. The focus of her most recent work will be researching how electromagnetic (EM) waves may be used to alter the structure within ceramic materials, potentially enabling the 3D printing of ceramics. 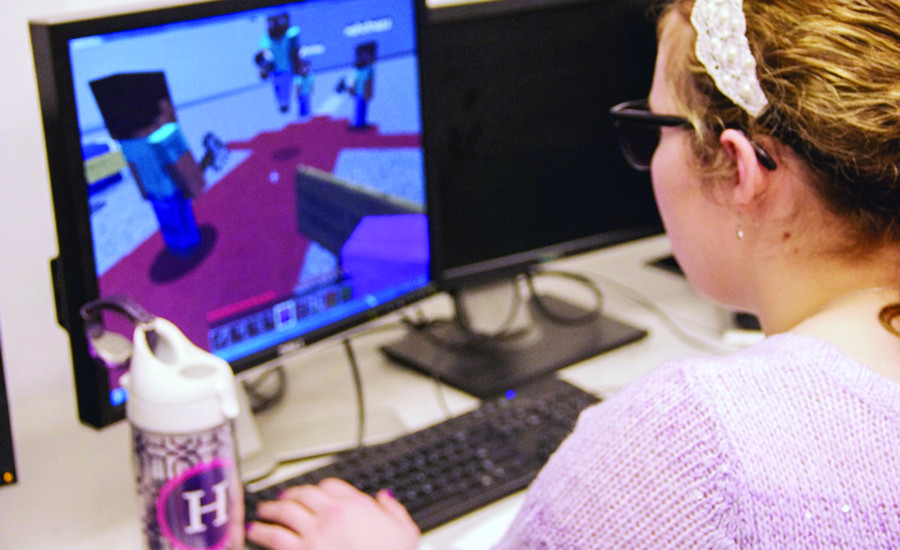 A graduate student explores the Minecraft classroom in a “Materials and Their Processing for Mechanical Engineers” lecture.

When asked about the current state of the intrusion (burgular) alarm market, 85 percent thought it was good or excellent, up from 81 percent last year and significantly above their predictions; when asked about predictions for 2019, a whopping 96 percent have a positive outlook.

The development of ceramic 3D printing has lagged behind that of other materials, such as polymers or metals. Traditional ceramic manufacturing uses large amounts of energy, often requiring materials to be heated at extremely high temperatures. Jayan, however, hopes to instead use EM waves (such as the microwaves we use to heat our food) to induce changes within ceramics at the structural level. If successful, she could potentially be able to achieve the same quality of results as current manufacturing methods — at a fraction of the energy cost.

The practical applications created by the possibility of this novel manufacturing process are as significant as they are varied. 3D-printed ceramic parts could find use in sustainable infrastructure, transportation, clean energy, water management, aerospace engineering and healthcare. By combining research in the fields of electrical and computer engineering, electromagnetics, materials science, mechanical engineering and chemical engineering, the process Jayan is developing could provide a low-energy means to meet these industries’ demands for lightweight, high-strength materials.

The focus of the CAREER Award is not only to continue producing breakthrough research, but also to integrate this research into an educational setting. In the past, Jayan has received media attention for being among the first to fully integrate the popular open-world game, Minecraft, into a university-level engineering course. She plans to continue using “builder’s games” like Minecraft to teach students how building (aka processing) can change the way materials assemble (their structure) and alter the properties of the material.

“Games create a higher level of student engagement and a more stimulating learning environment, reaching a broader spectrum of learners in the classroom,” Jayan said. “This helps address the challenge of cultivating a diverse and highly skilled workforce in manufacturing in the United States.”

Ultimately, the myriad of benefits Jayan’s research enables, both for engineering students and the various industries in which 3D-printed ceramics could see use, holds great promise for the future of industrial ceramic manufacturing.

His algorithm takes images of the powder bed and extracts features from the images. It then groups them and compares these images across different levels of analysis until it can create a unique “fingerprint” of the image. By feeding the algorithm hundreds of training images, already labeled manually with what’s happening in the image, the machine learns to recognize the different flaws and how they appear. From there, the algorithm can take any new images it receives from the machine’s built-in camera and compare its fingerprint to those from its base of knowledge to successfully isolate anomalies.

In their most-recent published paper, Scime and Beuth demonstrated that the algorithm can effectively detect flaws in powder spreading in the millimeter-size scale range. These flaws have a major effect on process stability, meaning the ability to print. The algorithm is able to spot these errors as they’re developing, and it can determine what the flaw is and where it is occurring.

“The holy grail is to deploy this in a real-time environment where you’re automatically analyzing data, doing something about it and then moving on,” Scime said.

According to Scime, the advance into self-correcting automation could look a couple different ways. At the most basic end of the spectrum, the machine could send an alert to an operator when it has detected an anomaly, allowing them to address the problem before continuing the build.

The next level of sophistication would be automating simple fixes, allowing a machine to recognize a critical flaw and react accordingly. It could, for example, stop printing a certain part while allowing others to continue or clean the blade that spreads the powder bed, with each response tailored to correct the specific type of anomaly identified.

The pinnacle of automated self-correction would be in combating an anomaly known as superelevation. Superelevation is when part of the build begins to warp or curl upward out of the powder layer, and it is responsible for the majority of part damage. Developing an automated way to correct this type of flaw will test the limits of what researchers like Scime are capable of.

Says Scime, “What it really comes down to is can we detect it, understand that it’s an issue and then design what we call processing parameters to do something different than we were doing in order to reduce the amount of warpage?”

It may be some time before we reach this level of automation because there are still multiple hurdles left to tackle. Much future work, such as accessing proprietary equipment and integrating software, will rely on researchers’ ability to coordinate with manufacturers. There is also much left to be understood about the effects of changing processing parameters in-build.

Some of Scime’s future interests lie in improving the accuracy of the machine-learning algorithm and examining how more sensor data can be incorporated into its analysis. However, the current algorithm has been demonstrated to be effective at accurately identifying a range of anomalies and is ready for application. Scime will be pursuing his post-doctoral training at Oak Ridge National Laboratory, but he hopes to continue to collaborate with the college of engineering and Beuth in the future.

Although we may not be 3D printing 747s anytime too soon, Scime’s and Beuth’s work is a major step toward making metal additive manufacturing a completely safe and reliable method for industrial manufacturing.

Emily Durham is a science writer and communications manager for Carnegie Mellon University's College of Engineering. In her work, she focuses on 3D printing, biomedical engineering and cutting-edge technologies.