Thinking back to our high-school days often brings a smile to our faces. As a freshman, the daunting task of picking a foreign language to study fell to The Doctor’s mother, who immediately chose Latin for him. While perhaps not the most popular of choices today, it was a highly rewarding experience, especially for improving one’s understanding of the English language and for making sense out of many scientific and scholarly works of the past. For example, did you know that iron (chemical symbol: Fe) derives its name and symbol from the Latin word ferrum? Its characteristics and heat treatment are equally interesting and much different from steel. Let’s learn more.

Iron is an element that in its pure form is lustrous, silvery, soft and ductile. However, pure iron (<0.008% C) is a poor engineering material, generally not as strong as most plastics. Iron is, however, the fourth-most-abundant element on Earth and one of the most widely disbursed elements in the Earth’s crust. In nature, it is found in various compounds with oxygen, sulfur or more complicated ores such as carbonates and silicates (Table 1). 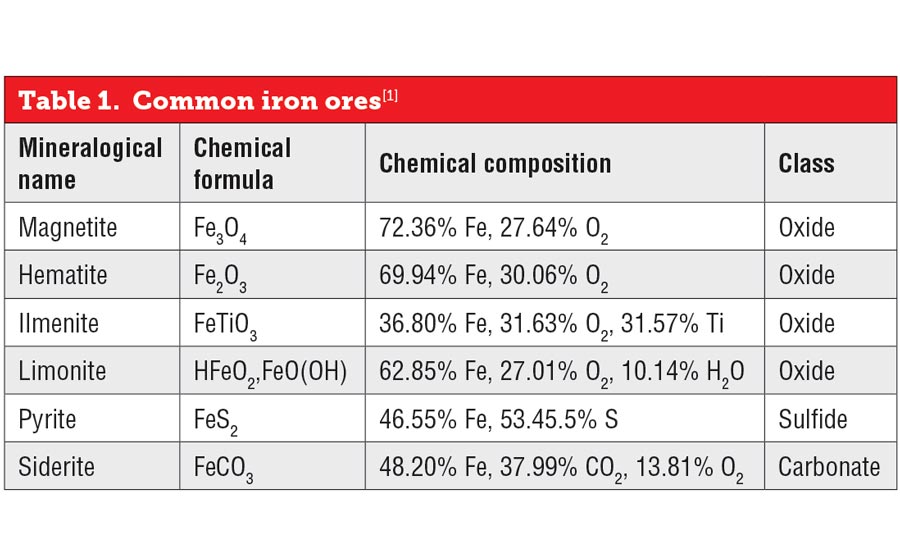 Iron has several unique properties that are of interest to metallurgists and engineers. First, iron requires relatively little energy to be extracted from its ore, making it the most cost-effective material choice (Fig. 1). Second, iron has asymmetric rotation of its electrons (that is, the electrons can spin in same directions). This allows iron to more easily combine with alloying elements, thus changing its properties. Finally, it is polymorphic, which means its crystal structure can “flip” or transform into different structures as a function of temperature and carbon content. Together these properties make iron one of the most attractive elements to use for the products we require in everyday life.

What is cast iron?

Cast iron (>2.11% C) is a generic term used to designate a family of metals with a wide variety of properties. All cast irons contain more than 2% carbon and an appreciable amount of silicon (usually 1-3%). The high carbon and silicon content means that they are easily melted, have good fluidity in the liquid state and have excellent pouring properties.

The basic types of cast iron are best differentiated by their microstructure, which is the form and shape in which the excess carbon separates during cooling. This determines the type of cast iron and establishes the nature of its properties – as opposed to their chemical analysis – because the various types overlap (Table 2). 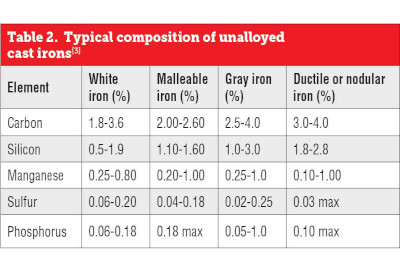 The metallurgy of cast iron is much more complex than its economics. In fact, cast iron is one of the more complex metallurgical systems. It is interesting to note that iron-carbon alloys (with less than 2% carbon) are actually metastable. The true stable system is the iron-graphite phase transformation system (Fe-C). The solid-state transformations, on which cast-iron heat treatments are based, are similar to those applied to steels and can be characterized as:

If an iron alloy exceeds 2.11% carbon, the carbon does not have to nucleate from decomposition of austenite, but it can instead form directly from the melt by a eutectic reaction. Note that cementite (Fe3C) can still nucleate at the eutectic more readily than graphite, but on sufficiently slow cooling, graphite itself is able to form and grow.

Consider the solidification of a 3% carbon cast iron. At a rapid cooling rate, dendrites of austenite form as the alloy cools below the liquidus and grow until the eutectic temperature is reached. At the eutectic point, graphite formation is suppressed, but austenite and cementite precipitate to form ledeburite – a form of eutectic that consists of spheres of austenite embedded in cementite. Ledeburite forms at the Fe-Fe3C eutectic. On further cooling, the cementite grows as the austenite decreases in carbon content. At the eutectic, the remaining austenite transforms to pearlite. At room temperature, the iron is hard and brittle and is called white iron because the surface of a fractured piece of iron is white and (somewhat) lustrous.

Upon slow cooling of a 3% carbon cast iron, austenite forms from the melt, but eutectic freezing is now slow enough so the products of the eutectic reaction are austenite and graphite. The eutectic graphite tends to form flakes surrounded by eutectic austenite. As cooling continues, the austenite decreases in carbon content, while the remaining austenite transforms to pearlite. Because the fracture surface appears dull gray, the material is known as gray iron (or pearlitic gray iron).

Cooling at an extremely slow rate results in phase changes similar to those of a slow-cooled component, except the eutectoid cooling is sufficiently slow to permit graphite to precipitate rather than pearlite. No new graphite flakes will form, but the ones present will increase in size. The final microstructure consists of graphite flakes embedded in a ferrite matrix. The resultant material is called ferritic gray iron. It is noteworthy that cooling of actual castings is seldom slow enough to obtain this structure.

The cooling rate of a portion of a casting may sometimes vary, resulting in a structure containing patches of both white and gray iron called mottled iron.[4]

Pig iron is the term that is generally applied to a metallic product that contains over 90% iron. Typically, it contains approximately 3% carbon, 1.5% silicon and lesser amounts of manganese, sulfur and phosphorus. Pig iron along with scrap metal is the base material for both cast iron and cast steel.

Chilled cast iron is produced by casting the molten metal in such a way as to produce a surface virtually free of graphitic carbon. The surface of chilled iron castings is extremely hard. The depth and hardness of the chilled portion may be controlled by adjusting the composition of the metal.

White iron is a type of chilled cast iron that is virtually free of graphitic carbon, which is achieved by selecting a specific chemical composition to inhibit graphitization for a given section size. The hardness of the casting may be controlled by selection of composition.

Malleable irons are relatively soft and can be bent without breaking. They include ferritic (or standard) malleable iron and pearlitic malleable iron. Malleable iron is obtained by the heat treatment of white iron, so the hard iron-carbide structure of ledeburite is converted to a matrix of ferrite or pearlite and graphite, the latter being precipitated within the iron. This form of graphite is sometimes referred to as tempered carbon. A wide range of mechanical properties can be obtained in malleable iron with different matrix structures around the graphite.

Gray irons are alloys of iron, carbon and silicon, in which more carbon is present than can be retained in solid solution in austenite at the eutectic temperature. The carbon precipitates as graphite flakes. The gray irons typically contain from 1.7-4.5% carbon and 1-3% silicon as major constituents.

Ductile or nodular iron, also known as spheroidal graphite iron, is cast iron in which the graphite is present as tiny balls, or spherulites, instead of graphite flakes (as in gray iron) or compacted aggregates (as in malleable iron). The nodular irons typically contain from 3.2-4.1% C, 1.8-2.8% Si and up to 0.80% Mn as major constituents. Several types of matrix structures (including ferritic and pearlitic) can be developed by alloying and heat treatment. The various grades of regular, unalloyed ductile iron are designated by their tensile properties (Table 3). 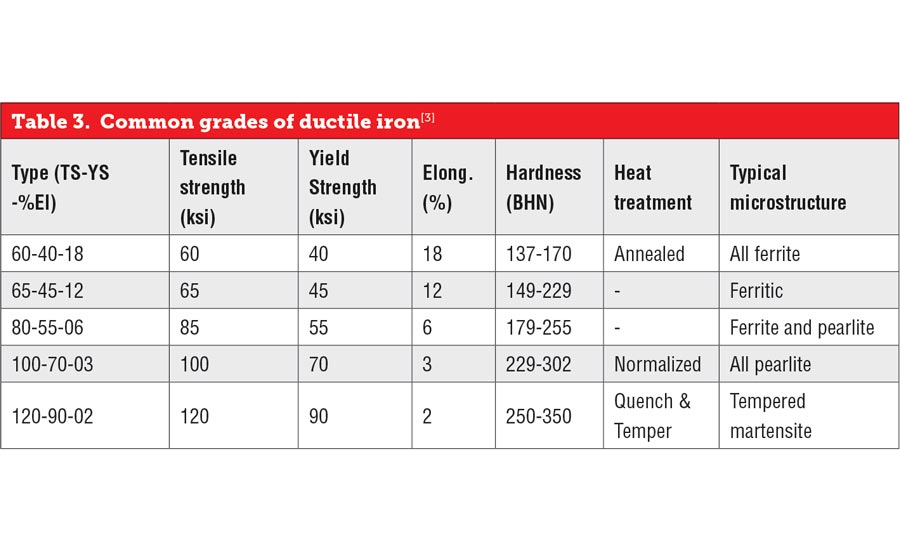 The types of heat treatments for cast irons involve stress relief, annealing, normalizing and hardening (quench and temper). In each of these processes, it is important to understand the materials’ response to its heat-treat process parameters (time, temperature and atmosphere).

The need for stress relief is due to internal (residual) stress in the castings, which is often the result of cooling a complex or intricate shape or one with radical changes in cross-sectional area. In stress relief, the time-temperature relationship plays a significant role (Fig. 5, online), and higher temperatures will affect mechanical properties and often require the use of protective atmosphere to avoid oxidation.

Soak time at temperature is in the order of 1.5 hours per 25.4 mm (1 inch) of cross-sectional area for sections over 50 mm (2 inches) and 1 hour per 25.4 mm (1 inch) of cross-sectional area below this thickness. The cooling rate is also important, with furnace cooling to 260°C (500°F) adequate for most castings. However, those with intricate shapes should be cooled to 95°C (200°F).

The annealing process is applied to castings primarily to improve machinability by softening the material. In the case of ductile iron, increases in ductility and impact resistance often result. Various heating and cooling cycles (Fig. 6) can be used each having a different purpose (Table 4). 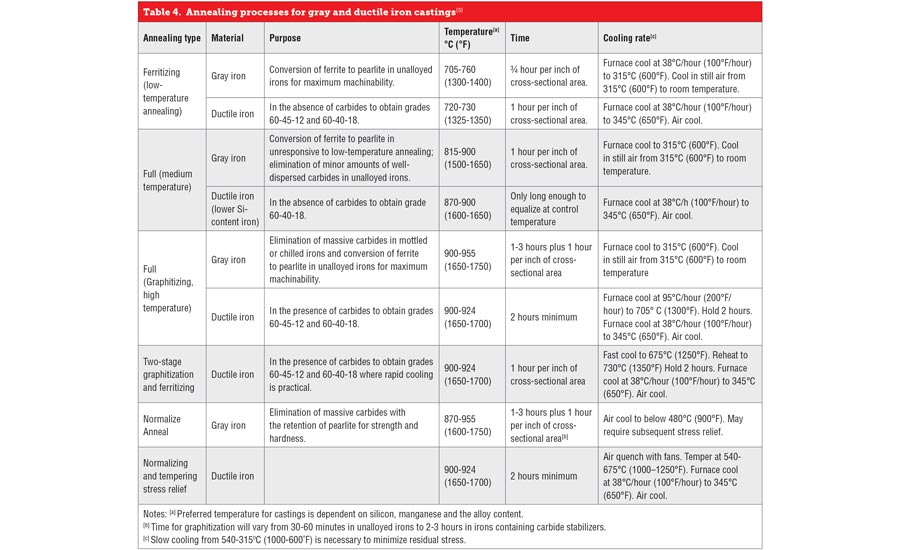 Iron castings are commonly normalized to obtain a microstructure of fine pearlite. The result is a microstructure with increased tensile strength and wear resistance. Normalized structures respond well to induction hardening. In general, the heating rate is not important, but excessive distortion and cracking must be avoided.

It is important to carefully select and control the process parameters when performing these operations so as to avoid problems such as distortion, warpage, overheating (“burning”) or quench cracking. The lower-critical temperature for cast irons can be calculated (Eq. 1 and 2) or determined by sample analysis.

In practice, castings to be hardened are austenitized at a temperature of 10-38°C (50-100°F) above the upper-critical temperature for one hour per 25 mm (1 inch). Heating should be gradual so as not to induce thermal stresses. After soaking, the parts are quenched. Typically, a severe quench is unnecessary. Oil or polymer quenching can also be used. Tempering follows and can be performed over a wide range, from 120-595°C (250-1100°F), to develop proper mechanical properties. Tempering time is typically shorter than for steels.

Cryogenically treated gray cast-iron brake rotors (Fig. 7, online) in automotive applications have been shown to improve service life. In police cars, where a combination of high speeds and frequent braking translates to brake-component replacement around 12,875 km (8,000 miles), cryogenic processors report having extended the time between replacement of these components consistently up to 38,625 km (24,000 miles).

High-alloy (e.g., high chromium, high nickel-chromium) white irons can be heat treated. For example, nickel-chromium white-iron castings are given a stress-relief heat treatment because, properly made, they have an as-cast martensitic matrix structure. Tempering is performed between 205°C (400°F) and 260°C (450°F) for at least 4 hours. This tempers the martensite, relieves some of the transformation stresses, and increases the strength and impact toughness by 50-80%. Malleable cast iron can be heat treated to the same microstructures as ductile cast irons.

The most common heat treatment applied to gray cast irons is stress relief because of non-uniform cooling of castings and annealing to improve machinability. Subcritical heating is used for both. Stress relief is done at temperatures between 550-650°C (1020-1200°F) without significantly lowering strength and hardness. Heating at temperatures between 700˚C (1290°F) and 760°C (1400°F) reduces the hardness for improved machinability.

Heat treatments of ductile cast iron include stress relief and annealing, and heat treatments used for steels include normalize and temper (for higher strength and wear resistance), quench and temper (for the highest strength) and austempering. Ferritizing (for the most-ductile microstructure) is done by austenitizing at 900°C (1650°F) followed by holding at 700°C (1290°F) to completely transform austenite to ferrite and graphite.

The heat treatment of cast iron deserves special consideration and is unique from steel heat treatment in many ways. The heat treater must understand these alloys in order to design recipes to ensure they uniformly achieve the required mechanical and metallurgical properties.