The addition of nitrogen (N2) and carbon into the steel structure improves corrosion resistance and mechanical properties of the steel component by forming nitrides, carbonitrides and even carbides with iron.[1] These compounds are stable at room temperature, preventing or delaying the formation of rust in corrosive environments.

Identified as a major contribution to enhanced corrosion resistance, post-oxidation of ferritic-nitrocarburized steel is used to improve corrosion in service. There are different methods of oxidizing the steel after this heat-treatment process. The additional corrosion resistance can be achieved through oxidation of any free iron at the surface that did not form one of the aforementioned nitrogen/carbon compounds.

Parts that are FNC processed have a typical metal appearance without much luster. Depending on how the FNC is performed, the process can also produce a matte finish, but generally the parts are gray/silver in color. The post-oxidation process produces a dark gray color that can appear black when coated with oil, which may be appealing for the part.

As process controls and sensors improve and become more capable of selectively measuring and controlling parameters, guesswork can be removed from the process and allow for predictable and repeatable control.

Because many different processes are used for post-oxidation, there is specific interest in controlling the post-oxidation process using multiple oxidation methods and understanding if appearance and corrosion resistance is specific to one process over another. In order to fully understand this, it is necessary to control the oxygen potential. Of course, there are other factors that weigh in on the success of the FNC and post-oxidation process, which are also of interest when looking at these processes and controllable parameters.

The FNC process simultaneously introduces both nitrogen and carbon into the part while in the ferritic state (hence the name). Typical FNC processing temperatures vary between 1000°F and 1100°F (538-593°C). Process cycles can range from one hour up to 24 hours, depending on the application requirements. With this lower operating temperature and no requirement for quenching (the microstructure is developed prior to the FNC process), there is good dimensional control with FNC compared to other case-hardening processes.

The control parameters for nitrogen and carbon concentrations in gas FNC are nitriding potential (KN), and carburizing potential (KC), respectively. The ability to control these parameters offers process repeatability. Ammonia (NH3) is the one gas used for delivering nitrogen to steel in gas FNC. The carbon-bearing gas can vary and usually depends on the gas availability, safety requirements, storage requirements and other similar factors. Common hydrocarbon gases used in FNC include endothermic gas, carbon dioxide (CO2) and natural gas (i.e., methane, CH4).

Ammonia dissociates on ferrous surfaces, and the nitriding potential is then defined as this partial pressure of gases shown:

When a hydrocarbon is added, there is also an equilibrium established between gases. The most dominant reaction providing carbon to the steel is the heterogeneous water-gas reaction:[1]

The carburizing potential for the heterogeneous water-gas reaction is then defined as the partial pressure of gases shown here:[1]

Other reactions that occur during FNC include the Boudouard reaction:[1] 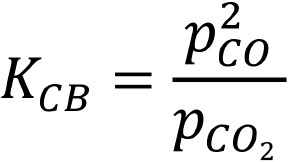 and the methane reaction:[1]

Control of the KN is commonly through the use of an in-situ hydrogen analyzer and the precise measurements of the incoming gas flows. Although not always required for the calculation of KN, the gas flows provide the ability to blend with gases that would dilute the H2 since the KN is calculated as a partial pressure of the amount of H2 to NH3 present.

There is significant variation in the flow ratios used for FNC processing.

Gas-flow ratio is very common in the industry today. This type of control is still accepted in most applications, but the requirement of KC control is starting to become more prevalent. Currently, the only industry standard defining recommended KC values is AMS 2759/12.

The compound layer (white layer) formed during the FNC process consists of nitrides, carbonitrides and carbides. The porosity of the white layer is a function of its nitrogen concentration and its proximity to the surface to produce thermodynamic instability. It is affected by KN and KC (i.e., the gas composition) during the process. As iron nitrides decompose back into iron and nascent nitrogen, the nitrogen bonds with itself to form diatomic nitrogen (N2). N2 is stable as a gas and will diffuse back into the furnace atmosphere, leaving porosity in the white layer.[3] Porosity can also be formed during cooling because the saturation limit of the white layer decreases with temperature.[1]

Porosity is thought to be both beneficial and detrimental to corrosion resistance. While porosity can trap oil and retain it in service to protect the part from a corrosive environment, a porous white layer is also more susceptible to cracking and/or breaking, leading to corrosion (which is why proper controls are required). Therefore, balance must be achieved for each application.

Post-oxidation of a part that has been heat treated with a gas FNC process provides additional corrosion resistance and can improve wear properties by reducing the coefficient of friction.[1]

Post-oxidation after an FNC process is not necessary, but doing so delivers a finish and color that may be desirable. With post-oxidation, the goal is to achieve Fe3O4 (magnetite) – a form of iron-oxide that is stable and forms a dark gray/black color. Post-oxidation typically takes place at 850-1000°F (454-538°C), with that step of the process ranging up to 60 minutes. Some of the more common media for providing post-oxidation are air, H2O, oxygen (O2) and nitrous oxide (N2O). Which media is used varies due to availability, safety and ease of control for the process. There are some claims that one type of media produces an oxide that performs better with respect to corrosion resistance.

Lack of control in the post-oxidation process can lead to undesirable results. Not enough oxygen during the process can lead to gray parts, witness marks on parts and “shadowing,” where the color of a part varies based on the racking configuration. If too much oxygen is available, hematite (Fe2O3) can form, affecting the color of the parts and possibly the corrosion resistance.

As mentioned previously, there is interest in the differences between the different types of post-oxidation processes and media used to perform the process. Part preparation, material type, FNC cycle and post-processes will all play a role in the evaluated performance of a part. Our case study used the same material processed under two FNC cycles, which was then divided out into groups for a secondary post-oxidation step. All parts were cleaned to remove dirt, debris, grease, oil and water. The purpose of running two FNC cycles was to generate variance in porosity with both tests having the same white-layer thickness. The targeted white layer was 15-20µm. Following the post-oxidation, the parts were cooled and stored to prevent any corrosion.

Five different oxidation processes were performed. Parts were heated up to 1000°F (538°C) in a N2 atmosphere. Once the parts were stable, the oxidizing media was introduced into the furnace. An atmosphere of 10-25 percent O2 was targeted. The parts were processed in this atmosphere for approximately one hour for each oxidation cycle. The oxidation media used for testing included air, oxygen (O2), nitrous oxide (N2O), water (H2O) and quench into a water-oil mixture. Oxygen was measured using an in-situ oxygen probe. Upon completion of the process, parts were cooled to 150°F (66°C).

Half of the parts from each process group were coated with a solvent-based rust-preventive oil (RPO). The parts were submerged in the oil for several minutes and then removed and allowed to dry.

Two pieces of each test group were sent out for salt-spray testing, which was performed in accordance with ASTM B117. The samples were not cleaned prior to test and were tested at approximately 30 degrees from the vertical, parallel to the flow of the fog. When more than 10% corrosion was visible on the surface of the sample, the test was terminated for that sample. The test was terminated for the remaining samples after 408 hours.

Two samples of each experiment (12 experiment categories in all) were sent for salt-spray analysis. All of the dry samples failed after 72 hours of exposure to the salt, except for one of the samples oxidized in air. Most of the RPO samples lasted for the duration of the test with less than 10% corrosion or no corrosion at all.

No type of oxygen-bearing media appears to be more beneficial over another with respect to corrosion resistance. The oxygen potential can be controlled with an in-situ oxygen probe for consistency from load to load to create a specific oxide compound as well as help prevent appearance inconsistencies.

From the test results, we can draw the conclusion that the use of a rust-preventive treatment prior to corrosion testing will provide the best results as it relates to salt-spray testing. Our testing also shows that multiple oxidation processes can be used with a controllable process variable that will allow for equal corrosion resistance with a slight difference in appearance.