This website requires certain cookies to work and uses other cookies to help you have the best experience. By visiting this website, certain cookies have already been set, which you may delete and block. By closing this message or continuing to use our site, you agree to the use of cookies. Visit our updated privacy and cookie policy to learn more.
Home » Simulation Software (Part Three: Nitriding, Nitrocarburizing)
Commentary/ColumnsThe Heat Treat Doctor
The Heat Treat Doctor®

Last but certainly not least, as the saying goes, is our discussion of gas nitriding and nitrocarburizing process simulators and how they are used to predict and control these case-hardening processes. Let’s learn more.

Today, these simulators are available from several original equipment manufacturers and academic institutions for the purpose of determining the nitriding process parameters (i.e., cycle recipes) required to obtain a given case depth, to predict the compound-layer composition, and to anticipate both the final surface and core hardness as well as the hardness distribution throughout the case.

One of the reasons that the prior microstructure is so important is that simulators need to determine the amount of nitride formers not tied up as carbides. Nitriding processes are ideally performed on quenched-and-tempered steels. Tempering is performed at a temperature of at least 10˚C (50˚F) above nitriding temperature. Simulators (and most specifications) typically estimate hardness distribution and case depth. Case depth is defined as core hardness plus 50 HV.

Simulators also need to determine hardness changes during nitriding. This is done by assuming that the softening effects that occur with increasing temperature are similar to tempering effects. Other factors that influence the simulator models (and involve an in-depth understanding of kinetics and thermodynamics) are nucleation, compound-layer growth and composition, diffusion/precipitation-layer growth and final hardness distribution.

These factors are incorporated into the output of the various simulators (Fig. 1) based on work by such noted individuals as Sun and Bell (nucleation theory[4]), Hosseini, Ashrafizadeh and Kermanpur (compound-layer growth and composition[5]), Fick (diffusion modeling) and Kunze (precipitation layer growth[6]). While beyond the scope of this article, the reader is encouraged to review these papers to deepen their understanding of how these factors play a role in the inner workings of these simulators.

Simulators for ferritic nitrocarburizing (Fig. 2) are typically adopted from their gas nitriding simulator cousins by looking at the iron-nitrogen-carbon diagram (Fig. 3) at a specific process temperature and adjusting the diagrams to match the steel in question by using appropriate activity coefficients.

Control of a modern gas nitriding process (Eq. 1) is based on the modified Lehrer diagram[7] relating nitriding potential to the iron-nitrogen phase boundaries as a function of temperature.[11] 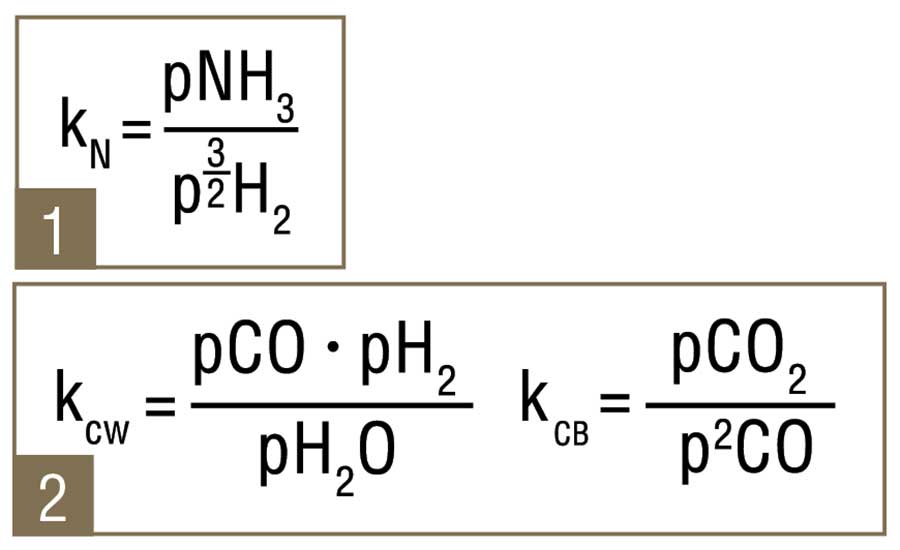 Control of a modern nitrocarburizing process (Eq. 2) is based on the Fe-N-C control diagram, displaying Fe2-3NC epsilon (ε) phase depending on temperature, nitriding potential (KN) and carburizing potential (KC) as shown in Figure 3.

The individual companies and research institutions that have invested considerable time, money and effort into developing these simulators should be complimented, but commercially available software packages running on desktop or laptop computers are needed for their wider adoption and use.

In this series of recent articles, we have introduced the idea to the heat-treat community that process simulators not only exist but can be used for highly accurate prediction of process recipes and to anticipate the metallurgical structure (and ultimately the performance characteristics) of the parts being run. Nitriding and nitrocarburizing simulators are no less capable than their carburizing counterparts.

Surveys of the heat-treatment industry conducted by ASM International in the late 1990s and early 2000s outlined a series of eight key industry goals, one of which was outcome prediction based on heat-treat modeling. The accomplishment of that goal is closer than ever. As such, the heat treater needs to embrace and use these simulation tools in his/her daily work.

The writer – with great pride and humility – would like to acknowledge good friend Dr. Karl-Michael Winter for his contributions to this article; his unwavering commitment to advancing gas nitriding/nitrocarburizing technology throughout the heat-treatment industry; and his many lectures, papers and discussions over the years.