This website requires certain cookies to work and uses other cookies to help you have the best experience. By visiting this website, certain cookies have already been set, which you may delete and block. By closing this message or continuing to use our site, you agree to the use of cookies. Visit our updated privacy and cookie policy to learn more.
Home » Simulation Software (Part Two: Low-Pressure Carburizing)
Commentary/ColumnsThe Heat Treat Doctor
The Heat Treat Doctor®

The acceptance of low-pressure (vacuum) carburizing (LPC) technology in manufacturing is due in large part to the ease of recipe development and modification made possible by the use of simulators designed specifically for this purpose. Let’s learn more.

Based on this input data, a carburizing recipe is established complete with the number and duration of hydrocarbon gas injection steps during the boost stage and the number and duration of evacuation or gas dilution steps during the diffusion stage. Gas flowrates are precisely determined and controlled via mass flowmeters. The program output is displayed graphically, illustrating the carbon profile as a function of depth as well as the surface carbon concentration at various steps in the process (Fig. 1). 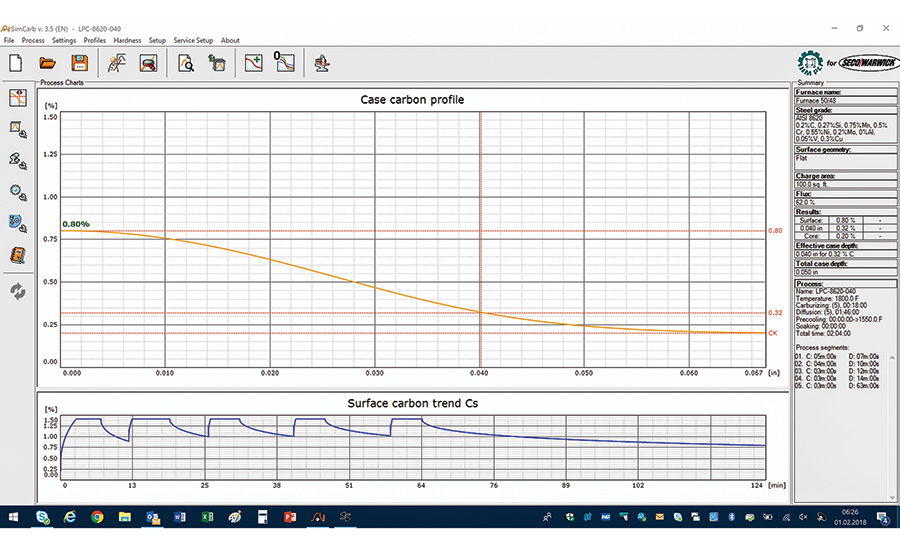 Material selection is typically done either from a lookup table of common steels (U.S. and/or European grades) or through the input of a custom chemistry. This chemical composition data (often in conjunction with Jominy data) is also used by some simulator packages to help determine proper quench response. These process simulators can also provide anticipated hardness profiles as a function of depth from the surface. It should be noted that when a carbon profile is converted into a hardness profile, part geometry and quenching variables may skew the final result.

One of the simplest ways in which to determine the effectiveness of a particular manufacturer’s simulator is to review various material choices available and ask if the output recipe has been confirmed by extensive empirical trials. In other words, have loads been run and results analyzed via testing or just through scientific calculation?

Part geometry is usually limited to simple shapes (cylindrical, spherical, rectangular, etc.) rather than asking the user to input sophisticated geometries. On the other hand, calculation of load surface area must be more accurate (within about ±10%) so that the proper amount of hydrocarbon gas is added. Surface carbon values are lower than their atmosphere counterparts – 0.70-0.75% C being typical.

While the final surface carbon content always corresponds to the setpoint value, it is important to recognize that most simulators estimate the carburizing case depth within about ±5% of this value. For this reason, an initial trial run is always recommended. It should also be noted that these simulators have now become more and more pre-cise and should be able to produce specification requirements with little testing. Once a process has been success-fully simulated, repeatability of results is almost a foregone conclusion (provided one has control of the equip-ment-induced variability).

Most simulator packages are run remotely on an office computer, and process recipes are uploaded to the furnace with a few keystrokes. They can also be manually input through a setup Wizard following instructions and dropdown menus (Fig. 2). 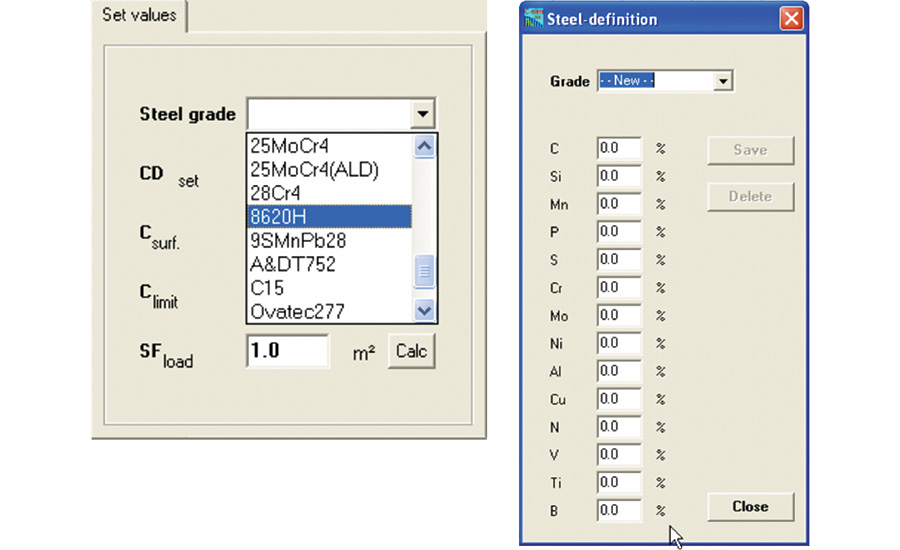 In some instances, the data obtained by running test parts indicates that the recipe needs to be modified to fine-tune the results. Common reasons for this include issues with:

• Carbide formation and/or carbide necklacing. This indicates that either the surface carbon content is too high during the boost portions of the cycle, the diffusion time was insufficient, the soak time at temperature was too short or the final hardening temperature was too low. Possible recipe changes include either shortening the boost times or reducing the number of boost steps. Additionally, adding more diffusion steps or increasing soak times and/or temperature will eliminate the problem.

• Retained austenite. One possible reason for this is that the surface carbon content of the steel in question is too high, so lengthening the last diffusion step will help reduce the final surface carbon value. Another cause is direct quenching from carburizing temperature, so reducing the temperature before quenching is recommended.

• Carbon content too high/low. The surface area of the load should be carefully calculated to see if the gas flowrate value is too high/low. Some manufacturers offer a limited number of flowrates (e.g., high, normal, low) that are not ideally matched to the actual surface area present, resulting in a higher/lower surface carbon content than anticipated.

• Surface pitting. This indicates that the surface carbon was too low during processing and should be increased. Pitting on gear teeth is a common example.

• Over-carburizing. In areas where the geometry influences carbon absorption (such as the tips of gear teeth), reducing the flowrate during the boost stage or adding more but shorter-duration boost steps helps minimize this effect.

• Part distortion. There are numerous factors that influence part distortion, including the type and hardenability of the steel, the type of quench medium (oil or high-pressure gas) and the final hardening temperature, to name a few. One wants to select a material with the lowest hardenability that will achieve the required mechanical properties, including surface and core hardness. Quenching from a lower temperature may also help, and the recipe should be adjusted so that there is enough time for the core/surface temperature of the parts (load) to equalize before quenching.

Until recently, LPC simulators were captive to the type of equipment being purchased. The principal limitation was that (as designed) the software would work only on a particular manufacturer’s furnaces running one type of hydro-carbon gas in a defined pressure range. In essence, the OEMs had proprietary software designed to work only with their systems. Today, at least one manufacturer has developed LPC simulation software that will produce recipes for all types of carburizing furnaces running all of the common hydrocarbon gas mixtures in use (e.g., acetylene, acetylene + hydrogen, actelyene + nitrogen and acetylene + ethylene + hydrogen).

The inherent advantage of low-pressure carburizing is its consistency, repeatability and flexibility. As more and more LPC furnaces find their way into the heat-treat shop, the need for and convenience of a universal simulator will become paramount. One should expect to find, as a minimum, the following features on any LPC simulator:

If you are or will be using LPC in the future, be sure the equipment has or comes with one of these state-of-the-art devices.

How to Move Molecules in Vacuum Systems/Part Two: Diffusion Pumps and Troubleshooting Tips