Vacuum heat treating encompasses a wide variety of processes. Case hardening is just one of them. Examples include carbonitriding and carburizing.

By diffusing carbon into the part surface, followed by quenching of the part, a hard and wear-resistant surface is formed while maintaining a ductile core. Transmission gears, pinions (Fig. 1) and shafts are excellent examples of carburized parts.

After pulling vacuum in the loaded furnace, heating begins as soon as the furnace reaches a preset vacuum level. A partial pressure such as nitrogen, hydrogen or ammonia can be introduced during the heat-up to reduce oxides or to introduce nitrogen into the steel surface to facilitate high-temperature carburizing (PreNit®).

Convection heating at the beginning of the cycle is also common to reduce cycle time. Once the entire part load has reached and is uniformly at temperature, a hydrocarbon gas source is added. Typical gas mixtures include 100% acetylene or acetylene mixtures with other gases such as ethylene, hydrogen and, in some cases, nitrogen. Diluting the acetylene can assist in process control by limiting the process reaction.

Introduction of the gas mixture directly into the hot zone initiates a catalytic decomposition of the acetylene gas on the surface of the parts to be processed according to reaction (1).

Once the reaction has taken place, the carbon adsorbed at the surface will start to diffuse into the material according to Fick’s second law of diffusion. Because the nature of the carbon saturation is immediate and to control carbide formation in the steel, the gas is injected in short spurts of a few seconds to a few minutes, which is alternated with intervals of either vacuum or inert gas such as nitrogen or argon introduced into the hot zone. During these intervals, the carbon diffuses deeper into the part. This is called a “boost/diffuse” cycle, which is repeated until achieving the proper case depth and carbon profile.

When using acetylene in a low-pressure carburizing (LPC) process, a pressure of 3-10 Torr is typical, and vacuum pumps are used to remove the gaseous byproducts of the reaction from the system. Both the case uniformity and repeatability of the process can be assured through proper control of the carburizing process.

Efficiency of the Process

The availability of carbon in the furnace atmosphere drives the effectiveness of the process, as well as the adsorption of carbon at the part surface and the rate of carbon diffusion into the part.

An example using conventional endothermic-gas carburizing can be seen by looking at the carbon flux (carbon potential) generated from carbon monoxide (CO) and supplemental gases in endothermic atmospheres, usually methane or propane (equation 2). Depending on the formation process used, the CO content is in the range of 20-30% of the atmosphere. Subsequently, the supplemental gases make up about 10% of the total flowrate. It must be noted that effective utilization of all of the carbon will not occur.

In this example, J represents the carbon-flux portion of the endothermic atmosphere. It relates proportionally to the carbon transfer coefficient () and the difference between both the atmospheric carbon potential and the concentration difference at the surface carbon (Co – Cs). Typically, the force driving this reaction is in the range of about 0.2-1.2%. Knowing this allows us to determine that an endothermic-gas carburizing process will provide up to about 3 g/m3 of carbon into the process.

By comparison, LPC mixtures offer approximately 60-90% of the available carbon (mass). This promotes a higher potential adsorption force on the surface of the part and is almost 100 times higher than displayed by endothermic gas. Therefore, depending on the hydrocarbon mixture used in the LPC process, about 600-900 g/m3 are available, giving an approximate 100-fold increase in process efficiency.

An important process parameter is time at carburizing temperature for carbon to adsorb into the alloy, and it is somewhat dependent on the material being run. The case depth will be determined by the carbon diffusion process (equation 3). The rate of carbon diffusion (J, carbon flux) is dependent on the different carbon concentrations C1 – C2 (at the unit distance dx), with D being the diffusion coefficient. Limiting this difference between carbon concentrations is the solubility of the carbon into austenite and the carbide-formation limitation, normally to a maximum value of 1.73% C at 1900˚F (1040˚C).

Running atmosphere furnaces at elevated temperatures will dramatically increase the maintenance needed to keep them operational. The same limitation cannot be said in regard to LPC equipment, whose materials of construction are typically designed for a 2400˚F (1315˚C) maximum operating temperature (well above the carburizing temperature). This is the reason that using the boost/diffuse method at temperatures over 1825˚F (1000˚C) can offer tremendous reductions in process time (Table 1) – up to four- to fivefold as compared to a carburizing processing temperature of 925˚C (1700˚F).

Typical case-depth uniformity for loads in LPC processes is in the order of ±0.0015 inch (±0.038 mm) to ±0.002 inch (±0.050 mm), which is dependent on both the desired case depth and carburizing temperature. To be successful, one must make certain that the parts, when limited by volume or weight (packed densely or lightly), are all uniformly at the process temperature at the beginning of the carburizing cycle. The ability of the hydrocarbon gas to penetrate (by varying pressure levels) and quickly change the carburizing atmosphere (through the use of boost/diffuse methods) will result in this tight case uniformity.

Alternatively, in atmosphere carburizing, case uniformities of ±0.005 inch (±0.127 mm) to ±0.010 inch (±0.254 mm) are typical. It is important to remember that uneven temperature distribution throughout the load will affect uniformity as well. One explanation for this is the effectiveness of the carburizing gases in LPC processing, as already mentioned. In endothermic-atmosphere furnaces, the internal fan circulates the atmosphere in the order of 2-3 m/s.

By contrast, LPC can replace the atmosphere much more frequently, up to once every five seconds (even though the demand for the carburizing mixture is lower). This results in a 100-fold increase (in volume) of gas at pressure of 7.5 Torr compared to atmospheric pressure of 760 Torr. Given the pressure difference in the furnace and the speed of gas particles entering at several hundred m/s (at the gas nozzle outlet), the hydrocarbon gas will fill the entire load within a fraction of a second.

Due to the absence of oxygen in the hydrocarbon gases used in LPC, one of the many metallurgical advantages is the avoidance of intergranular oxidation/intergranular attack. This offers improved mechanical properties (e.g., fatigue strength in gears) while also producing residual compressive stresses at the part surface.

Industrial machinery parts (Fig. 3) of 5120 (20MnCr5) steel are LP carburized  (Fig. 4) to an effective case depth of 0.020 inch (0.5 mm) followed by oil quenching and tempering to obtain a surface hardness in the range of 58-62 HRC. The microstructure requested was tempered martensite with finely dispersed carbides, free of grain-boundary oxidation or carbides. Fatigue life was required to be 20,000 cycles.

The process parameters were determined using a LPC process simulator known as SimVaC® (Fig. 5), in which it was suggested that the load be carburized at 1740˚F (950˚C) for 60 minutes and quenched in oil from an austenitizing temperature of 1580˚F (860˚C). After quenching, parts were cleaned and tempered at 350˚F (180˚C). 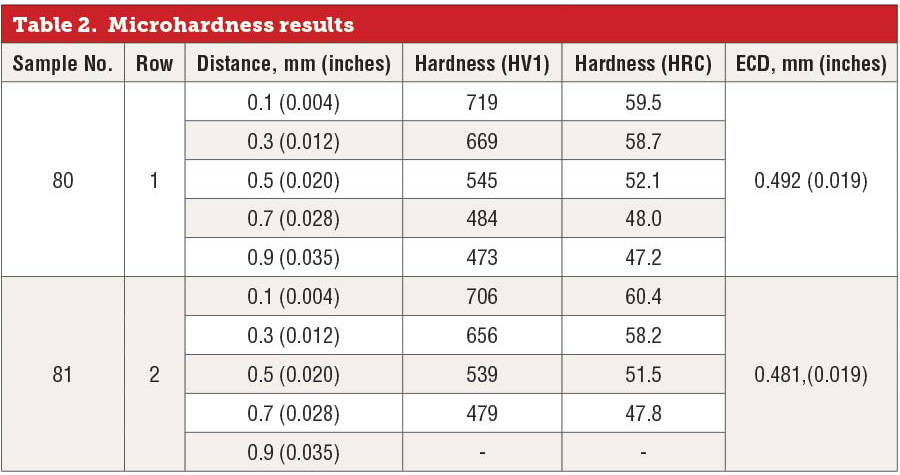 The process resulted in a microhardness profile (Fig. 6, Table 2) with the following parameters.

Low-pressure carburizing is a proven and cost-effective technology whose advantages make it a clear choice to replace alternative technologies such as atmosphere or salt-bath carburizing.

Bill Warwick is with SECO/VACUUM; Meadville, Pa.
You must login or register in order to post a comment.