The need for effective metal improvement stems from the multitude of metal failure modes. Corrosion, cracking and fatigue can undermine even the strongest steels, while extreme operating environments push high-value components to their material limit.

Laser shock peening (LSP) replaces traditional shot media with high-energy laser pulses, producing beneficial compressive stresses 10 times deeper than shot peening can achieve. Commercial laser peening was born out of necessity in the 1990s, and the story of its adoption reveals the unique power behind this surface-enhancement technology.

In December 1990, the United States Air Force grounded its entire fleet of B-1B Lancer aircraft. The B-1 heavy bomber (Fig. 1) came into service just five years prior as a long-range, supersonic replacement to the B-52, however, several engine failures in the Lancer’s General Electric (GE) F101 engines prompted all B-1 aircraft to be grounded and placed on “limited alert.”

The problem was foreign-object damage (FOD). The B-1’s low-slung engines were ingesting chunks of ice and other debris during takeoff. These foreign objects produced tiny nicks or cracks in the titanium fan blades – blemishes that were easily missed during routine inspections but quickly turned into focal points for concentrated tensile stress.

When microcracks develop in a high-cycle component like an engine blade, each successive load exacerbates the flaw. Repeated tensile strain widens the crack and propagates it deeper until the material reaches its fatigue limit and fails. In a jet engine, such failures can be catastrophic. Fractured blade fragments damage other engine components and may be ejected from the engine containment, which threatens passengers or other aircraft systems. A single blade failure can cause millions of dollars in damage, not to mention the hazard of a disabled engine and the risk of emergency landing.

To ensure the safety of B-1 aircraft and crew, the Air Force instituted an intensive inspection program for all F101 first-stage fan blades. Prior to each flight, maintenance technicians would meticulously run cotton swabs or dental floss over the leading edge of every blade. If any snag or defect was detected, the blade would be replaced before the aircraft was cleared to fly. The process was time-consuming and costly, and it restricted the readiness of critical aircraft during Operation Desert Storm.

Seeking a more comprehensive solution, the Air Force turned to laser-peening specialists at Battelle Memorial Institute, an innovative technological research institution in Columbus, Ohio. Laser peening was targeted to solve the F101 FOD problems because the material benefits exceed anything achievable with conventional surface treatments. An experiment was devised to assess the benefits of laser peening titanium F101 blades, and the results ushered in a new era in surface-treatment technology.

Laser peening is a mechanical surface-enhancement process using a high-energy pulsed laser to generate powerful compressive-stress waves. Each laser pulse produces a high-pressure plasma burst on the part surface that sends a stress wave propagating deep into the material (Fig. 2). The stress wave induces plastic deformation as the material yields, generating compressive residual stresses that can extend several millimeters beneath the surface.

The blades were then subjected to simulated FOD in the treatment area using a chisel or an electrical discharge machine (EDM). Notches up to 0.25 inch deep were cut into the leading edge of each blade, and the blades were annealed for 24 hours to simulate operating temperatures. Each blade was then fatigue tested using a sonic frequency device, with the stress amplitude progressively increased until crack propagation caused the blade to fail.

Figure 3 presents the test lifetime of each blade given various treatment conditions, and the results reveal LSP’s dominance in preventing FOD failure. Laser-peened blades outperformed all others in the study by a wide margin, achieving longer fatigue lifetimes and withstanding higher thresholds of induced stress. Most remarkably, laser-peened blades with simulated damage even outlasted a pristine blade that received no damage whatsoever. 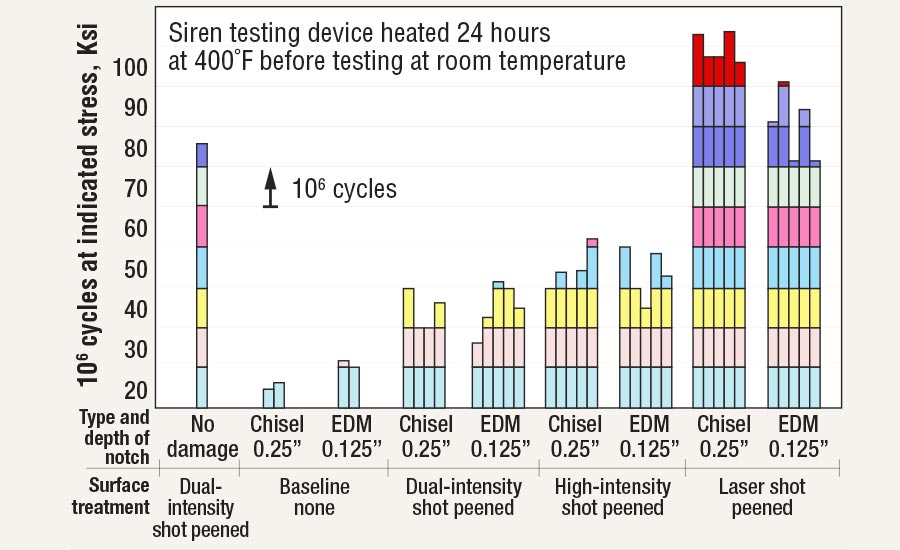 This was a landmark result. The experiment proved that laser peening significantly enhances titanium-blade resistance to the cracking and fracture associated with FOD. The Air Force authorized the development of production laser peening for all F101 first-stage fan blades, and the B-1 returned to service without further FOD-related engine failures.

While the Air Force was the first to adopt laser peening for component enhancement, they wouldn’t be the last. The following decade saw an expansion of laser-peening adoption, led by Ohio-based LSP Technologies Inc. (LSPT). LSPT was founded in 1995 by a group of those same Battelle engineers that developed laser peening, who were seeking to commercialize the process for widespread use in manufacturing and to develop commercial laser-peening equipment. The company expanded the LSP market into the commercial aviation and power-generation industries, and they used laser peening to address metal fatigue within the medical, manufacturing and automotive sectors. LSPT has recently partnered with Hepburn and Sons LLC of Manassas, Va., a maritime engineering consulting company, to transition laser-peening technology to the U.S. Navy and maritime industry.

Maritime through the NSRP

Laser peening is actively being transitioned into the maritime industry through coordination with the National Shipbuilding Research Program (NSRP), an industry-led, Navy-sponsored collaboration of U.S. shipyards. Hepburn and Sons is the prime contractor working for the NSRP (www.nsrp.org) to study several applications of laser peening throughout the construction and repair of Navy vessels.

Extending the lifetime of components and critical parts (such as propulsion shafts), which are the forcing functions for the repair and overhaul periods, allows vessels to spend more time at sea and less time in shipyards. Figure 4 is a photograph of a propulsion shaft during routine maintenance and repair at Collins Machine Works.[2]

The Navy and NSRP shipyards and maintenance facilities are gaining interest in this successful transition of laser peening into their field. They anticipate return on investment (ROI) similar to what has been realized over the last decade in aerospace as a result of the decrease in total life-cycle cost and improved design quality.

The residual compressive stress that laser peening imparts can also be applied to metal parts to “cold” form compound curvatures that would otherwise require press forming, hot working or weld joining. Compound-curvature shapes in aluminum ship construction are often pre-formed into rough shape and then transported to be fitted within the shipyard. It is during fitting that the required final compound curvatures are achieved using laborious trial-and-error brute-force mechanical methods (strong back, wedges, horseshoe clips, hydraulic porta power cylinders, etc.).

Figure 5 shows aluminum test coupons that have been laser peened with multiple layers, illustrating the ability to impart curvature into metal parts. Compound curvatures are achieved by applying predetermined patterns and layers of laser peening as illustrated in Fig. 6. to reap its many benefits.

The use of aluminum for ship applications such as deckhouses has resulted in significant cases of stress corrosion cracking (SCC). SCC requires three specific elements: material, such as aluminum 5456, that is sensitive to corrosion; corrosive environment, such as salt air and water; and exposure to tensile stress. In the use of aluminum on marine vessels, the first two elements are present, so the best protection against SCC is eliminating tensile stress as best as possible and replacing it with protective compressive stress by laser peening.[3]

Hepburn and LSPT are currently researching and experimenting with 3D-scanning technologies used for shipyard metrology and dimensional control for laser peening. The team is in the middle of a one-year project working closely with the Navy and participating shipyards to scan parts, develop laser-peen forming algorithms and form complex geometries for the maritime industry. Scanning results in 3D point clouds, which are then compared to drawings for difference calculations (Fig. 7.). The research involves evaluating multiple scanning methodologies with the shipyards while also evaluating 3D cloud software tools, which may need further development, specifically for shipbuilding.

As 3D-scanning technology continues to become ubiquitous, the team hopes to mature the integration of scanning and laser peening into an automated process. Hepburn and LSPT offer training seminars on laser peening, and they often attend aerospace and maritime conferences to share this superior surface treatment and forming method. The team is also working very closely with the American Bureau of Shipping (ABS) and the Navy to certify the use of laser peening for shipyards. The team-member websites and contacts are listed below.

Is Infrared Right for Your Part?