This website requires certain cookies to work and uses other cookies to help you have the best experience. By visiting this website, certain cookies have already been set, which you may delete and block. By closing this message or continuing to use our site, you agree to the use of cookies. Visit our updated privacy and cookie policy to learn more.
Home » Oxidation Behavior of Commercial High-Temperature Alloys
Heat & Corrosion Resistant MaterialsSintering/Powder Metallurgy
Heat & Corrosion Resistant Materials/Composites

The behavior of high-temperature alloy constructions used in oxidizing environments is important for processes like PM sintering and thermal processing of advanced steels. Degradation of components like muffles, retorts, baskets and furnace rollers represents large costs, and high-temperature corrosion along with deformation of such components present a large challenge to equipment builders and process owners.

This article describes the most important degradation mechanisms of high-temperature alloys based on exposure of 21 commercial alloys at 1100°C and 1200°C (2012°F and 2192°F) for up to 1,000 hours. Application and lifetime of commercial alloys for high-temperature components in oxidizing environments is mainly controlled by two important material properties: oxidation/corrosion behavior and mechanical strength/structural integrity.

At high temperatures and at lower mechanical stress levels, the oxidation process becomes the most important lifetime-limiting factor. Although a vast body of scientific research on high-temperature oxidation exists, there is unfortunately not much available comparative information on commercial alloys, especially not in combination with a deeper analysis of the mechanisms that control their behavior.[1,2,3] This article presents comparative data and some of the basics for understanding the behaviors. A more comprehensive presentation of the findings is published in the scientific magazine Oxidation of Metals during 2017.

All high-temperature alloys for use in oxidizing environments base their high-temperature resistance on the formation of protective oxide scales that lower the reaction rate. The more commonly applied design strategy is to form chromia, but a smaller but growing number of alloys use alumina-scale protection. Our investigation highlights the difference and the potential of alumina-based protection.

Materials were collected from commercial sources, and more information about the alloys is available on the homepages of the producers.[4] Analyzed chemical compositions are shown in Table 1. Materials are listed in order of increasing Ni content. The samples were ~2 x 10 x 20 mm coupons ground to 500 mesh on all sides. 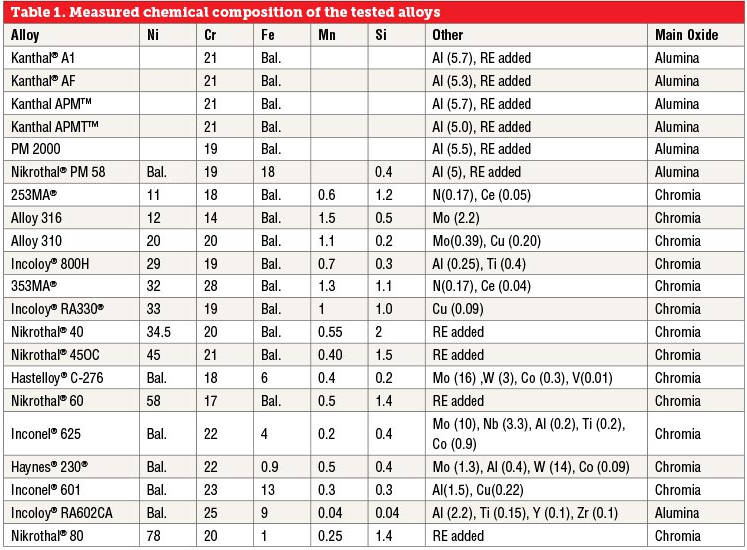 The samples were placed in stabilized alumina crucibles, and the exposure was done by inserting and removing a tray with all samples from a hot laboratory chamber in 100-hour cycles. The exposure was interrupted at 1,000 hours or at the onset of catastrophic oxidation. Of course, 1,000 hours is a relatively short exposure time from an industrial perspective, but it was long enough to reach catastrophic oxidation on several alloys at both temperatures. The visual appearance and weights were monitored after each cycle.

The recorded weight changes were gross mass gain (crucible including sample and its spallation) and spallation (crucible with spallation but with sample temporarily lifted). See figure 1 for a schematic explanation of the parameters. The net weight changes of a sample itself includes pick up of oxygen (or other oxidants) from the atmosphere and loss of solid particulates (spallation) and volatiles. Therefore, it is not very useful as an indication on its own. For this comparison, we have chosen gross weight gain and spallation as the main parameters to follow since these parameters together give a very good measure of what actually happens.

Loss of volatiles presents an uncertainty in the gross mass-gain numbers for the chromia formers.[5] A large fraction of these, however, were collected on the walls of the crucibles and are a part of the spallation number.

Samples were examined after exposure and on a separate sample exposed to only a single 100-hour cycle.

The measured values for the 21 alloys are shown in figure 2. All alumina formers and some chromia formers will have an oxidation-limited lifetime substantially longer than the 1,000 hours under the test conditions. This means that the differences in oxidation behavior between the alloys in terms of oxidation-limited lifetime is very large and exceeds more than an order of magnitude.[3] Polished sections investigated in SEM are shown in figure 3, all at the same magnification. Note that alloy 316 is excluded due to its too-excessive oxidation.

The alumina scales are generally dense and give minor spallation under the test conditions. The chromia formers, on the other hand, show a very large spread in oxidation performance. The best alloys show relatively small spallation and close to parabolic oxidation kinetics. Looking at the outcome in gross oxidation behavior, some features are clearly important.

A high Ni content is generally a positive factor, but there are large deviations from this rule. Alloys may have similar levels of Ni and Cr but still show a large difference in oxidation behavior.

The ability to form silica as a subscale plays a key role as is evident from the microstructures and the mass gains. Beneath a Cr-rich outer oxide, a more or less discontinuous layer of silica is apparent on the alloys with better kinetics.

Several chromia formers contain some levels of Al, and Al-rich oxides beneath an external chromia scale are evident in some of the alloys with better kinetics.

Spalling is negative for the users of high-temperature components since it affects the surrounding of the surface (e.g., in industrial heat-treatment processes). Spalled oxide contaminates heated goods, creates shortcuts in heating elements, clogs gas passages, etc. It also correlates strongly to the total amount of oxidation since each spall event results in a thinner protective scale and therefore a larger oxidation rate.

Internal voids were formed in several of the chromia-forming alloys, and the number and size of these voids relate to the amount of gross mass gain and the consumption of the scale-forming elements (i.e., Cr and Al). For example, see the sections of Alloy 625 in figure 3 (online only).

Based on the behavior, the oxidation process in terms of primarily Al and Si levels may be grouped in five main categories or alloy design strategies, of which I-IV are more successful (Table 2). 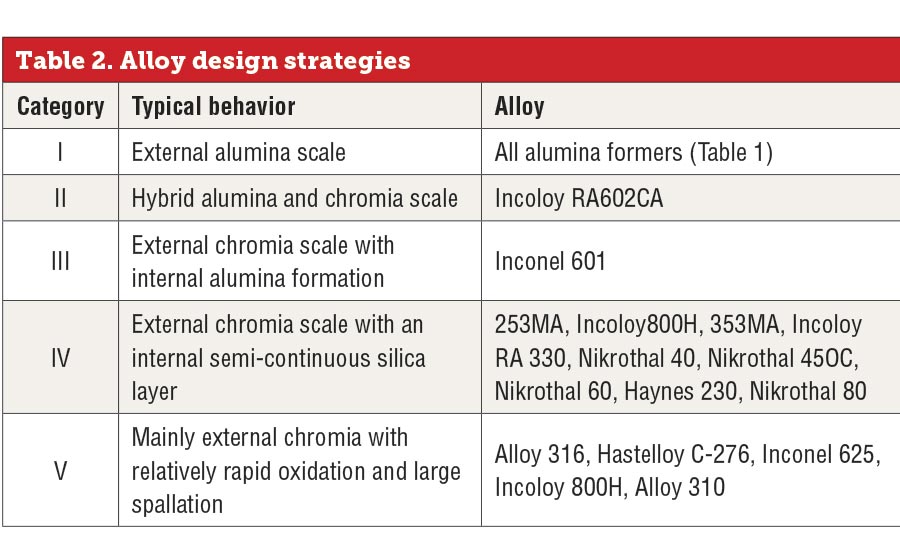 It can be concluded that alumina formation (I) is by far the best from an oxidation point of view, followed by IV. Chromia with internal silica in combination with a high Ni content (IV) can be an effective strategy even at 1200°C, whereas I, II and IV, even at lower Ni content, can give low oxidation rates at 1100°C.

Strategy III (exemplified by alloy 601) gives faster kinetics when compared to some of the other alloys with similar Ni content at 1100°C but works somewhat better at 1200°C in relative terms. As evident from the weight-gain numbers, some alloys (V) show comparatively rapid oxidation and large spallation under the test conditions.

At both tested temperatures – 1100°C and 1200°C – the gross mass gains, amount of spallation and emittance of volatiles show that alumina formation gives by far the best protection. This holds true for the tested ferritic and austenitic alloys.

Some chromia-forming alloys nevertheless show protective oxidation even at 1200°C, but there are extremely large variations within the group. Morphology of the scales and chemical analysis of the oxidation zone show that high Ni content generally is a positive factor, as expected. Si and Al also play a very important role in terms of gross oxidation and spallation, which override the impact of Ni content in several cases. At 1200°C, alloys with high-Ni content and Si additions show relatively protective behavior, but most chromia-forming alloys suffer from relatively rapid oxidation, extensive spallation and emission of chromium-containing volatiles.