How Industry 4.0 will Impact Industry

Do you remember the Luddites? Not the neighbors down the street, but the rabble rousers in England in November 1811.

Merchants who wove cloth were looking for ways to cut costs, and one smart fellow came up with a weaving machine (called a frame) to improve output sixfold. Then another built and installed a coal-fired engine to propel dozens of these frames. As a result, poverty rose as wages dropped and workers were no longer needed.

Then men calling themselves Luddites got steamed and destroyed master weaver Hollingsworth’s six frames and burned down his house. By April 1812, $2 million in frames and businesses were destroyed. Luddites said they were not annoyed with the technology but wanted some minimum-wage laws enacted. So, Parliament enacted a law prohibiting the violence; within 15 months, 24 Luddites were caught and hanged.

The point here is that technology transitions can pose problems. It seems that “technological unemployment” is increasing in our world, both in America and abroad. There is debate among economists on both the extent and duration of this phenomenon, but most agree that innovation is boosting pay for higher-skilled workers while having a more negative impact on low- to medium-skilled workers. In fact, some credible academic studies predict that computerization could make up to half of current jobs redundant within the next two decades.

A new term, Industry 4.0, has entered the vernacular, and readers of this journal, their suppliers and customers will be impacted by this “digitization and integration” technology. It is certain to transform manufacturing sectors, operations and supply chains via robotics and artificial intelligence in nearly unfathomable ways. Some predict that 10% of all items produced will be 3D printed by 2027. In a survey of U.S. industry, responses by executives indicated 86% approval of these Industry 4.0 concepts.

See the table for “Percentage of Use” by various industries, both now and in five years. 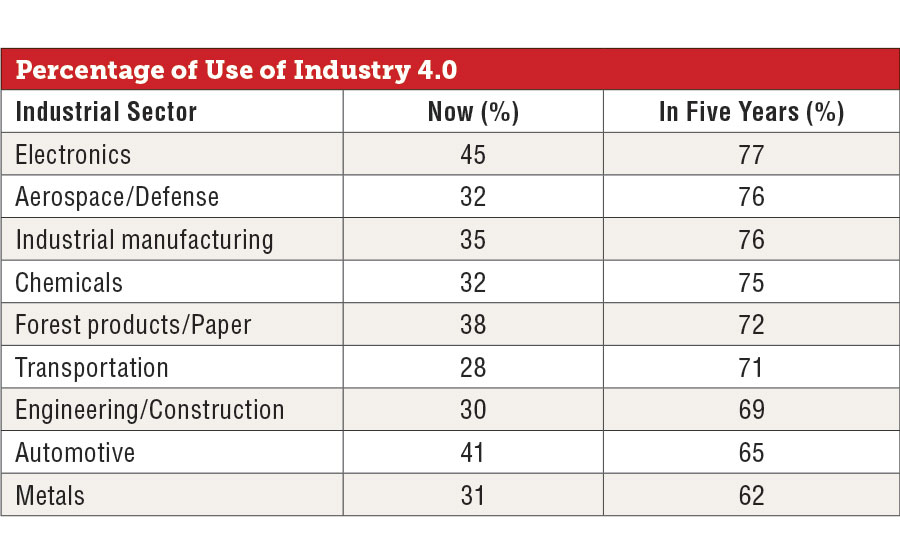 It is my contention that there are two fundamental issues that will further impact society due to these Industry 4.0 changes:  changing education levels in our country; and government as an employer and interventionist. These matters are very much related.

America already has faced a strong decline in quality of education. This has been exacerbated by the government’s intervention in processes at all levels and union control of schooling to create a political scene in education. So, young people are less prepared to live and work in the Industry 4.0 world. Indications are that U.S. education performance lags other nations that face similar problems with industrial change.

What all this indicates is the clear need to be aware of such changes occurring on the private-sector industrial landscape and to focus knowledgeable instructions on government leaders to change the trends that are not beneficial for our nation. It is an enormous challenge but one that cannot be faced any other way than by concerned and informed citizens speaking bluntly to political leaders.

Industry 4.0 and the 7 Key Considerations in Heat Treating

At the Intersection of Technology and Industry 4.0

Failure Analysis for our Times: Fracture of a Punch with Confusing Features

Check out the February 2021 issue of Industrial Heating, featuring an editorial on Brazing vs. Braze Welding, along with Better Refractory Formulations through Accelerated Scientific Discovery.