The Sporting Arms and Ammunition Manufacturers’ Institute Inc., also known as SAAMI, is an association of the nation’s leading manufacturers of firearms, ammunition and components. SAAMI is the American National Standards Institute-accredited standards developer for the commercial small arms and ammunition industry. SAAMI was founded in 1926 at the request of the federal government and tasked with: creating and publishing industry standards for safety, interchangeability, reliability and quality; and coordinating technical data to promote safe and responsible firearms use.

The story of SAAMI’s rimfire firing-pin indent copper crusher describes the reinvention of one of the most important tools in the ammunition and firearms industry (Fig. 1). This article explains the purpose and operation of the rimfire firing-pin indent copper crusher and how an unusual chain of events almost led to the disappearance of this simple but important technology.

In order to discuss the rimfire copper crusher, we need to take a step back and first explain what rimfire ammunition is and how it works. There are two categories of primer ignition systems (Fig. 2) used in ammunition cartridges: center-fire and rimfire. In the center-fire design, the primer that ignites the powder is located in the center of the rear of the cartridge, and that is where the firing pin strikes it. In the rimfire design, the interior of the projecting rim of the cartridge is filled with a primer paste, where the firing pin strikes it to ignite the powder.

The rimfire was the first widely available metallic cartridge. Invented in France in 1845 by well-known gun-maker Nicolas Flobert, it gained widespread use in the 1860s and was soon manufactured by over 20 different companies. The rimfire design is limited to lower-pressure calibers because the brass case must be thin enough to allow the rim to be easily crushed to ignite the primer. This thin design is unable to withstand the higher pressures generated by the ammunition. Center-fire cartridges can utilize a thicker case, allowing higher chamber pressures and increased bullet velocities.

The primary advantage of rimfire ammunition is low cost, typically one-fourth that of center fire. It is less expensive to manufacture a thin-walled casing with an integral-rimmed primer than it is to seat a separate primer in the center of the head of the casing.

The most common rimfire ammunition is the 22LR (22-caliber long rifle). It is considered the most popular round in the world and is commonly used for target shooting, small-game hunting, competitive rifle shooting and, to a lesser extent, personal defense (due to its low stopping power). Rimfire ammunition cannot be easily reloaded, whereas center-fire brass can be resized and reloaded multiple times. The low cost of 22-caliber rimfire ammunition makes it highly attractive to a wider range of plinkers and hobby shooters.

As rimfire ammunition became more widely used, interchangeability of ammunition among different arms-makers became critical. This required firearms and cartridges to have standardized and repeatable firing characteristics. Both firearms and rimfire ammunition manufacturers needed a way to analyze and predict the parameters affecting proper ammunition firing. Today, when SAAMI’s Technical Committee approves specifications of a cartridge – whether 22 Winchester Magnum Rimfire or 7mm Remington Magnum – shooters can be assured their ammo will chamber and fire properly.

Of particular interest in the 22-rimfire were two variables: barrel chamber pressure generated by the cartridge and firing-pin indent caused by the strike of the firing pin on the rim of the cartridge (to allow standardization to accommodate the different firearm manufacturer’s firing-pin profiles and firearm design). The copper-crusher measuring system refers to two different tests used to quantify both of these variables, and both rely on the repeatable deformation of high-purity copper. Although the same name is used for both tests, they are distinct and separate test methods.

In order to ensure consistent and standard design of ammunition, it is necessary to measure the barrel chamber pressure (Fig. 3) generated by ignition of ammunition cartridge powder in the firing chamber of a barrel. This allows ammunition manufacturers to ensure and demonstrate that their product meets recognized industry standards. The copper-crusher measuring system serves this purpose for both 22 and larger-caliber ammunition.

Major Rodman an American army officer and renowned Swedish chemist Alfred Nobel developed the copper-crusher pressure-measuring system in the mid-1800s simultaneously. Rodman’s invention, the crusher system, is still in use.

The crusher system uses a small bar (crusher bar) of copper (Fig. 4) mounted between a stationary anvil and a small cylindrical piston fitted over a hole drilled in the barrel of a test gun (Fig. 5). Upon firing, the crusher bar is compressed slightly due to the force of the blast on the cylinder, which is transferred to the bar.

Currently, only two copper crushers – 0.146 x 0.400 inch and 0.225 x 0.500 inch – are specified for pressure testing. The difference in crusher-bar length before and after firing is measured and then converted mathematically to a pressure, in units of CUP (copper units of pressure). It is important to realize that CUP cannot be interchanged with another common unit of pressure, namely pounds per square inch (PSI). Of interest to us in this article is the copper-crusher bar.

For example, SAAMI lists the maximum average pressure for 243 Winchester cartridges as 52,000 CUP and 60,000 PSI. Most cartridges show similar discrepancies between the two units of measure, and there’s no easy way to convert CUP to PSI since the compression of the copper is limited by the time required for the copper to compress (i.e., a longer duration, lower pressure can compress the copper as much as a shorter duration, higher barrel pressure).

The use of the copper crusher for pressure measurement is rapidly giving way to the quartz crystal piezoelectric pressure-measurement system, which is less time-consuming and more precise than the copper-crusher system. The copper crusher is still employed by ammunition manufacturers, typically in instances of low production-volume cartridges where the copper-crusher system test equipment currently exists and the cost to convert cannot be justified. This methodology of barrel pressure measurement is therefore still essential to the industry.

The second variation of the copper-crusher measuring system is used to measure firing-pin strike force. The firing-pin mechanism consists of some variation of either a spring-powered firing pin (striker) or a hammer that, upon pulling the trigger, is released to strike the firing pin, which then strikes the rim of the cartridge. This, in turn, initiates the primer that instantaneously ignites the powder and fires the round.

In order to ensure consistent firing-pin design, it is necessary to quantify the force with which the pin impacts the rim of the cartridge. This allows firearms manufacturers to ensure and demonstrate that their product meets a known industry standard in regard to firing-pin design. A uniquely configured copper-crusher system serves this purpose.

The copper crusher measures firing-pin load pressure using a solid bar machined of high-purity copper, from which the mini copper bars are sliced and machined to the exact size and shape of the many rimfire cartridge designs (e.g., short, long rifle, magnum). A single copper indent crusher is placed in the firing chamber of a firearm and the trigger is pulled, causing the firing pin to strike and leave an indent mark on the rim area of the copper crusher. The copper crusher is then removed and the indentation measured (Fig. 6). The indentation must measure 0.014 inch (read to the nearest 0.0005 inch) with only a 0.001-inch variation to indicate a passing indentation test.

Copper Used in the Crusher

Both variations of the copper-crusher measuring system (to measure barrel pressure and firing-pin impact force) rely on mechanical deformation of a copper bar. In order to provide consistent results, the copper used in the crusher must have very specific yield stress, elastic modulus (Young’s modulus) and other physical properties (Table 1). 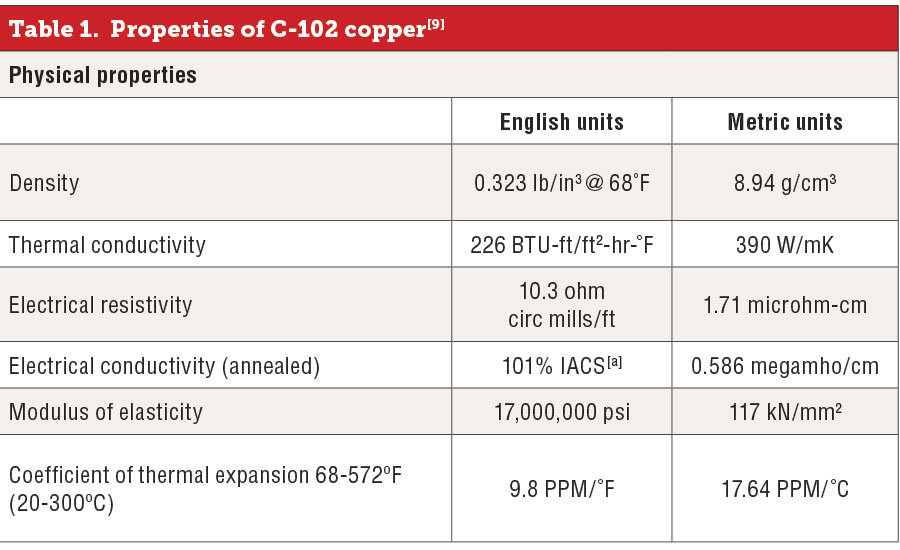 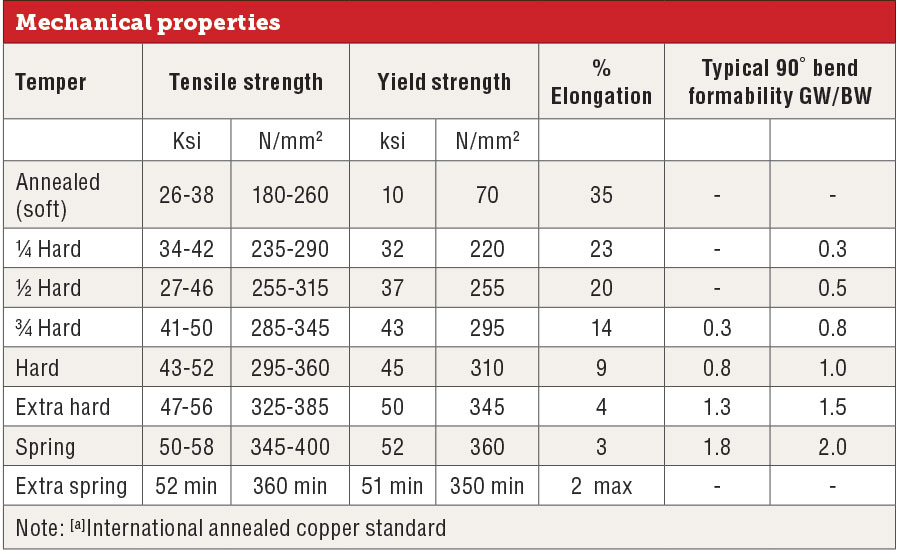 It is critical that different copper-crusher bars manufactured at different times do not vary significantly in regard to their metallurgy. Crusher bars are made from 99.95% oxygen-free C-102 copper, which is the purest form of copper commercially available.

After being extruded from raw copper bar and machined to the proper tolerances, the material is heat treated in a vacuum furnace under a very strict protocol. Due to the limited demand for copper crushers by arms- and ammunition-makers and the extreme purity of copper required, over the years only one supplier for copper-crusher bars remained in the industry, the Olin Corporation.

In World War II, Winchester-Western made major contributions to Allied Forces by manufacturing 15 billion rounds of ammunition and also helping in the development of the U.S. 30-caliber carbine and .30-06 M-1 Garand. By the end of the war, Winchester-Western employed 62,000 people, including those at plants operated for the government.

Based on its historical expertise in copper and brass manufacturing, Olin Corporation became the premier U.S. manufacturer of high-purity copper and began supplying the copper bars used in the copper-crusher measuring system(s). Although critical to the firearms industry, the volume of crusher bars consumed by the industry was not sufficient to justify consistent production. Instead, Olin produced batches of several million, which satisfied the industry for more than 10 years at a time.

In 2011, firearms and ammunition manufacturers began to make inquires to the SAAMI Director of Technical Affairs to coordinate another production run of rimfire firing-pin indent crushers. It had been almost 20 years since the last run, and the industry’s inventory was diminishing. Without copper crushers, these companies could not qualify 22-caliber rimfire firing-pin indentation depth.

SAAMI planned to schedule another production run, but two obstacles became immediately apparent. First, Olin Winchester no longer had the capability to produce the rimfire indent crushers. Second, as a result of the periodic industry demand and the long time span between production runs, the material and production files for the previous production runs had long been archived or, in some cases, disposed of in accordance with record-retention policies.

The material technical data package, engineering specifications and vendor information records for the last production run in 1997-1998 were scant at best. While related correspondence referred to the metallurgical issues and the potential means to resolve them, the processes suggested were incomplete and unclear. Further research of past records made it clear that the material technical data package was lost to history.

This turn of events would be devastating to the industry. If the technology to manufacture the rimfire firing-pin copper crusher was not recovered, the U.S. manufacture of rimfire ammunition and firearms could be very adversely affected.

In Part 2 we will see if the technology used to manufacture copper crushers was reinvented!