I contend that the outcome of the 2016 elections and industrial job futures are interrelated. It all comes down to the declining educational competence of citizens. This subject’s history and predicted future are briefly discussed here.

Only half of U.S. children were enrolled in school in 1900, and only 6% of 17-year-olds graduated from high school. This latter figure rose to 30% by 1930 and 50% by 1950. Between 1960 and 1990, spending on public-school education doubled, but disquiet in the quality of public schools and the growing lack of focus on results became issues in the public eye. Concurrently, from 1960 through today, teacher associations, unions and government agencies grew in control and inhibited most public education reforms … while society was/is being distorted by rapidly changing social and cultural trends.

Public education, once designed primarily to impart skills and knowledge, took on political and social tasks to inculcate objectives about racial integration, social tolerance and environmental awareness. President Reagan balked at these trends and sought to eliminate the Department of Education, wanting to leave state and local government in control. Instead, an education bureaucracy and unions took hold. From 1955 to 1990, the average pupil-teacher ratio dropped by 40%, annual expenditures per pupil exploded by 350% to $5,237 and public-school teacher salaries rose 45% (adjusted for inflation).

By 1986, only 6% of 11th graders could solve multi-step math problems and use basic algebra; 60% did not know who wrote or why The Federalist was written; and 75% did not know when Abraham Lincoln was President. Meanwhile, teacher unions (with tenure and salary for mediocre instructors) gained solid control of public education. Pupil-staff ratios have dropped from 18 to 1 in 1960 to 8 to 1 in 2010. To put it nicely, the U.S. federal monopolistic, over-regulated, bureaucratic system of public schools is woefully unprepared to meet modern society’s needs. And it costs far too much.

This failure in public education has prompted the Association of American Colleges & Universities to examine results of education in terms of surveyed perceptions of students and employers regarding student’s preparation for employment. Of 615 interviews, the percentage of those well prepared for work (applying knowledge in work settings, critical thinking, written and oral communications) shows wide perception difference between students and employers (see Table). These findings are an embarrassment for American public education. 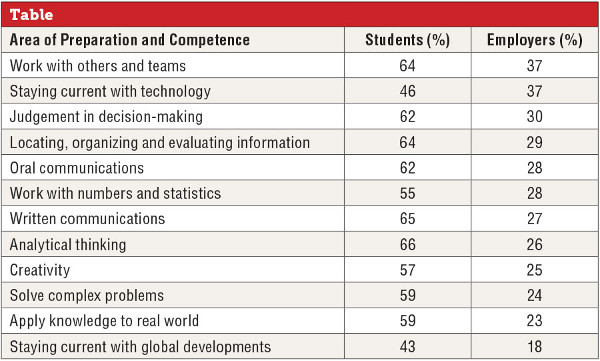 What this all means is that a larger and larger portion of the population over the last 50 years is less and less able to analyze and determine what is best for America in a Presidential election or in House and Senate races (or insist that school boards relieve or fire non-performing public-school teachers).

Furthermore, what all this means is that industrial America needs competent employees for operation and survival but has an existing and rapidly growing problem. My advice is to talk to your local government and require that this “wrong world” be set “right.”  If you don’t, who will? And if you don’t, America loses.

The Ultimate Capacity Builder for Your Heat-Treating Operations

Nanotechnology and the Environment

The Ins and Outs of IR: Efficient Curing with Infrared

The Next Chapter in Your Sustainability Story: Thermal Processing Solution

Join this webinar to learn more about the solutions that are available today to help achieve your sustainability goals.