This website requires certain cookies to work and uses other cookies to help you have the best experience. By visiting this website, certain cookies have already been set, which you may delete and block. By closing this message or continuing to use our site, you agree to the use of cookies. Visit our updated privacy and cookie policy to learn more.
Home » Improving Energy Efficiency with Recuperative and Regenerative Burners
Industrial Gases & Atmospheres
Cover Feature | Industrial Gases/Combustion

Using a thermal-capture burner is the single-most-important factor in getting the most energy out of each dollar you spend on fuel. Understanding how this works can help you pick the right burner for your application. The Excel burner model in downloadable workbook AirPreheatCalc2 is a good way to make calculations on potential energy savings. This article continues the discussion begun in April’s article, “Improving Energy Efficiency with Thermal-Capture Technology.”

Readers of Industrial Heating are well aware of the potential for energy savings by using thermal-capture burners for process heating.[1,2] The net available heat (NAH) and heat to load (HTL) are often-used parameters to indicate thermal efficiency.[3] Equations [1] and [2] define these terms in percentages with respect to the firing rate. The HTL is the NAH minus heat loss. 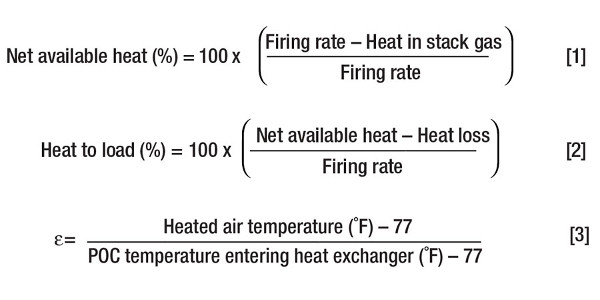 Table 1 shows the heat-balance results for a burner firing at 500,000 BTU/hour (lower heat value, or LHV) into an 1800°F furnace. With unheated air, the products of combustion (POC) take 47% of the combustion heat out of the flue, so the per-burner HTL is 211,110 BTU/hour (42% of the firing rate). Switching to a thermal-capture burner to preheat air to 900°F recovers enough heat to allow a firing-rate cut of 25% for the same HTL. The stack-gas temperature drops by 620°F and its flow by 1,590 scf/hour. Note the multiplier effect of air preheat: the stack gas has both a lower temperature and flowrate. Figure 1 and Table 2 show fuel savings for a range of air preheat temperatures. Clearly, higher air preheat temperatures provide greater savings.

There are other ways to save energy,[4] but preheating the air is usually the most effective because of the multiplier effect – every BTU added to the air means 1.9 less BTU needed from fuel with a corresponding decrease in the amount of CO2 emitted in the stack gas.

The gain in thermal efficiency compared to unheated air can be calculated two ways: first, the fuel required for the same load output (i.e., constant HTL, as in Table 1 and Fig. 1); second, the increased output obtainable from the same fuel input (i.e., higher HTL). The analysis in this article emphasizes the first scenario – saving energy by decreasing the firing rate at constant HTL.

You can figure all this out by using an Excel model (workbook AirPreheatCalc2.xlsx), which is downloadable from the online version of this article. Worksheet Basic allows the user to independently set the air preheat temperature, while worksheet Extended calculates the air preheat temperature based on a burner’s particular specification of 25 different factors for three different burner configurations. The results can replace multipage charts and tables found in typical combustion handbooks.[5] The workbook also contains specification sheets for commercially available direct-fired burners and additional documentation on burners and practices to improve thermal efficiency.

Recuperators operate steadily with counter-current flow while transferring heat directly across a conductive membrane. Regenerators operate indirectly by alternate storage and removal of heat in a media bed.[6,7] Burners are designated as self-recuperative or self-regenerative when the heat exchanger is integrated into the burner design and are more efficient and simpler than external devices. Regenerative burners are particularly appropriate for high-temperature applications (1650-2350°F/900-1288°C) with air preheat temperatures ranging from 50-80% of that of the hot products of combustion (POC). Direct-fired burners divert 10-20% of the POC to the flue to enable the furnace to maintain furnace pressure to minimize air leaks.

Figure 2 shows a diagram of a self-recuperative burner.[8,9] Heat is transferred from the hot POC to the membrane by convection, through the membrane by conduction and then to the air by convection. A direct-fired self-regenerative burner employs two ceramic-media beds – one for heat storage and another for heat release. POC passing through a storage bed transfers heat to the media, while combustion air is heated by passing through an adjacent release bed. When the storage bed is fully heated, the gas flows are reversed, and the storage bed becomes the release bed.[11] Figure 3 shows a diagram of a self-regenerative burner in the heat-release mode.

A burner’s performance can be described by its effectiveness in transferring heat from POC to air. Equation [3] defines the relative air preheat factor ε (i.e., the burner’s figure of merit). Values of ε are available from burner manufacturers.

A zero value of ε means no air preheat, while a value of 1 means the air reaches a temperature equal to that of the POC entering the heat exchanger. Typical self-recuperative burners have ε values between about 0.5-0.6, while regenerators can attain ε values up to 0.9. Although worksheet Extended in workbook AirPreheatCalc2 treats ε as an independent variable, ε depends somewhat on burner operation, being slightly lower at higher firing rates.

Figure 4 shows burner efficiency (i.e., % NAH) over a range of POC temperatures for the two burner types compared to no air preheat and the maximum theoretical air preheat. The lines on Figure 4 are broadened to indicate the variability of ε with firing rate and other system variables.

Comparison of Recuperators and Regenerators

Table 3 summarizes the compared advantages and disadvantages of the two types of heat exchangers. Use of one type versus the other is application-dependent and based on the costs of the device, installation and maintenance. The table is not comprehensive, so you will need information from vendors to evaluate performance against costs and projected equipment life. However, either choice will provide beneficial results.

Air preheating creates a hotter flame temperature and lowers the POC flowrate. The first change causes an increase in NOx gas species, and the second change decreases the convection heat transfer to the load. Let’s look at ways to resolve these two undesirable consequences.

Thermal NOx refers to a mixture of NO and NO2, consisting primarily of NO. These gases play a role in the formation of smog and ozone, and their emission is limited by federal and state EPA regulations. The principle factors influencing NOx concentration in the POC are temperature and % excess air. The hottest POC occurs in the flame, which may approach the adiabatic flame temperature. Figure 5 illustrates the dominating effect of temperature.

The second issue arises because the amount of POC decreases with air preheat (Table 4). This decreases the hot POC flow velocity and the heat-transfer rate to the load, and it may fail to adequately stir the blanket gas. This can harm product quality or production rate if parts of the load don’t reach or maintain the desired temperature.

The NOx factor can be alleviated by lowering the flame temperature by entraining furnace blanket gas or creating two different combustion zones with different air/fuel ratios.[12] Where convective heat transfer dominates the process, the lower POC flow can be alleviated by changing to a high-velocity flame (pulse firing) to replace modulated firing rates.[13]

We’ll go into detail on control strategies for both factors in a special online exclusive. See the information at the end of the article.

Preheated combustion air savings of up to 60% versus using unheated air[14] are validated by calculations in Excel workbook AirPreheatCalc2. The choice of recuperators or regenerators depends on the factors listed in Table 3. Benefits include:

NOTE: Art Morris has also contributed a web exclusive that accompanies this article. You can read "Operational Control of Thermal Capture Burners" by clicking here.