Nonferrous is Big and Getting Bigger

February is our focus on nonferrous materials and processing. There seems to be a lot of nonferrous news lately, and we’ll do our best to pass it along.

On Monday, Jan. 12, Alcoa held a public meeting to discuss 2014 and look forward to this year. Through the marvels of technology, we “sat in” on this meeting. It was a good year for Alcoa and other aluminum manufacturers after several not-as-good years. The growing usage of aluminum (more on that later) has resulted in an increase in aluminum prices of 27% since February 2014. For Alcoa, this resulted in a 14% increase in revenues last year. In the fourth quarter, their cash from operations was the highest in Alcoa’s history. Adjusted earnings in 2014 was the highest experienced since 2008.

Alcoa CEO Klaus Kleinfeld predicted 7% global growth in 2015. Kleinfeld highlighted six different industry segments, predicting some growth in each. Aerospace is expected to be the largest at 9-10%. Keep an eye on their Micromill™ process for the next generation of aluminum sheet.

Automotive is certainly a large reason for the growth in aluminum demand. Ford introduced its all-aluminum F-150 this fall, and as I write, the F-150 was taking the truck-of-the-year prize at the 2015 North American International Auto Show in Detroit. How much higher is the price of the truck due to aluminum? We have seen different numbers from $395 to $3,000.

GM’s 2014 Corvette Stingray and 2015 Z06 convertible are using an all-aluminum frame with cutting-edge joining technology. GM has patented a process for resistance spot welding, which is incorporated along with laser welds, structural adhesives and machined fasteners. Incorporating aluminum in such a demanding application would not be possible without recent advancements in computer-aided engineering software. More than 17,000 frame iterations involving 186,000 computational hours were required to develop the aluminum frame.

The surge in aluminum demand is due in part to aluminum-lithium alloys. These are described in this month’s Heat Treat Doctor® column. As Dan Herring mentions, the alloy is being used on NASA’s Orion crew module. Increased demand for Al-Li will continue to be a boon for Alcoa. Kleinfeld mentioned that the FAA recently certified Al-Li for Pratt & Whitney’s PurePower® engine.

A recent report indicates that the global aluminum alloys market is expected to grow at an annual rate of 4.8% from 2014 to 2020. The need for recycled aluminum alloys is also expected to experience a rise. Globally, the key players driving the aluminum market are Aluminum Corp. of China Ltd., United Company RUSAL Plc, Norsk Hydro ASA, Alcoa Inc. and Dubai Aluminum Co. Ltd.

As 2015 unfolds, we encourage you to pay attention to new regulations and executive orders that may affect your business. We warned everyone in this column last year that the current administration may begin to move with a new sense of urgency in their last days. In the first seven days of 2015, 300 new rules were unveiled, according to federal data (www.regulations.gov). Included are proposed EPA air-quality standards for lead and National Ambient Air Quality Standards for Ozone.

A major, not-yet-finalized rule is the EPA’s carbon dioxide emissions limits for new power plants. The rule would limit the amount of CO2 that can be emitted by newly built facilities. The limit is so low that it could only be met by coal plants if they use carbon capture and storage (CCS) technology, which has yet to be used on a commercial scale without government subsidies. What will this do to energy costs, and how will that affect our energy-intensive industry? Stay tuned. 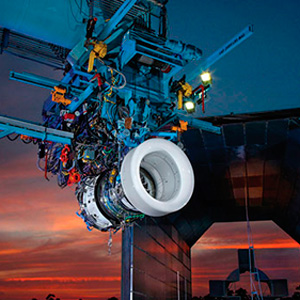 The Iron Furnace: Seed of the Industrial Age

Nonferrous is not Just Lightweight News