In this article, we present an introduction to the general points of aluminum brazing. A brief description of two of the three most-used processes is also discussed:brazing in an inert-atmosphere furnace with flux (it is necessary to purge by vacuum at the beginning of the cycle) and brazing in a vacuum furnace without flux.

The world of aluminum brazing uses different processes that can be divided into two large families: with flux and without flux (Table 1). The fluxes that are used for aluminum brazing are very corrosive mixtures that require rather heavy and expensive effluents to be processed.

Just like all other brazing, aluminum brazing allows the assembly of components that consist of a “basic” alloy by means of a soldering alloy whose melting point is lower than that of the base material. The filler metal is inserted between the elements to be brazed in the form of a strip or roll bonding on the base material.

The filler metal melts at brazing temperatures of 580-620°C (1076-1148°F), but the base metal does not melt. The melted filler metal spreads out and fills the cracks between the elements to be brazed. The filler metal solidifies during the cooling period and forms the brazed joint between the surfaces of the different workpieces to be joined.

Aluminum is a highly oxidizable material. It develops a very stable oxidized layer on the surface – aluminum oxide (Al2O3). The filler metals do not wet this oxidized layer. It is thus necessary to suppress this layer prior to brazing and to prevent it from forming before the end of the melting and resolidification of the filler metal.

The suppression of the aluminum oxide layer can be achieved in-situ, generally by a chemical action (corrosive flux, base or acid attack, use of magnesium). A preliminary external preparation can also be obtained by means of a mechanical action (sanding).

Contrary to conventional brazing, the melting ranges of base and filler metals are very close. Certain alloys cannot even be brazed. Furthermore, the brazing method must make it possible to check the brazing temperature very accurately and guarantee a homogeneous thermal distribution within the load and on the pieces.

Can all aluminum alloys be brazed?

The magnesium content of the alloy to be brazed must also be taken into account. Beyond 2% magnesium, the generated oxide on the surface of pieces becomes too stable. In this case, braze welding must be avoided.

The following alloys can be brazed.

Nevertheless, these materials whose mechanical properties are obtained by means of cold working and annealing will lose part of these properties during the brazing operation, and this will be irreversible.

In all cases, brazing is followed by fast cooling and then natural or artificial aging.

Filler-metal alloys belong to the 4000 series. They feature low melting points and a limited liquidus-solidus interval. Their composition is therefore close to an aluminum-silicon eutectic (approximately 12% Si).

The alloys that are used more frequently are shown in Table 2.

The high magnesium content of alloys 4004 and 4104 facilitates the reduction of the oxide layer by the “getter” effect but reduces the wettability of the surface. These grades are mostly used in vacuum brazing without flux.

An alternative to the disadvantages associated with procedures that use a corrosive flux is provided by two other processes. One process uses a non-corrosive flux in a protective atmosphere, and the other uses vacuum brazing with magnesium evaporation.

Brazing with Non-Corrosive Flux in an Inert Atmosphere

The most common practice, including the Nocolok® process, uses a non-corrosive flux, potassium fluoroaluminate, of general formula K1-3AlF4-6 primarily in the form of KAlF4 and less in the form of K2AlF5. This product comes in the form of a white powder deposited in a fine layer on the assembly to be brazed. It is only active with aluminum in liquid form and does not interact with the substrate at ambient temperature.

The melting range of the flux is 565-572°C (1049-1062°F). Therefore, it melts before the filler metal and wets all surfaces. Its role is to dissolve the oxide layer and allow the filling by capillary action through the cracks between the surfaces to form the brazing joints. After the cooling period, the flux remains highly adhesive in the form of a fine layer.

Brazing requires an atmosphere that is devoid of any type of oxidants, oxygen and especially water. It is mandatory to avoid the reformation of a layer of oxide and hydrofluoric acid, which is corrosive for the brazed assembly. The equipment and conditions of the brazing cycle must make it possible to guarantee the conformity of the atmosphere. We generally consider that the atmosphere must meet at least the following conditions:

The mechanisms of this brazing process are composed of four successive phases.

The charge furnace allows the brazing of a lot of products, called a batch. The adapted furnaces belong to the BA4x series. They are of the type with a vacuum purge chamber to guarantee the atmospheric conditions that are necessary for brazing.

A cycle starts by a primary vacuum purge that evacuates the ambient air contained in the chamber. Once the required vacuum level is achieved, the nitrogen fills the enclosure. The resistors heat up the exterior of the chamber while the turbine provides the guaranteed convection of the caloric transfer toward the load and the thermal homogeneity in the useful volume.

Once the brazing has taken place, the chamber is cooled down by circulating air between the chamber itself and the insulating material by means of a ventilator. The interior of the chamber and the load receive accelerated cooling by an external module, including a turbine and exchanger.

The discharging of the hot machine is possible and often applied with the objective of gaining time if the work environment makes it possible to guarantee the safety conditions of the operator.

Vacuum brazing takes place under a pressure between 10-4 and 10-6 mbar. The efficiency of the process is based on the action of magnesium, which is either contained in the soldering alloy or comes from a separate source.

Magnesium has more affinity for oxygen elements than aluminum and, therefore, has a “getter” effect on the furnace atmosphere. At operating pressure, magnesium sublimates under the effect of the temperature. This sublimation produces vapors that consequently eliminate or considerably reduce any trace of oxygen and water that always remains in the brazing furnace even with a high vacuum.

The presence of magnesium vapors also helps break the oxide film that is always present on aluminum by reduction of the aluminum oxide. Magnesium, through contact, also has the effect of lowering the eutectic temperature of the filler metal (Al-Si).

As in the case of brazing with flux, the aluminum oxide layer crackles under the effect of the differential expansion between the aluminum oxide and the base metal beyond 400°C. Aluminum is very reactive with oxygen. If the slightest trace of oxygen remains in the furnace, oxide will form again. This will prevent the brazing from correctly wetting the metal to be brazed. By reducing the thin oxide layer that re-forms, magnesium contributes efficiently to the wetting process, the flow of the brazing and the quality of the joint.

A cycle starts by purging the atmosphere up to a pressure level in the range of 10-6 mbar. Once the required level of vacuum is achieved, the heating process starts under vacuum thanks to six heating radiation zones. Magnesium is then vaporized through the heating chamber by means of the “getter” effect, the thermal action of which is separated from heating the chamber. The remaining oxygen elements as well as the desorbent elements during the temperature rise are trapped by magnesium. At the same time, magnesium reduces the aluminum oxide layer that is present. Once the brazing stage at +/-3°C is reached, the filler metal liquefies and forms the brazed joint. Subcooling under vacuum takes place just below the temperature of the solidus. This is followed by accelerated cooling under inert gas, which results in the return to ambient temperature.

There are numerous advantages of vacuum brazing. The pieces are clean after leaving the furnace. There is no risk of corrosion and no risk of formation that includes flux in the brazed joint. It is easy to braze small or large pieces that are complicated in form and even of closed shape.

Brazing in a nitrogen convection charge furnace makes it possible to braze several aluminum assemblies in flux simultaneously. The initial vacuum purge allows the atmosphere of the furnace to be conditioned nearly instantaneously. It takes no time to start up or change the production run.

The atmosphere characteristics of the brazing furnaces, temperature, level of vacuum or humidity, and oxygen content are recorded. The archives guarantee the total traceability of brazing conditions for every lot. IH

Brazing a Heat Exchanger Load in an Inert-Gas Vacuum Furnace

The choice of parameters that defines the brazing cycle represents the know-how of every brazer.

As is the case for any brazing, the dwell temperature and time parameters are essential. More specifically, it should be noted that a balance is found between the size of the assembly and the thickness of the finest elements. It is necessary to achieve a certain temperature to guarantee the complete brazing of the device. However, time is taken into account from the start of the brazing fusion. Silicon, which is present in a large concentration in the filler metal, will migrate from the liquid phase to a base metal. The local enrichment in silicon will be important, especially for thin parts. It causes a decrease in the melting point. A dwell time that is too long translates into the localized melting of the finest elements of the assembly.

In our case, the following parameters have been noted: 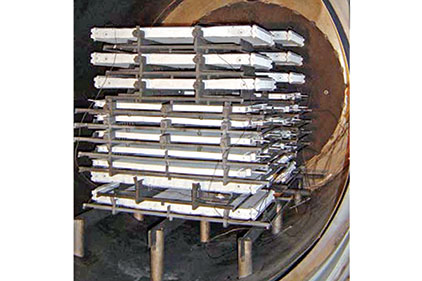 The results have been determined based on an industrial load that consists of 28 exchangers on their assembly. The entire load has undergone a unit leak test. In addition, certain devices were intended for metallographic study and destructive tests.

The inspections that have been performed on the brazed assemblies have been convincing, whether it be the impermeability or the structure. No leak was recorded. The assemblies do not show any traces of intergranular oxidation or excessive melting of certain zones.