Another distinguishing characteristic of DCT is the timing of the treatment, where the object being treated has its temperature slowly reduced into the cryogenic range. This reduction in temperature is on the order of four to 10 hours. The temperature is then held at a low cryogenic temperature for a period of time – about four to eight hours. This may be followed by a tempering cycle, depending on what material is being treated (Fig. 1).

Many researchers try to circumvent the timing of the process by immersing materials in liquid nitrogen or liquid helium. At best, there is no change in the performance of the material; at worst, there is catastrophic failure. Unfortunately, the results of these experiments are usually cited as proof that DCT does not work. Just recently, Controlled Thermal Processing was contacted by a customer who tried to treat the wire he used in his products by having a famous university lab immerse it in liquid helium. He did not get the results we produce for him and wanted to know why. Not performing the process correctly is like trying to harden D2 steel – an air-hardening steel – with an acetylene torch for heat and a bucket of water for quenching and then complaining that heat treating does not work.

We are also finding that equipment is important. We’ve seen everything from Styrofoam™ ice chests to converted ovens used in an attempt to treat materials. Equipment used for DCT needs to be designed such that the time/temperature profiles are followed (Fig. 2). The equipment must also have good insulation so that the use of liquid nitrogen is minimized to keep the process economical. The introduction of the liquid nitrogen to the treatment chamber must be controlled so it does not hit the part, causing stress and instant cooling on the surface.

DCT is not a mature process as is heat treatment. There is evidence of heat treatment of metals as far back as 8,000 years. Cryogenic temperatures have only been obtainable on earth in industrial quantities for a little over 100 years. For a lot of that time, the general thought was that once something was frozen, it could not change. Our efforts to trace DCT history show that it was not commercially used until the late 1930s. Because of this, DCT is “new” and has not seen the amount of research that heat treating, in general, has seen. There is more and more research being done now, and we are seeing the research change from questioning if DCT works to questioning why it works and what the best processing parameters are.

Note that we talk about material instead of steel. One of the things happening with DCT is modification of the crystal lattice structure. DCT has applications with most metals and some plastics.

There is substantial evidence to prove that a lot of the effects of DCT have to do with the changing of the atom-to-atom relationship in the crystal lattice structure. Most metallurgical educations start with descriptions of the crystal structure. For instance, point defects in crystalline materials are temperature-dependent. The number of defects at equilibrium at a given temperature can be mathematically determined as: 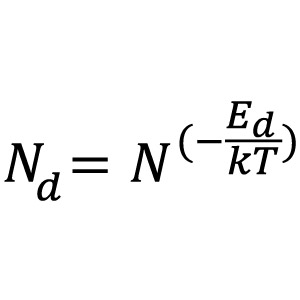 where Nd is the number of defects, N is the total number of atomic sites, Ed is the activation energy necessary to form the defect, k is the Boltzmann constant and T is the absolute temperature.

Note that it takes time for the equilibrium to be attained, and the rate of reduction of point defects drops exponentially as temperature decreases. Thus, it is possible to “freeze in” point defects by dropping the temperature too quickly. This is one of the reasons for the slow descent in temperature when performing DCT.

Also affected by temperature is the solubility of alloying elements in the matrix. The solubility drops as the temperature decreases, causing the elements to rearrange themselves and precipitate out of the matrix. This is probably why we get the formation of carbides in ferrous metals that are DCT treated when the alloying elements combine with free carbon in the microstructure. Again, time is needed for these reactions to happen, and a sudden reduction in temperature does not allow enough time for this to happen.

One of the biggest controversies with cryogenic processing is some of the wild and unsupported claims that people have made as to the effects of the process. Claims such as “no one has blown up a cryo-treated engine” or tenfold increases in the tensile strength of steel have done damage to the reputation of the process. These claims came from companies that had little metallurgical knowledge and were trying to sell the process. This type of behavior, for the most part, stopped as the process and its benefits became more established.

On the other hand, research is showing that many of the claims that sounded exaggerated are not. For instance, we found in multiple laboratory and practical tests that the process does increase the life of automotive brake rotors (Fig. 3). This is despite the fact that the “experts” say that the only way the process can increase the wear resistance is to convert retained austenite to martensite.

The microstructure of brake rotors (Fig. 4) is pearlitic and has no austenite or martensite. Research literature also shows results on nonferrous metals and some plastics. Many of these applications will show no change in microstructure. And, yes, musical instruments and stereo gear also show results. Yamaha offers DCT on its brass instruments, and a growing number of stereo manufacturers are offering treated components.

Another item holding DCT back is that it is rarely taught in colleges and universities. It is not unusual for metallurgists to state that they have never heard of the process. And again, many are sure that it is just cold treating using colder temperatures and then try to explain it will do nothing. This, as pointed out previously, is a result of not really looking into the effects of temperature on crystal structure.

The Cryogenic Society of America has created a database that lists research and information articles on the subject. This database is available to anyone at http://www.cryogenictreatmentdatabase.org/. The research papers are growing in number and are starting to move away from proving that DCT works and move toward finding the optimum processing parameters for a given material and finding out why the process works.

DCT holds a promise of reducing costs of products and tooling (Fig. 5). It can make products superior to their competitors, but this has actually slowed the adoption of the process down considerably. Most manufacturers are very nervous about introducing a product that could last three to four times longer than their current product.

Yes, the process is still not a totally sophisticated, completely explained phenomenon. Heat-treating procedures were not sophisticated or totally explained for the first 5,800 or so years of use either, yet they were used extensively. Transcontinental railroads, cars and airplanes were produced using heat-treated steel before we understood the heat-treating process. We’ve only had cryogenic temperatures for a little over 100 years. It is going to take time and research to find why DCT produces its astounding results.

J. Diekman, president, Controlled Thermal Processing, Inc.; Antioch Ill.
You must login or register in order to post a comment.