Energy: Why Lock In Now? 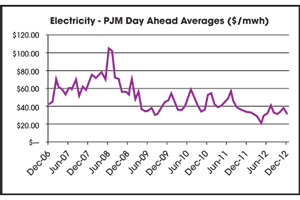 After reaching historically low levels in April 2012, electricity and natural gas prices are forecast to trend upward in 2013 and 2014. Now is an exceptional time to consider a fixed-price supplier contract that locks in your price for one to five years. Even if your current contract hasn’t expired, you can consider prices now for 2015 and later. Here are some facts about electricity and natural gas to think about.

•    The 2012 winter season was the mildest on record in the U.S. The 2013 winter season is forecast to be normal or colder-than-normal in most regions of the country, which will increase demand for heat and cause electricity prices to uptick.

•     According to the Edison Electric Institute, necessary upgrades to the nation’s electricity transmission infrastructure will cost $54 billion from 2011 to 2014.

•     The United States Energy Information Administration (EIA) reports that more plants are switching from coal to natural-gas-fired electricity generation each month to reduce costs and comply with EPA regulations.

•    The EIA reports that this increased use of natural gas for electricity generation will drive electricity prices higher as gas prices increase.

•   Shale gas is plentiful, but it is becoming more costly to extract and deliver because of regulatory and transportation costs.

•   Natural gas in storage recently reached capacity. As the supply surplus is reduced, prices will increase.

APPI Energy, MTI’s official energy consultant, is helping members minimize their energy costs by providing effective energy strategies. If you would like them to do a free energy-saving analysis, contact Kathy Kiernan at 800-520-6685 or kkiernan@appienergy.com.