Knowing where carbonaceous deposits come from and why they occur in hydrogen annealing of steel strip is the first step in reducing or eliminating them.

Steel strip, rod and wire products usually are heat treated in a controlled atmosphere during their manufacture to maintain a high-quality surface while improving their formability. Consistency and reliability in surface quality are important, particularly for products that will be painted or hot-dip and electrolytically galvanized before shipping. Continuous annealing furnaces (strand annealers, etc.) working separately or as a part of a continuous process line provide higher surface quality than batch furnaces.

However, advanced bell type furnaces made by furnace manufacturers including Ebner Furnaces Inc. (Ebner HICON/H2 bell type furnaces shown in Fig. 1), LOI Inc., Rad-Con and others can provide surface quality comparable to that of a continuous hydrogen-annealed product, and are more accessible and adaptable to change than continuous annealing furnaces. In addition, these high-integrity batch furnaces are compatible with 100% hydrogen atmosphere. Usually, the hydrogen content in the furnace atmosphere varies between 83 and 92%, never reaching 100%, during soaking and cooling phases of the annealing tests. During the annealing cycle, 100% high-purity hydrogen is introduced into the furnace (the retort of a bell type furnace). However, the furnace atmosphere in the retort never reaches 100% hydrogen because the product to be annealed and the furnace base, devices such as dividers and the retort are not perfectly clean, and lubricant vapor, methane, water vapor and other components are present in different amounts during the annealing cycle.

A measure of the surface quality of cold-rolled products is surface cleanliness, which is characterized by carbonaceous deposits, iron fines and oxides present on the strip [1]. The surface quality of steel strip annealed in hydrogen is significantly better than that of the strip annealed in a nitrogen plus 5 to 7% hydrogen atmosphere or in an exothermic atmosphere due to the improved evaporation and evacuation of lubricants on the product during heat up. However, carbonaceous deposition on steel strip is occasionally encountered in 100% hydrogen annealing. Even a thin film of a carbonaceous deposit on the surface of the annealed steel strip interferes with the subsequent coating process.

Sources of problems in hydrogen annealing in batch furnaces stem from:

The following are causes of carbonaceous deposits during annealing that are related to and complementary to the above-mentioned general main causes:

Occasionally, carbonaceous deposition occurs in hydrogen atmosphere annealing in advanced bell type furnaces. In many cases, it is possible to reduce or eliminate the problem of carbonaceous deposition encountered in hydrogen annealing of cold rolled steel strip by optimizing the hydrogen flow rate, the hydrogen flow rate pattern and the timing and frequency of turning on and off hydrogen flow at the end of soaking and beginning of cooling stages of the annealing cycle, and, thus, reap the full benefits of 100% hydrogen atmosphere and advanced bell type furnaces. 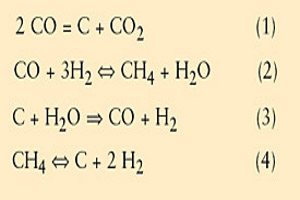 A comparison between HNX (purified exothermic and nitrogen + 5 to 8% hydrogen) atmospheres and hydrogen atmosphere annealing of strip steel in a bell type furnace is given in Ref. 2-4. In HNX annealing, the atmosphere flow usually is shut off by closing the exhaust valve during the second part of soaking and/or cooling to reduce atmosphere consumption in cubic feet/ton. This is possible in HNX annealing because the concentrations of carbon dioxide (CO2), carbon monoxide (CO) and methane (CH4) in the furnace atmosphere significantly decrease after reaching peak concentrations during heating up. Closing the exhaust valve in 100% hydrogen annealing during the second part or the last hours of soaking and the first hours of cooling may produce heavy carbonaceous deposits. A detailed description of the gas-metal reactions in 100% hydrogen annealing in five different temperature ranges, the effect of degreasing before annealing, the effect of internal thermal stress and other valuable information are given in [2-4].

One reason a carbonaceous deposit (C) is obtained can be explained by the decomposition of CO (a Boudouard, or producer-gas, reaction) present in the furnace atmosphere in the critical temperature range for sooting of 500 to 300 C (932 to 572 F) given by Equation 1.

The rate of decomposition of CO at temperatures lower than 700 C (1292 F) is slow unless it is promoted by a catalytic surface, such as iron, so the surface of the steel strip and possible iron fines serve as catalysts. A hydrogen atmosphere has a very high actual (CO)2/CO2 ratio [2] in reaction (1); much higher than the equilibrium (CO)2/CO2 ratio in the sooting temperature range. The carbonaceous residue after the evaporation and evacuation of lubricant is labeled CTAR [2-4] to distinguish it from both the carbon deposit in reaction (1) labeled CSOOT and the carbon deposit resulting from the possible limited decarburization of low-carbon steel strip [5,6]. In this discussion, C represents all types of carbon deposit on the steel strip.

Surface-carbon removal is possible by means of a Fischer-Tropsch, or direct methanation, reaction in hydrogen atmosphere and by turning the hydrogen flow on and off at the end of soaking and the beginning of cooling stages of the annealing cycle used in high-convection, advanced bell type furnaces [2-4].

Methanation in a H2 atmosphere

High convection-high hydrogen flow technology uses methanation to remove carbon deposits and to provide a very clean annealed steel-strip surface [2-4]. Methane is the most stable hydrocarbon. However, it is thermodynamically unstable at temperatures higher than 500 C (932 F). Increasing temperatures favor methane dissociation according to the reversible reaction [7] in Equation 4.

Unlike annealing cycles using HNX atmospheres, where hydrogen is shut off to reduce consumption of hydrogen per ton of annealed steel strip, hydrogen flow cannot be turned off during the second part of soaking stage (or at the end of soaking stage) and/or at the beginning of the cooling stage using a 100% hydrogen atmosphere.

To evacuate the products (CH4 and H2O) of reaction (2) and to avoid carbon back deposition by producing CO and carbon deposition according to reaction (1), (2) and (4), it is recommended to turn the hydrogen flow on and off at the end of soaking stage and beginning of the cooling stage of the annealing cycle [2-4]. An alternative solution to the on/off hydrogen feed is to use a continuous high hydrogen flow rate during the second part of soaking and beginning of cooling stage, which could significantly increase the consumption of hydrogen per ton of annealed product from 3 to 20 m3/metric ton (100 to 640 ft3/ton) of annealed steel strip, and, consequently, increase operating costs.

Be Aware of the ‘Fine Print' In the Science of Metallurgy of Induction Hardening: Part 1